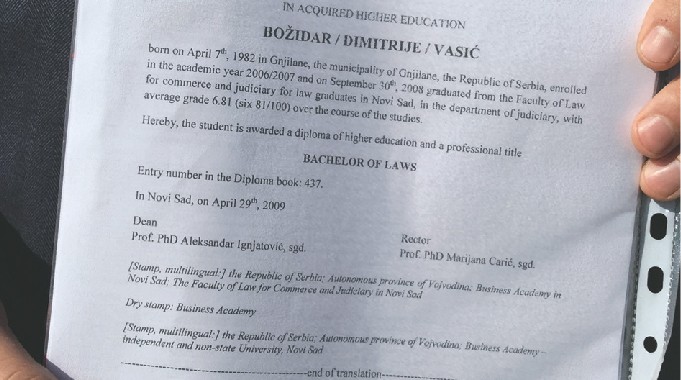 Kosovo and Serbia’s refusal to recognize each other’s educational qualifications is hurting minorities in both countries.

It is a quiet, sunny Friday at Bora Stankovic School in Koretiste, outside Gjilan, and students are streaming out of school, ready for the weekend. The school, which has 95 pupils, still operates as part of Serbia’s school system, with the curriculum and funding coming from Serbia, although the Kosovo government covers the electricity bill.

Papier maché Easter eggs from the Orthodox Easter holiday are displayed on a table on the second floor, and murals of the Serbian Orthodox Saint, St Sava, greet students in the hallway. School director Predrag Djekic’s office is full of paintings commissioned in honor of the 70th anniversary of the school, celebrated in March.

While Bora Stankovic is likely one of Kosovo’s oldest schools, Djekic is forward-looking: he supports his community’s integration into Kosovo society, saying his students need the option of studying the Albanian language.

School secretary Bozidar Vasic, born and raised in the village, agrees. After working here for five years, he likes his job but is growing restless. Vasic graduated in law from Novi Sad, in Serbia, and his real ambition is to become a lawyer.

“I live here [in Kosovo], so it is only logical for me to want to participate in this legal system,” he says. “I am someone who wants to integrate.”

Unfortunately for him and many others, however, Serbia and Kosovo still do not recognize each other’s university diplomas, despite having reached an agreement to do so. 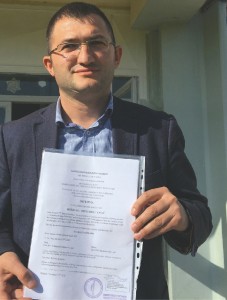 This is a serious problem for their national minorities, as neither can study in higher education in any language other than that of the majority community.

Serbs in Kosovo who want to pursue higher educational studies in their native language need to go to the University of Pristina, relocated in North Mitrovica, which Kosovo’s educational system does not recognize – or go to a university in Serbia. Many Albanians in Serbia choose to get educated in Kosovo.

In November 2011, under EU pressure, technical experts from both countries agreed on a deal to facilitate mutual recognition of diplomas. The university in North Mitrovica was not included in the deal, however.

The two parties agreed that SPARK, a Dutch NGO, would send applications for certification to the European University Association, EUA, a Brussels-based body representing higher education institutions in 47 countries.

Three-and-a-half years later, the EUA has certified more than 300 diplomas from Kosovo and 25 from Serbia. But only five diplomas have been recognized, all from Kosovo.

“None of the EUA documents issued to candidates with degrees from Serbia have been recognized in Kosovo,” Kosovo’s Education Minister, Arsim Bajrami, admits, blaming the lack of an administrative directive to regulate this procedure in the ministry.

He says that in cooperation with SPARK, the ministry is in the final stages of drafting an administrative instruction on the procedures for handling high school diplomas and college degrees obtained in Serbia. 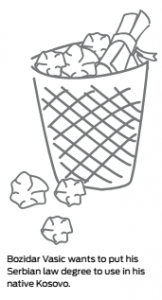 The minister in Kosovo responsible for the EU-led dialogue with Serbia, Edita Tahiri, said Kosovo’s failure to recognize Serbian diplomas was also retaliation for an additional procedure that Serbia tacked on for the five students whose diplomas from Kosovo were recognized.

“We have only to implement the agreements which we accepted,” she said. “We are not ready to re-open any. If we re-open this one, then the door is open for others.”

In May 2014, Serbia’s Constitutional Court ruled that the government decree on recognizing Kosovo diplomas was unconstitutional. However, that November, the Serbian government issued a new decree enabling recognition.

A spokeswoman for Serbia’s education ministry could not say how many diplomas from Kosovo Serbia had recognized, as the system in Serbia is de-centralized. But, SPARK executive director Yannick DuPont confirmed at least five.

Vasic has meanwhile spent hundreds of euros translating his diploma English, traveling to Belgrade to present it to SPARK, and fulfilling all the criteria laid down in the process. But he has gotten nowhere.

“I want to stay here in Koretiste with my family but these political agreements are making this impossible,” he says.

Just across the border from Kosovo in Medvedja, in southern Serbia, Besa Ismajili feels equally frustrated.

No Alba
nians serve in the local police service, even though the majority of the community are Albanian. Ismajili chose to study in Pristina, to be educated in her native Albanian language, graduating in 2008. She continues to pursue a master’s degree in criminology as the same college.

Now working as an elementary school teacher, she has also taken all the necessary steps for diploma recognition: translation, application through SPARK to the EUA, and additional steps with a university in southern Serbia.

“I started this process more than two years ago,” she explains. “I’ve been bouncing back and forth between the Serbian Ministry of Education and the University in Nis, even though they don’t have a criminology program.

“When they signed this agreement, they said the door was open, that if I did what I needed to do my diploma would be recognized; they said life would be easier.

“Two years later, I don’t believe them. I am not sure if this process to recognize diplomas was serious, or was just intended to distract attention from this problem,” she adds.

Without Serbian recognition of her diploma from Pristina, she is concerned for her ability to provide for herself and her family.

“Since I cannot work as a police officer now, I’m working as a teacher at an elementary school, but every day I’m waiting for the director to send me home because I’m not qualified for this job either [without a recognized diploma],” Ismajili says.

The problem about diplomats affects Kosovo’s non-Serbian minorities as well. Edis Jonuzi, a Bosniak from Prizren, and several of his friends, have been trying to get Kosovo to recognize their diplomas obtained in Serbia.

Jonuzi would not be able to study in Serbia with his Kosovo passport, as Kosovars cannot stay in Serbia for more than 15 days at a time, but he has a Serbian passport as well. High school documents also need to be acceptable to Serbia; Kosovo documents are not, but Jonuzi finished high school in Sarajevo, Bosnia.

Over a coffee in Prizren, he shows a stack of official requests sent to any institution that could help: the Ministry of Education, Ministry of Health, Prime Minister’s Office, Ombudsperson, EU Special Representative Samuel Zbogar, and various embassies.

He says his employers were ready to hire him as soon as he got a license to practice. He completed the certification process through the EUA in January 2013. However, Kosovo still has not recognized his diploma, so he is stuck.

“I’ve had to work as a chauffeur, construction worker and a translator to take care of my family,” he says. “This keeps us back because we are forbidden to work in the field that we studied. We cannot undertake any specialization and are kept from further studies.”

Jonuzi’s friend, Jasmin, studied dentistry in Belgrade. He is also unable to get a license in Kosovo although he has been lucky enough to find work in his father’s private clinic. However, he risks a 5,000 euro fine every day that he goes to work.

“The paradox is that buses are leaving Kosovo every day full of people seeking medical treatment in Belgrade,” he says. “We went there, got that knowledge, and brought it back here, and we aren’t even allowed to use it.”

Jonuzi feels like a second-class citizen. “I’m not from Mexico, I didn’t fall from Mars, I am a citizen of Kosovo. But the state will not recognize us as people,” he says. “ I just want the country where I pay taxes and bills for water and energy to recognize my rights.”

Back in Koretiste, the future of the pupils at Bora Stankovic remains unclear. On the front door to the school is a poster encouraging students to apply to the University of Pristina. Underneath is the university’s address: Kosovska Mitrovica, the Serbian name for Mitrovica.

The Serbian faculty of the University of Pristina was founded after the 1998-99 war in Kosovo and teaches only in Serbian. Most Kosovo Serbs who seek higher education do so at the college, which has some 12,000 students. However, its degrees have no official standing in Kosovo or in many other countries.

The university was not mentioned in the 2011 agreement, as the issue was too contentious at the time, according to former Serbian negotiator, Borko Stefanovic, and negotiators from the Kosovo government.

Many students here do not necessarily want jobs in Kosovo, but some do. “My degree is only recognised in countries that have not recognised Kosovo,” complains Dragic Brdar, a medical student from Croatia. “My parents invested a lot in me. I’ve invested a lot of effort into my education. Years and years of learning … Why? For nothing.”

In mid-April, the Kosovo government put forward a plan to find a solution for the unresolved status of the university, which will eventually enable its graduates to work in public sector jobs requiring a university diploma. This is sorely needed, as Kosovo Serbs are poorly represented in Kosovo institutions.

According to the plan, which Kosovo’s parliament must approve, the government will set up a temporary commission with a two-year mandate to issue “certificates to individual graduates that will be used in their job application process.”

This plan holds out promise for the integration of Serbs into the Kosovo system. But mutual recognition of diplomas from Kosovo and Serbia remains a far-off prospect.

Vasic says there are no Serb judges or prosecutors in the court in Kamenice, the closest town with a court. He dreams one day of serving there as a judge or prosecutor, but he’s frustrated that in the past five years, he has lost out on opportunities that would let him get on-the-job training.

He says the lack of recognition and ability to progress is killing the motivation of people who want to contribute positively to Kosovo society.

“When you cannot progress in what you have studied to do and in what you are interested in, you lose your nerves and it suffocates your ambition,” Vasic says.

Jonuzi says he wishes he could trade places with his brother who joined the mass exodus of Kosovars seeking asylum in Western Europe during the winter. At least he could have looked for employment in Belgrade instead of coming home to look after his aging mother. “The worst thing I did in my life was to come back to Kosovo. Asylum seekers in France live is better than this,” Jonuzi says.

This story was written as part of BIG DEAL, a civic oversight project examining the implementation of agreements between Kosovo and Serbia. The project is being implemented by BIRN Kosovo, Internews Kosova and Center for Research, Transparency and Accountability – CRTA, with support from the British Foreign & Commonwealth Office and the Rockefeller Brothers Fund.