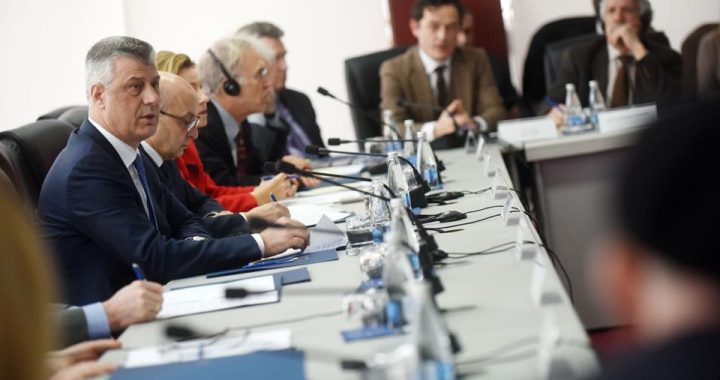 President Thaci and Prime Minister Mustafa in the first session introducing the Truth and Reconciliation Commission. | Photo courtesy of the Office of the President.

Kosovo President Hashim Thaci announced his plan to establish an independent commission for truth and reconciliation which has been met by support and criticism.

During the consultative meeting for the establishment of the commission, President Thaci claimed that the initiative was unique in the Balkans, adding that an apology from Serbia was not a condition for the commission’s work to begin.

“Someone might ask whether there will be an apology first, and then reconciliation. But truth and reconciliation aren’t achieved with conditions, but with good will and conscience. The apology is a reminder – let’s remember and not use the right to seek revenge,” said Thaci, who added that truth must be told regardless of “how bitter or ugly” it was.

“Younger generations must know what previous generations have done; children should know about their parents,” said the president.  “Mutual trust must be won, not by denying, but by taking responsibility and by respecting the dignity and integrity of all parties.”

Around 12,000 people were killed by Serbian forces during the war in 1998-1999 and around one million were kicked out of their homes.

Thaci’s Truth and Reconciliation Commission will not be the first initiative to attempt to deal with Kosovo’s recent past. In 2012, the government, which was then led by Thaci in his capacity as prime minister, established an ‘Inter-ministerial Working Group for Dealing with the Past and Reconciliation.’ The concrete achievements of the working group are unclear.

Since 2008, the Coalition for Recom has been advocating for the formation of a regional-wide commission for the establishment of facts about the war crimes in the former-Yugoslav countries.

Assembly Speaker Kadri Veseli also expressed his support for the commission by emphasizing that the acts perpetrated by the Serbian state cannot be forgotten.

“There are thousands of innocent victims who still await justice. There are tens of massacres that were committed during the war for which no one has been found guilty. Unfortunately, the Serbian state hasn’t even condoned these. Those who committed these crimes continue to live in freedom, waiting for time to erase and cover their monstrous crimes with oblivion,” said Veseli.

The Kosovo Prime Minister Isa Mustafa and the U.S. Ambassador Greg Delawie expressed their unconditional support for the Commission.

However, Ambassador Daan Everts, a former chief of the OSCE Mission in Kosovo, was sceptic about the Commission’s potential efficiency.

“To correct the president, this isn’t the first attempt of this kind in the Balkans, there was an initiative in Kostanica for Croatian-Serb reconciliation that failed. This commission needs to find a common goal among both ethnicities and a credible person that represents both communities to lead this initiative,” said Everts.

The head of the Kosovo office of the Humanitarian Law Center Bekim Blakaj told Prishtina Insight that it is too early to judge whether Thaci’s initiative can be implemented. He is doubtful that the idea could work if it were based only in Kosovo.

“This commission should have a regional component. There should have been a common Commission, not only with Serbia but with all the former-Yugoslavia countries,” said Blakaj.

According to Blakaj, the most important parts have yet to be revealed: the commission’s mission and its scope.

“It could have been formed two years ago, but it’s not too late. But the issue at the core of this commission is: how will they investigate and what period of time?” he said.

Blakaj also added that the initiative revealed today will fail if it is not followed up by concrete actions.