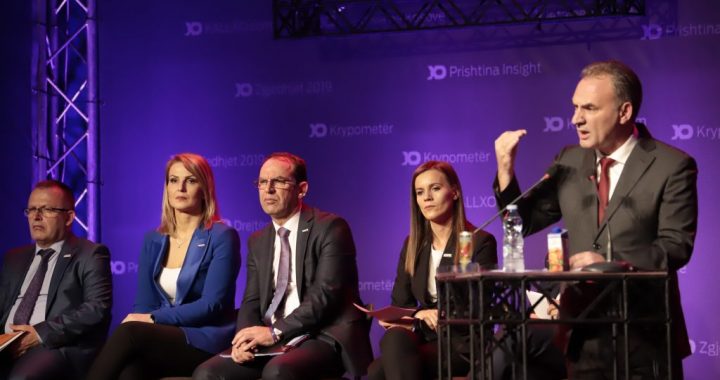 The team behind the prime ministerial candidate for the NISMA-AKR-PD coalition were the last to introduce their governing plans on BIRN’s televised program, Jeta ne Kosove, exhibiting their priorities and responding to criticism for their role in previous governments.

On Sunday night, the coalition of the Social Democratic Initiative, NISMA, the New Kosovo Alliance, AKR and the Justice Party, PD, presented their program in front of a panel of experts on BIRN’s televised debate, Jeta ne Kosove.

The three part coalition were almost entirely represented by members of NISMA, including candidate for prime minister and NISMA leader, Fatmir Limaj. Of the other two parties, just one member of AKR, Fatmir Matoshi, the outgoing Minister of Environment and Spatial Planning, made an appearance.

In the previous elections in June 2017, NISMA ran as part of the ‘PAN’ coalition alongside the Democratic Party of Kosovo, PDK, and the Alliance for the Future of Kosovo, AAK.

AKR meanwhile, ran in coalition with the Democratic League of Kosovo, LDK, and Alternativa to form what was known as the ‘LAA’ coalition. However, the party defected after the election results to give PAN enough seats to be able to form a government. Their ‘kingmaker’ status reaped the party large rewards, with AKR leading more ministries than they had members of parliament.

On Sunday night, Limaj’s team introduced some of their key priorities for governance, though judging by the statements made in the buildup to the elections, the coalition does not appear to be aiming to nominate a candidate for prime minister by coming in first place. Instead, with no party likely to win an outright majority, NISMA-AKR-PD will look to be part of another coalition government, with no party ruled out as a potential partner.

Skender Recica, the outgoing Minister of Labor and Social Welfare made the opening remarks in the debate, describing the progress NISMA made while part of the PAN coalition government, before outlining six ‘pillars’ of the coalition’s social platform: protecting workers’ rights, reforming pensions, improving social and family services, improving the lives of people with disabilities, and schemes for social benefits and finding employment.

In regard to their record while in office, a comment followed from panelist Vehbi Mujku, reminding Recica that before he took office Kosovo had 25,000 families under a social welfare scheme, receiving 107 euros per month, figures that remained the same at the end of his mandate. Mujku also reminded the former minister that at the previous elections his party promised Kosovo citizens that one member of each family would be employed, a situation which is far from the case today.

Recica responded that employing one member from each family is becoming a ‘reality’.

“We need to learn to treat each citizen of Kosovo equally,” Recica replied. “There are more than 20-30 citizens of Roma, Ashkali and Egyptian that I’ve managed to put within the labor market.”

As Recica revealed that only 20 to 30 people from some of the three most marginalized communities in Kosovo had been employed in the public sector under his mandate, panelists started to mention the names of family members of NISMA leader who found a job in the executive bodies led by the party. Limaj’s son was employed at the Ministry of Trade, his sister-in-law at the Ministry of Diaspora and Strategic Investment, while his brother was promoted to assistant professor of economics at the University of Prizren.

As the debate switched to the topic of the diaspora, Liza Gashi from the Germin NGO, claimed that in the last 24 hours, 10 people linked to NISMA received a contract within the Ministry of Diaspora and Strategic investments.

Limaj at first refused to respond to the accusation saying that he would like to talk about the potential of the diaspora but when pushed by the debate’s anchor, Jeta Xharra, he said: “Well, you are derailing me from the topic, but these are the people of this country… I think you should be interested to know whether the law was respected, was the vacancy respected, is she professional, etc.”

More money for agriculture, no big power plants and health insurance within a year

Vesel Krasniqi, another candidate for MP from the coalition, pledged that NISMA-AKR-PD is committed to increasing the amount of government subsidies available to the agricultural sector by 500 million euros. He also pledged that the budget of Kosovo would almost double to 3.5 billion euros from the roughly 2 billion euros it is now. However, suggestions as to how this extra revenue will be raised both in the agricultural sector and the budget generally did not emerge.

Another NISMA candidate for MP, Agim Caka, promised that the budget of the Ministry of Health would also increase from 220 to 300 million euros, and that the health insurance system would be functionalized within the first year of governance.

The Law on Health Insurance passed at the Kosovo Assembly in 2014 but has never been implemented. Two key steps need to be taken: the creation of a digital database that would register services and medicine available to citizens under the scheme, and the collection of premiums from citizens to pay for the service.

All of Kosovo’s major parties have stressed the need to bring the system into operation, though Caka’s pledge to do so within a year is one of the shorter time frames provided. LDK and Vetevendosje have both promised the functionalization of the health insurance system within a four-year mandate, while AAK-PSD described the functionalization of the electronic system as a top priority but did not commit to an exact date for its completion.

PDK’s Uran Ismajli who led the Ministry of Health in the previous government, promised in 2017 that 2019 will be the year of Health Insurance. As part of this election campaign, he has now pledged that the system will be functionalized within eight months if PDK once again lead the ministry.

On environmental issues, Limaj revealed at the debate that he is against implementing the contract with Contour Global to build another lignite power plant in Kosovo, which was signed by the previous coalition government in which he was deputy prime minister. It is a position not previously expressed either by Limaj or NISMA-AKR-PD, who did not address the topic in their election program.

Limaj stated that Kosovo should meet its energy needs through smaller power plants with production limited to 300 megawatts financed through a partnership of public and private capital, as opposed to large scale projects like Kosova e Re. “We have advised our parliamentary group that we should not vote for such a project, because as such the contract is not favourable to Kosovo,” he stated.

More kindergartens and staff in the judiciary

NISMA led the Ministry of Education in the previous coalition government, where accusations of nepotism also surfaced. During the debate, youth activist Dafina Krasniqi reeled off a list of people employed in various departments of the Ministry of Education. Limaj was again defensive against the accusations. “My brother, Demir, has a science PhD. Why shouldn’t he be a professor?,” he replied.

In terms of future policies for education, NISMA’s Albulena Balaj-Halimaj stated that creating more kindergartens is a top priority, adding that there are schools with a lot of free space that could be utilized as kindergartens for 0-4 year old. She added that professional schools were also a priority for the coalition, as was the need to link both these schools and the country’s public universities with the labor market.

As a professional lawyer, Limaj felt confident on outlining policies relating to the judiciary himself. The coalition’s plans echo most of the major parties, who all state that there is a need for most staff to be hired in the judiciary, especially more legal experts as support to judges. Limaj also stated that measuring the performance is crucial. “A prosecutor who failed to prosecute five or six indictments should not be promoted,” he said.

All prime ministerial candidates were interviewed. However, the Democratic Party of Kosovo candidate, Kadri Veseli, canceled his interview for Jeta ne Kosove (Life in Kosovo), despite previously confirming his attendance.