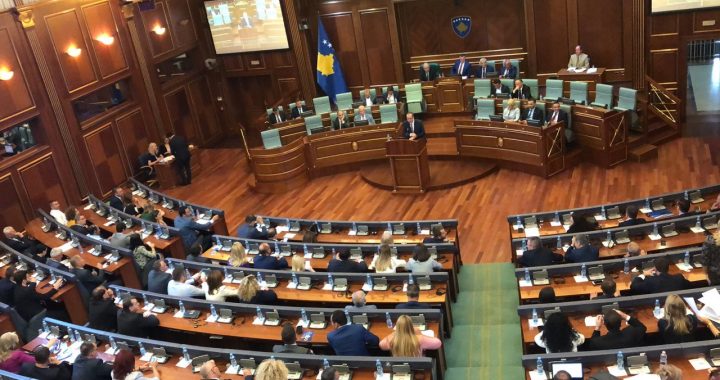 With 89 votes in favor, two abstentions and one against, a motion of no confidence was passed in the Assembly on Thursday triggering snap parliamentary elections, which will take place within the next 45 days.

MPs in the Kosovo Assembly have voted in favor of dissolution of the Assembly, triggering early elections.

According to the Constitution, two-thirds of Kosovo’s 120 MPs were required to vote in favor, meaning 80 votes had to be reached for the no confidence motion to succeed. In the end, 92 votes were cast in the Assembly, with 89 in favor of the motion, two abstentions and one vote against.

105 out of 120 deputies were present at the session. Lista Srpska who were represented with 10 deputies did not participate.

Before the vote, heads of this mandate’s parliamentary groups were given the opportunity to hold a final address to the Assembly.

Head of the parliamentary group for the Democratic League of Kosovo, LDK, Avdullah Hoti, used his speech to criticize the outgoing government. “As opposition we faced a coalition that was not professional and based on narrow interests,” Hoti stated. “Only 30 percent of the legislative agenda was fulfilled.”

New elections will be held no later than 45 days from today, with October 6 the last available Sunday.

On Wednesday August 21, Valdete Daka, the head of the Central Election Commission, CEC, met with President Thaci to discuss the CEC’s preparation for snap elections. According to Koha Ditore, October 6 has been decided as the date when citizens will cast their votes.

Today’s session was scheduled on August 8, when the chairmanship of the Assembly of Kosovo decided that the no confidence motion in the government should be put to a vote. On July 19, outgoing Prime Minister Haradinaj resigned following a summons for questioning from the Specialist Prosecutor’s Office in The Hague. Ever since, political parties have unanimously expressed readiness for early elections.

As agreed earlier in the month, before dissolving the current composition of the assembly, MPs ratified the agreement on the Instrument of Pre-accession Assistance, IPA, that administers more than 100 million euros to different infrastructure and other projects, with all 103 deputies present at the time voting in favor.

This term at the Assembly has been criticized for its lack of functionality over the last two years, while there were more than 1,600 absences from sessions at the chamber. During 2018, more than 6 million euros from the state budget was paid to the Assembly with 80 percent of it allocated for salaries of MPs and other expenses.

“I hope there will be no other legislature as lazy as this one,” the now former speaker of the Assembly of Kosovo, Kadri Veseli, said in today’s session. Veseli himself had faced criticism from the heads of opposition parliamentary groups for blocking the work of the Assembly over the past two years.

Over the last decade, no Assembly composition has achieved to fulfill its full four-year mandate, demonstrating the levels of political instability in the country. In November 2010, June 2014 and June 2017, new elections were held following a vote of no confidence submitted to the Kosovo Assembly.