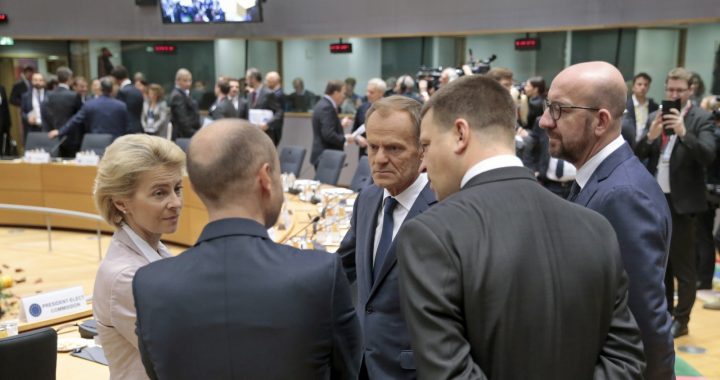 EU leaders at the European Council in Brussels. EPA-EFE/OLIVIER HOSLET

After days of wrangling at the European Council, France refused to budge from its opposition to giving North Macedonia and Albania a start date for membership talks – leaving EU enlargement policy in a state of confusion.

EU leaders meeting in Brussels on Friday failed to persuade France to allow a hoped-for start to accession talks for North Macedonia and Albania – and also failed to agree on a written conclusion, which, in the absence of a date for EU talks, would have sent a positive message to Skopje and Tirana about their further engagement in the process.

“We have agreed that we will remain focused on the subject and will return to it at the Western Balkan summit at spring next year,” German Chancellor Angela Merkel said in Brussels on Friday, expressing her disappointment.

The deadlock on enlargement drew sharp criticism from other EU leaders. The outgoing Enlargement Commissioner, Johannes Hahn, tweeted that it was a matter of “extreme disappointment” and that the citizens of the two Balkan countries were now “rightly disappointed to the bone”.

“The responsibility for this failure is not with the countries [North Macedonia and Albania] who hoped rightly for a positive decision. They delivered! It was the EU which failed to deliver because of internal issues. This damages the EU’s credibility not only in Western Balkans but beyond,” Hahn added in a related tweet.

“I have already exchanged views today with the prime ministers of both states and expressed my disappointment.” Both the Albanian and North Macedonian leaders were “very disappointed,” she said.

Italian Prime Minister Giuseppe Conte expressed hope that “this disappointment and anguish will not plunge [North Macedonia and Albania] into despair”, and added that Italy would remain close to both countries.

The failure to yield any breakthrough followed a reportedly a tense but ultimately fruitless debate on Thursday night between EU leaders that lasted well past midnight.

Belgian Prime Minister Charles Michel, who will soon become the new President of the European Council, said that the debate on enlargement had been “intense” but that the leaders had decided it was impossible to find agreement.

According to an unnamed diplomatic source present at the debate, cited by North Macedonia’s 360 degrees news portal, after it became clear that several compromise solutions – including one for a parallel decision on a start of accession talks along with a decision to back France’s demand for reforming and toughening the accession process – would not pass, a draft was prepared that would have postponed the decision for opening of accession talks to next spring.

But this was allegedly blocked by several countries seen as strong supporters of North Macedonia, led by Slovenia, Malta and Bulgaria, which argued that it was better to have no conclusions than harmful ones that offered no guarantees about the future.

“A new postponement, without a commitment that there will not be yet another postponement in April, is additionally harming EU credibility and discouraging the candidate countries, the anonymous diplomat was quoted as saying on Friday.

Bulgarian Prime Minister Boyko Borissov sounded more upbeat, saying the lack of a written conclusion at least “shows that the vast majority of countries opt ‘for’ the European perspective of both countries”.

Disappointment was clear in North Macedonia and in Albania. “The least that the European Union owes the region is to be straightforward with us. If there is no more consensus on the European future of the Western Balkans … the citizens deserve to know,” North Macedonia’s Foreign Minister, Nikola Dimitrov, tweeted on Friday. “While we wait for a renewed consensus, we must continue to defend true European values at home,” he added.

Amid opposition calls for a swift general election after the failure in Brussels, President Stevo Pendarovski called for national unity.  “Now is not the time for splits and apathy, or for negative feelings toward some countries. We need unity,” Pendarovski said in his public address on Friday, adding that he had called a meeting of top political leaders on Sunday.

Albanian Prime Minister Edi Rama told the media that he blamed the “no” from Brussels on Europe’s internal divisions. He also said he would rather continue working on reforms than accept opposition demands for snap general elections.

“If early elections would have solved the problem between Germany and France, I would have seriously considered that option,” he said.