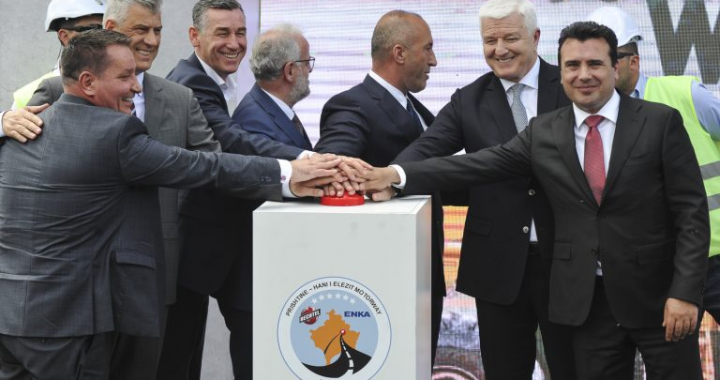 Inauguration of Arben Xhaferi motorway in May 2019. Photo: BIRN.

Another €32 million from Kosovo to Bechtel-Enka

BIRN has discovered that the outgoing Kosovo Government put in place plans for a further 32 million euros to be given to the American-Turkish construction consortium Bechtel-Enka, for additional work on the already inaugurated highway that connects Kosovo and North Macedonia.

The construction of the 60 kilometer ‘Arben Xhaferi’ highway that connects Kosovo with North Macedonia was completed in May 2019.

However, a further 32.2 million euros is set to be paid from Kosovo’s 2020 state budget for additional work that the American-Turkish consortium that built the highway, Bechtel-Enka, will likely carry out, including additional access roads to the highway in Ferizaj and Viti, and an overpass near the town of Hani i Elezit.

“The Ministry of Infrastructure requested that in 2020, 32,200,000 euros be allocated in order to conclude the project of constructing two access roads from Ferizaj and Viti to the ‘Arben Xhaferi’ highway, and an overpass in Hani i Elezit,” the Ministry of Finance told BIRN.

The Ministry of Infrastructure revealed to BIRN that the agreement reached in principle with Bechtel-Enka in May is now in the process of being signed. However, the ministry did not open any tendering process for this project before reaching the agreement with the American-Turkish consortium, going against the spirit of equal competition and avoiding public oversight.

Lekaj justified giving Bechtel-Enka additional work without any bidding process, saying it was being done to avoid lengthy procurement procedures.

“In order to ensure technical standards, avoid prolonged procurement procedures and the cost of mobilization as well as implement higher decisions, it is recommended that the government take the decision to build two new connections on the R6 motorway to Ferizaj and Viti as well as construction and construction of the overpass in Paldenica, through the negotiation procedure with the Bechtel-Enka Consortium,” Lekaj said when the decision was made on May 28.

In August 2019, the Kosovo Special Prosecution opened an investigation into the payment of a 53 million euro fine to Bechtel-Enka, levied due to the delays of the Government in making payments for the construction of the highway. The consortium also failed to meet deadlines during the construction of the highway, but as yet have not been fined, despite promises by Lekaj.

Construction of the highway started in 2014 and was scheduled to finish in early 2018 with a foreseen budget of around 600 million euros. In September 2017, the government reached an agreement with Bechtel-Enka to open the highway at the end of 2018 instead, as reported by BIRN. The highway was eventually inaugurated in May 2019 and cost over 700 million euros.