The long road to becoming captain

Edona Kryeziu joined her first football club at the age of 12, travelling for four hours between a village in Kamenica and Prishtina for training sessions and matches. More than a decade on, she is at the top of the women’s game in Kosovo.

On the football field Edona Kryeziu has always competed fiercely with her rivals, but outside of the white lines of the pitch she has also had battles to overcome.

First off, there are the typical prejudices that ‘football is a man’s sport,’ which she has faced ever since she first started playing as a child in the village of Rogacica, near Kamenica in the east of Kosovo. Growing up, not many girls in the region had the desire to play the game, so in order to get her fix Kryeziu had to compete with the boys.

“At first, I started practicing by playing football in the neighborhood with the boys,” she tells BIRN. “Then I played in competitions at school, again with the boys, though I also had a classmate who loved football as well.”

From those beginnings, Kryeziu, now 24, has captained Kosovo’s women’s football team and won back to back titles with her team KFF Mitrovica, who have dominated Kosovar women’s football over the last two years. For those that have worked closest with her, she is a woman who embodies the struggles, sacrifice, talent, and dedication required to realize a dream.

From Kamenica to Prishtina

Kryeziu’s first time playing without the boys came at the age of 12, when her friend learned about a women’s team in the capital city, 90 kilometers away from her village in Kamenica.

“My best friend discovered that there was a club for girls playing football in Prishtina,” she says. “I told my dad to take me.” Her parents agreed to accompany Kryeziu on a trip to Prishtina to visit the club. It was Edona’s first ever time walking the streets of the capital.

Back then, the head coach at the club was Aferdita Fazlija, who now manages the Kosovo women’s team. She says she will always remember the Kryeziu family’s first visit to the club and the excitement of the young footballer.

“I remember the first day Edona was brought in by her parents, when the girls’ team at Prishtina was reactivated,” Fazlija recalls. “I will never be able to forget the excitement when I met her parents and Edona’s request to sign up.”

However, there was the small issue of the 180 kilometer round-trip from Kamenica to Prishtina required to take part in the club’s training sessions and matches. “My dad always used to take me to training, since I was a child and didn’t know the way,” Edona says. 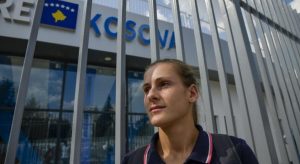 It was these long journeys that made Edona’s mother more reticent about her joining the club. Each time she went to training, Edona needed at least four hours of travel time, which worried her family. The topic even came up in the family’s first meeting with Fazlija.

“‘Can you talk to her and convince Edona that we should wait a little longer? Because the distance from a village in Kamenica to Prishtina is far,’” Fazlija recalls Edona’s mother saying.

“I listened attentively,” Fazlija says about the meeting. “Edona’s mother’s worries were a very real concern for her 12-year-old child: Traveling from a village in Kamenica to Prishtina was very difficult.”

Edona remembers the struggles of these early days well. “I found it very difficult to get started because we were not getting paid, the travel was long and it was difficult to communicate with my family, who were worried about whether I arrived safely,” she recalls. “Sometimes we had a late game and I had to stay with a friend of mine overnight. Sometimes I was short on money and I didn’t even go to training.”

While Kryeziu always had her mind set on a career as a football player, she heard other voices telling her not to pursue the sport.

Women’s football has a short history in Kosovo. The Women’s Football League only began in 2010 but now consists of 12 teams, with KFF Mitrovica, where Kryeziu now plays, currently joint top of the table having won all six of their opening matches, scoring 71 goals in the process.

This year, after beating teams from Bulgaria, Romania and Montenegro, Mitrovica made it to the knockout stages of the UEFA Women’s Champions League, where they played former champions Wolfsburg from Germany.

The Kosovo women’s team meanwhile did not play FIFA recognized matches until 2017, but now the team are competing in Group A for qualification to Euro 2021, the 13th edition of the UEFA Women’s Championship. The team currently sit in fourth place in the group with six points, having won two matches and lost one.

However, neither the rapid advancement of the sport in recent years nor the success of the sides she represents has stopped the prejudices Edona faces.

“There has been a lot of prejudice: ‘you girls are not for football’, ‘football is only for men,” she says. “I had questions like ‘What does she play?’ When I answered that I was playing football people’s reaction was ‘with your feet or your hands?’ They weren’t informed enough about women’s football. It was a very difficult situation for me.”

Kryeziu has been a part of the Kosovo team from its very beginnings and captained the side during their qualification campaign for the 2019 FIFA Women’s World Cup and the 2018 Turkish Women’s World Cup.

“From the first call-up from coach Fazlija, I didn’t miss a single match,” Edona says. “I earned the trust of the coach and staff, as a player, as a person and as a character. They decided to make me captain, and being trusted to be a national team’s leader is a great feeling.”

From her early days with the girls’ club in Prishtina, Kryeziu had played football almost non-stop for over a decade, seemingly immune to injury and fatigue, but her luck ran out earlier this year.

At the end of the 2018/19 league season, in a game against Feronikeli from Drenas, Mitrovica’s closest rivals for the title, Kryeziu suffered a serious injury. “I had the ball in my possession and then went into a tackle,” she says. “When I saw my knee had split in half, I was terrified.”

Edona underwent surgery the next day, and was unable to get back on the pitch to play the sport she loves for months. It could not have come at a worse time for Kryeziu, with both Mitrovica and Kosovo playing historic matches throughout the second half of 2019. 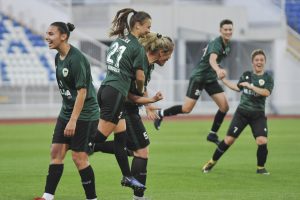 She describes missing out on the Champions League matches with Mitrovica as very hard, but is still delighted for the team. “Of course I was active throughout the [Kosovo Women’s League] championship we won in order to play in the Champions League, and then in the end I was unable to play because of injury,” she says. “But what matters is that the club were the champions, and have passed through the group making history for Kosovo.”

But when asked about her absence from the Kosovo team during the start of their campaign to qualify for Euro 2021, Kryeziu has to fight back the tears. “It is very difficult not being present, because since my first call-up I was always there. It’s hard to accept, but injuries are part of the sport,” she says, adding that she hopes to return soon to help motivate the girls.

Help with financing for Edona’s knee surgery was provided by both the Kosovo Football Federation as well as her club. She is grateful to both head coach Aferdita Fazlija and the club president at Mitrovica, Hajrullah Haxhiu, for their help, and credits the pair for keeping her focused on her recovery.

“These two are the main reasons why I am motivated to return as soon as possible for both the national team and [Mitrovica], because I have received a lot of support from them,” she says.

The praise is mutual between Kryeziu and Fazlija, who describes Edona as the embodiment of women’s football in Kosovo, from the beginning until today. “Edona Kryeziu is the model, she is the best, she is the challenge,” the head coach says.

Fazlija believes that Kryeziu has become an icon for Kosovar women’s football, and that her journey through difficult circumstances is both a reflection of the determined progress women’s football has made in the country, and an inspiration for the future.

“Traveling from Kamenica to Prishtina was very arduous, because she had to change buses three times to reach Prishtina and again on the way back to Kamenica,” she says. “But when I talk about Edona today, she can undoubtedly be considered as a Kosovo women’s football icon. The enthusiasm and desire she had as a 12-year-old to be part of a football club gives me the belief that all girls who have the confidence, courage and desire to be part of a certain profession, in this case football, can achieve their goals.”

Another €32 million from Kosovo to Bechtel-Enka

Salaries in the private sector experience a minimal increase