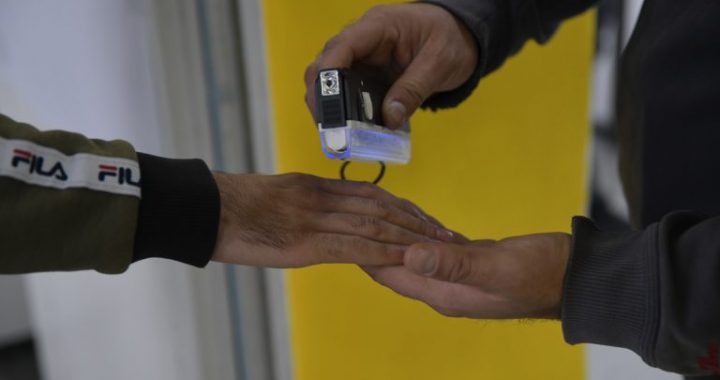 A voter being screened in a polling station during the parliamentary elections in October 2019. Photo: Atdhe Mulla.

An EU observer mission reported that despite some shortcomings, Kosovo’s parliamentary election was largely competitive, but said that some candidates and voters in Serb-majority areas were subjected to intimidation.

The European Union Observation Mission said on Tuesday that Kosovo’s election campaign was vibrant and competitive, allowing contestants to campaign freely across most of the country, but cautioned that the process was marred by an “uneven playing field’” and intimidation in Serb-majority areas.

The observation mission’s chief, European Parliament Minister Viola von Cramon-Taubadel, also cautioned that Kosovo needed to do more to raise its standards to an international level.

“Recurring systemic problems with the election process identified also by previous observation missions such as provisions for calling early elections in a short timeframe, an unregulated pre-campaign period and others need to be addressed in order to bring the election process in Kosovo fully in line with international standards for democratic elections,” von Cramon-Taubadel said.

The EU observation mission reported that in Serb-dominated areas, parties seeking to compete with Belgrade-backed Srpska Lista “were unable to mount effective campaigns due in part to intimidation of candidates, their families and voters in general”.

“Srpska Lista-controlled municipalities, as well as the government of Serbia, directed Kosovo Serbs to vote only for Srpska Lista, while their opponents were denounced as anti-Serbian. This limited the exercise of fundamental democratic rights of freedom of speech, assembly and representation and consequently, the electoral process for Kosovo Serbs fell short of these international standards,” the mission’s preliminary report said.

Immediately after the EU observers launched their preliminary findings, the EU’s foreign policy chief Federica Mogherini and enlargement commissioner Johannes Hahn issued a statement saying that the elections in Kosovo were “peaceful and orderly.”

They called for a new government to be formed “as soon as the relevant procedures are completed” and asked leaders to swiftly resume work on the implementation of Kosovo’s Stabilization and Association Agreement with the EU and on the EU-facilitated dialogue with Belgrade.

“We expect all political actors to remain committed to these processes, which are key for Kosovo’s future, for progress on its European path, and most importantly for the benefit of the people of Kosovo and of the whole region,” Mogherini and Hahn’s joint statement said.

With all the votes apart from postal ballots counted on Tuesday afternoon, Vetevendosje was in the lead after polling 202,968 votes, or 25.48 per cent of the votes cast.

Vetevendosje was just ahead of the Democratic League of Kosovo, LDK, which polled 197,702 votes, or 24.82 per cent of the votes cast.

Kadri Veseli’s former ruling Democratic Party of Kosovo, PDK, was in third place, winning only 169,211 votes, or 21.24 per cent of the votes cast.

Outgoing Prime Minister Ramush Haradinaj’s coalition between his Alliance for the Future of Kosovo, AAK and the party of Prishtina Mayor Shpend Ahmeti, the Social Democratic Party, PSD, came in fourth with 92,149 votes, or 11.57 per cent of the votes cast.

The coalition formed between two outgoing deputy prime ministers, Fatmir Limaj and his NISMA party and Behgjet Pacolli of the New Kosovo Alliance, AKR, polled below the threshold of five per cent of votes cast, at 4.96 per cent. It risks being excluded from the new parliament.

With a narrow gap between the two leading parties and the NISMA-AKR coalition’s hopes of passing the threshold, the focus is now on the uncounted postal ballots coming mainly from Kosovo’s diaspora.

On Tuesday, however, LDK submitted a request to the Elections Complaints and Appeals Panel, an independent body, for a recount of all ballots.

Florian Dushi from LDK told BIRN that his party has evidences that mistakes have been made.

“This means that the result presented on the tables could be incorrect,” Dushi said.

If accepted, the recount could delay the announcement of the final results.