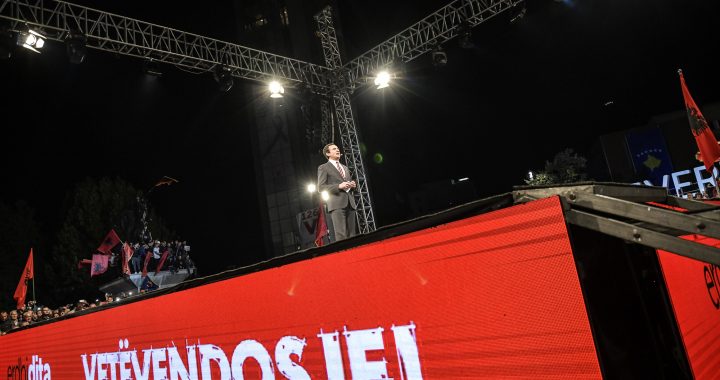 Preliminary results from the Kosovo Election Commission put Vetevendosje and LDK as the two most voted parties in Sunday’s parliamentary elections, as the previous government is punished by the electorate.

With 93 per cent of votes counted, preliminary results published by the Kosovo Election Commission, CEC, show Vetevendosje as having won the largest share of the vote in Sunday’s parliamentary elections, with their roughly 200,000 votes accounting for 25.9 per cent of the more than 850,000 ballots cast. While the result would not be enough for Vetevendosje to govern alone, a first place finish would allow the party the first chance to attempt to form Kosovo’s next government.

Vetevendosje’s leader and candidate for Prime Minister Albin Kurti promised that the government would be created as soon as possible, and described the result as “the people’s revenge against a captured state.”

Kurti added that the party would only consider a coalition government with the Democratic League of Kosovo, LDK, who finished fractionally behind Vetevendosje in the preliminary results on 24.9 per cent of the vote. With less than 10,000 votes separating the parties, postal votes set to be counted on Monday may make a decisive impact on which party finishes first.

LDK’s candidate for prime minister Vjosa Osmani told a press conference that the party would wait for the final vote to be counted before discussing coalitions, although ruled out working with the Democratic Party of Kosovo, PDK. Osmani insisted that it was impossible to talk about a winner at this stage, with many postal votes from the diaspora, 35,000 of whom were registered to vote in this election, still to be counted. CEC will release final results later in the week

While the two opposition parties from the previous mandate are engaged in a tense race to finish with the largest vote share and look set to form a future coalition, it was a bad night for the parties that made up the previous coalition government: PDK, NISMA, the Alliance for the Future of Kosovo, AAK, and the New Kosovo Alliance, AKR.

PDK, who have been the largest party in each of Kosovo’s last four governments, were beaten back into third place with 21.3 per cent, their lowest ever share of the vote when running alone. With three quarters of the vote counted, the party’s candidate for prime minister, Kadri Veseli conceded defeat on Sunday night, stating that PDK had not won the election and the party would respect the vote of the people and spend the next mandate in opposition.

The pre-election ‘100 %’ coalition between outgoing Prime Minister Ramush Haradinaj’s AAK and the Social Democratic Party, PSD look set to finish fourth, with the preliminary results putting them on 11.6 per cent of the vote. In a statement on Facebook, Haradinaj thanked his voters and hailed the election process, describing a “fair and calm competition that raised Kosovo and its citizens to a new standard of political and democratic maturity, serving as an exemplary model in the region.”

While AAK and PSD are guaranteed representation in the Kosovo Assembly, things are less certain for AKR and NISMA. The coalition between the two parties and the Justice Party hovered around the five per cent threshold required for representation as votes were being counted, with postal votes again potentially making a decisive change.

Amongst Kosovo Serb parties, Belgrade-backed Lista Srpska look set for a decisive victory, with preliminary results showing the party winning over 45,000 votes, while none of their rivals look set to receive more than 2,000.