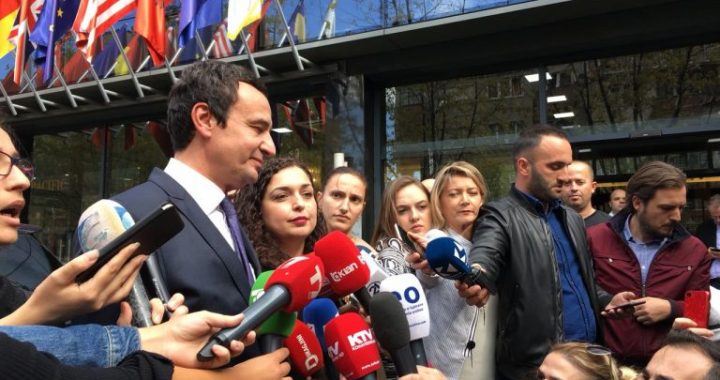 Vetevendosje and LDK expected to close a deal to form government

Vetevendosje and the Democratic League of Kosovo, LDK, are close to reaching a deal to form a governing coalition for the next four years, after the two former opposition parties won the majority of votes in the October 6 parliamentary elections.

“Kosovo has lost a lot of time and the expectations of citizens are high,” said Kurti after the meeting. “We started these talks with the idea to form a more efficient government and a stronger state. We agreed to include 30 per cent women [in the executive] to ensure gender representation. We will have less ministries and deputy ministers, but we will have much more commitment and work to do.”

Vetevendosje and LDK both promised during the electoral campaign to reduce the size of the executive body from 21 ministries, as the former government had, to 12. In addition, both parties promised to cut the number of deputy ministers down to two per ministry.

“We congratulated each other for everything, because we agreed to govern together,” said Kurti.

LDK’s Osmani, on the other hand, said that they agreed on the basic principles, and not the details.

“We just had our first meeting to discuss the potential of governing together. We as LDK have said that we are waiting for the final results. Whoever wins will take the post of prime minister,” said Osmani.

More than 30,000 postal votes from Kosovo’s diaspora will be counted in the upcoming days, which is not expected to drastically change the result.

LDK’s leader Isa Mustafa has also said that in the upcoming days they will continue to work towards reaching an agreement. However, Mustafa stated that the final call will have to be made by LDK’s decision making bodies.

Vetevendosje leads narrowly in front of LDK with more than 25 per cent of the overall vote, and LDK following with 24 percent.

The Democratic Party of Kosovo, PDK, came third for the first time since the party was established in 2000, with 21 per cent of the vote. PDK’s leader Kadri Veseli accepted the defeat on Sunday night, stating that his party will join the parliamentary opposition.

Former Prime Minister Ramush Haradinaj’s party, the Alliance for the Future of Kosovo, AAK, in coalition with Social Democratic Party, PSD, managed to collect only 11 per cent of the vote.

The October elections were primarily triggered by the resignation of Prime Minister Ramush Haradinaj on July 19. The decision to hold early elections was announced on August 22 by Kosovo President Hashim Thaci after a motion of no confidence was passed in the Kosovo Assembly.