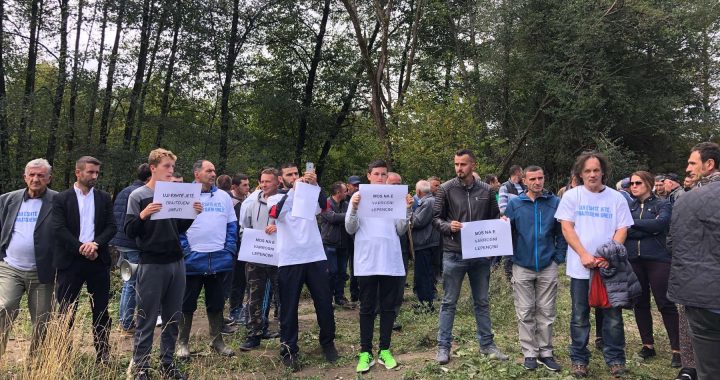 Residents of Biti, near Strpce, continued their protest against the construction of a mini hydropower plant close to their village, just three days after Police turned violent against protesters.

With banners reading ‘Water is Life’, and ‘Water is Kosovo’s Treasure’, residents of Lower Biti protested again on Friday against the mini hydropower plant planned to be built on the Lepenc river close to their village.

In solidarity with the protesters, two Vetevendosje candidates for MP, Hajrulla Ceku and Yll Rugova, joined the demonstration. Addressing the crowds, Ceku said: “It’s over when private interests are put above the public interest, and all those who damage nature will answer to the law. Damaging nature is a criminal act.”

Rugova meanwhile focussed on the power of the demonstrations. “Initiatives like this means that we will not allow pipes to be installed in these waters,” he told local residents. “We will not allow nature, and all that’s essential for our life, to be destroyed.”

According to residents, if pipes are installed in the Lepenc river, local agriculture will be damaged, as more than 100 hectares, including fields of wheat and raspberries, will be left without water.

In January, the Municipality of Strpce decided to halt the construction of the hydropower plant following large protests against plans to excavate the land. The protests began following damage caused during excavation work to a water reservoir in the municipality that supplies water to around 2,500 citizens.

In September, former Minister of Environment and Spatial Planning, Fatmir Matoshi, lifted a moratorium that was placed on the construction of all hydropower plants in Kosovo that was put in place in April 2018 by his predecessor, Albena Reshitaj, following a series of protests against hydropower plants across the country. This ban was to remain in place until a detailed study of Kosovo’s water levels was carried out, but the study has never been completed.

The Municipality of Strpce has not provided an explanation as to why the construction of hydropower plants has continued. In 2016, the Assembly of the Municipality of Strpce, with no specific time frame, suspended all building activities related to the construction of small hydropower plants. It is not clear whether this suspension has been lifted.