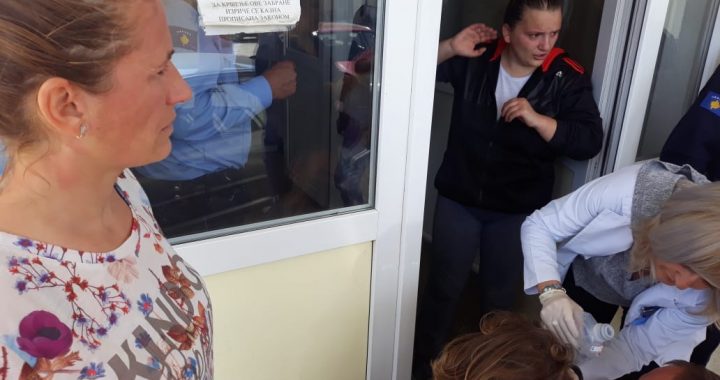 20 injured as police use pepper spray against protesters

Almost a year of protests against the construction of hydropower plants in Strpce ended in violence on Tuesday as Kosovo as police use pepper spray against demonstrators, including children, who pushed past police tape to protect the Lepenc River.

Around 20 residents of the village of Lower Biti near the southern town of Strpce have been injured during protests organized against the resumed construction of a hydropower plant on the Lepenc River on Tuesday, with a special unit of the Kosovo Police using pepper spray in an attempt to disperse the protesters.

A resident of Lower Biti, Jeton Tahiri, said that three people were arrested, and that the police used teargas against children who were also present in the crowd.

“Immediately after we arrived, special units of the Kosovo Police came and pulled police tape across the zone where channels for installing the pipes were being dug,” explained Tahiri.

In January, the Municipality of Strpce decided to halt the construction of the hydropower plant following large protests against the plans to excavate. The protests began following damage during excavation work to a water reservoir in the municipality that supplies water to around 2,500 citizens.

In September, former Minister of Environment and Spatial Planning, Fatmir Matoshi, lifted a moratorium that was placed on the construction of all hydropower plants in Kosovo that was put in place in April 2018 by his predecessor, Albena Reshitaj, following a series of protests across the country demanding a halt to construction. This ban was to remain in place until a detailed study of Kosovo’s water levels was carried out, which was never completed.

The Municipality of Strpce has not provided an explanation as to why the construction of hydropower plants has continued. In 2016, the Assembly of the Municipality of Strpce, with no specific time frame, suspended all building activities related to the construction of small hydropower plants. It is not clear whether this suspension has been lifted.

Mehmetali Hajdini, a police officer from the Municipality of Ferizaj, confirmed for BIRN on Tuesday that the arrests in Strpce took place.

“Protesters tried to pass the police tape using force,” said Hajdini, confirming that pepper spray has been used to disperse the crowd. Hajdini added that all three of the individuals who had been arrested were released after being interviewed.

According to Tahiri, children have played a big role in the protests against the construction of hydropower plants on the Lepenc River.

“Children came from school and joined the protest. The kids tried to stop the police, who told us that no one is allowed past the police tape, but the children who have been fighting for the river for the last five years know that they have to protect the river, so they went past the tape,” Tahiri said. “One of the children fell down, and I personally had to try and catch them.”

Tahiri continued, saying that the police response to the children ducking under the tape was immediate.

“It seems that there was an order from the police commander of the unit to attack us immediately after we reached the police tape. Among the people who were sprayed was my six-year-old niece,” Tahiri added.

The Matkos Group, a company based in Prishtina, is in charge of the hydropower plant construction, and has planned five different mini hydropower projects in the Municipality of Strpce, according to the website of the Energy Regulatory Office in Kosovo.

On July 1, residents of the village of Lower Biti protested the construction of the plants again. Demonstrators claimed that their lands cannot remain fertile if the plant’s construction continues, and the tourism that many of the residents depend on will be damaged if the plans are implemented.

According to Hamdi Rushiti, a representative of the village of Biti, “If the water from the Lepenc river disappears, the degradation of our land will be irreparable and the loss will be catastrophic for these villages. Without water this land is dead, and there will be no agriculture, no tourism and, to put it shortly, it will die.”