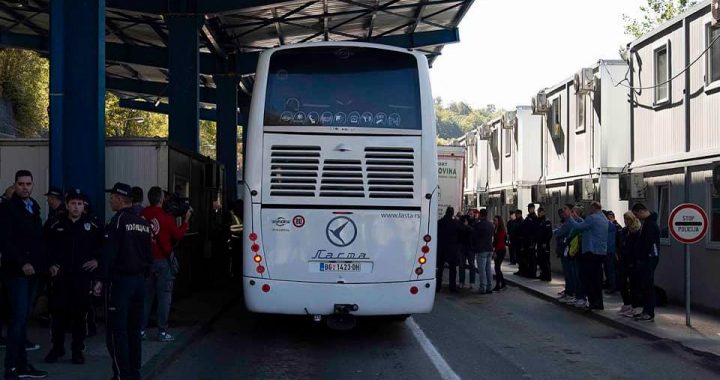 Kosovo Police stopped the Red Star Belgrade football team from entering the country on Wednesday, saying it had no permission to play a match with a local team, Trepca, in northern Kosovo.

Kosovo authorities on Wednesday banned a football match from taking place in northern Kosovo between Serbian club Red Star and a local team, Trepca, which it does not recognize, after calling the match a “serious provocation.”

“We will not allow it [the match] because in that case all sporting principles, respective statutes and the state’s territorial integrity would be violated,” the Secretary General of the Kosovo Football Federation, FFK, Eroll Salihu, told BIRN.

Serbian media reported that the Serbian players had already arrived on the Serbia-Kosovo border crossing at Jarinje, but were not allowed to enter Kosovo due to a strong Kosovo Police presence.

The head of the Serbian government Office for Kosovo, Marko Djuric, said Kosovo had no right to ban players from entering what he called Serbia’s southern province.

“By trying to install an iron curtain between central Serbia and our southern province, Prishtina is choosing the road of self-isolation,” he said, calling also for Kosovo to be ejected from FIFA and UEFA.

Serbian news agency Tanjug said the head of the main Serbian party in Kosovo, Goran Rakic, and the Assistant Director of the Serbian Office for Kosovo, Petar Petkovic, were waiting at Jarinje to welcome the Red Star team.

Ahead of the decision by the Kosovo authorities to ban the match, the FFK condemned plans by its Serbian counterpart to organize a competitive match without its permission. The FFK says it has never registered Trepca as a team.

“We also call on Kosovo’s institutions and law enforcement organizations to address this issue with urgency and take necessary measures in order to protect the FFK’s integrity,” it said.

The FFK on September 17 asked FIFA and UEFA to “urgently react” to the plan and “not allow” such violations of its statutes.

However, on September 29, when FIFA replied to FFK, it encouraged FFK to allow the match to go ahead, while noting that its advice is not mandatory, Kossev news website reported.

The FFK considers itself as the sole authority to organize competitive matches in Kosovo, and says it has not given permission for the match – while keeping the door open to Kosovo Serb sporting clubs to accept its authority.

“We are open to include under our umbrella all football clubs which operate in Kosovo… no matter their ethnic background. So we call on [Kosovo] Serbian clubs to accept reality as soon as possible and play within FFK-organized regular competitions,” the FFK said.

Sport often gets caught up in political disputes between Serbia and Kosovo.

In May 2018, the KFF rejected a request by Red Star Belgrade to play a humanitarian match in Gracanica, saying visiting fans had abused the country’s hospitality.

In March, Belgrade canceled a planned match between the women’s junior handball teams from Serbia and Kosovo amid rising tensions and fears of clashes between Serbian fans and police.