The good, the bad and the unconstitutional: Transgender rights before the courts

After being bounced around different courts and administrative offices in Kosovo, the long-awaited lawsuit filed by Blert Morina to change the name and gender marker on his ID to reflect his gender identity began on Wednesday.

On Wednesday morning, the first hearing in the case of Blert Morina, a transgender man attempting to change the name and gender marker on his official identification documents, was held at the Basic Court in Prishtina, following an 18-month legal battle with the various Kosovo judicial and administrative institutions that have so far rejected his request.

The case has had its ups and downs. Morina filed two lawsuits, one with the Basic Court and one with the Constitutional Court, after the Civil Registration Office refused to approve the request to change the gender marker to ‘M’ and his name to Blert.

In September, after one year, one month and six days, the Constitutional Court dismissed the lawsuit filed by Morina, rejecting his request for the Court to provide a constitutional review of the process for transgender persons to change their names and gender marker.

The Constitutional Court published their decision last week, stating that Morina’s request was inadmissible, passing it back to the Basic Court of Prishtina to deal with despite Morina’s claims that the Basic Court’s backlog of more than 5,000 cases would result in an unreasonable delay in the process. According to Morina, this would potentially add another three to four years onto the time it takes to resolve his case, violating his right to have the case resolved in a reasonable amount of time.

The Constitutional Court disagreed, stating that Morina’s lawsuit before the Constitutional Court was “premature” and that Kosovo’s legal system is capable of providing an effective legal remedy to Morina despite the excessive backlog of cases, which the Basic Court addresses on a “first come first serve” basis. 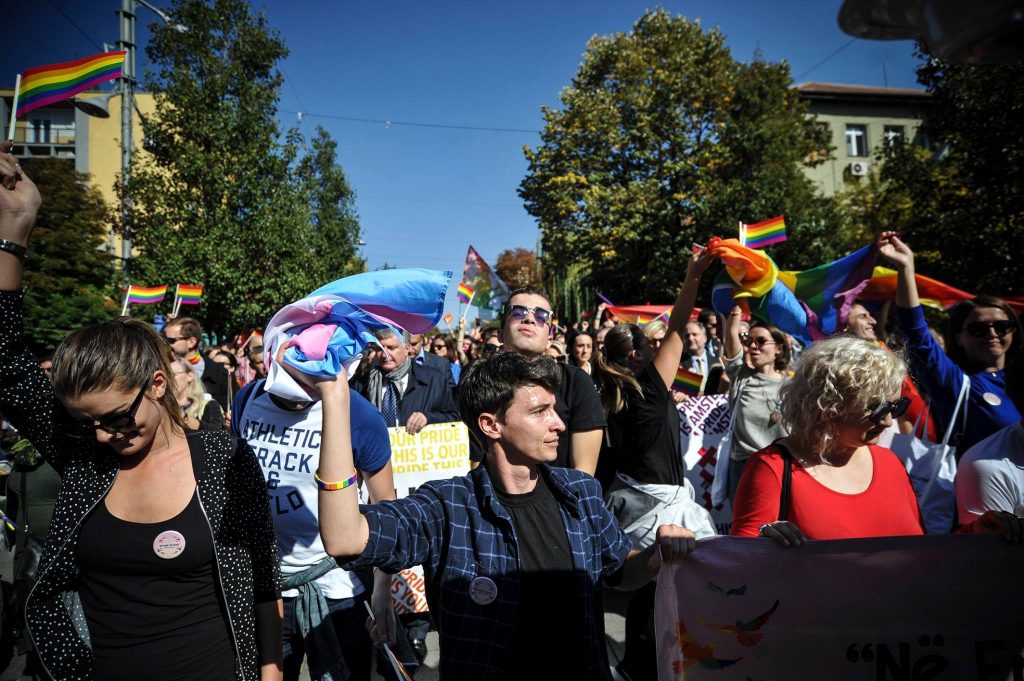 Morina (C) at Kosovo’s second Pride Walk in 2018. Photo: The Center for Equality and Liberty Kosovo.

“If the Constitutional Court had accepted Blert’s case, it would have clarified the legal interpretation that would apply to every other case of a person trying to change their name or gender marker. But now, the decision will only apply to Blert’s case,” she said.

According to Kika, it is possible that the Basic Court will simply send Morina’s case back to the Civil Registration Agency that initially rejected his request in April 2018, but that this could have seriously negative consequences. “There is a likelihood that an identical decision would be issued by the Civil Registration Agency if the Basic Court decides in our favor and sends the case back to the Agency for reassessment,” she said.

Morina and his team will try to insist that the Basic Court address the gender discrimination and human rights violations that Morina has been subjected to, but worries remain that the Court will skirt its obligations and pass the case once again to the authorities that rejected his request in the first place.

Morina’s problems began in April 2018 when the Civil Registration Agency rejected his first request, stating that Morina’s justifications for changing his name “did not stand:” retaining the name currently on his ID would have “no effect on his integration into society,” the decision said, and Morina provided no evidence at all that would prove otherwise.

The Civil Registry said that a person’s gender is “a natural fact, which must be regulated by a medical report” before any changes to elements of a person’s civil status can be made. However, the European Court of Human Rights has previously ruled that requiring transgender people to provide any kind of proof of medical intervention before amending identification documents is a human rights violation.

Kika explained that they contested the Civil Registry’s decision because it also contravenes Kosovo domestic law. “It’s mentioned in the Law on Civil Registration that gender is a fact of nature that can be proven by a medical report, but this ignores both the Law on Gender Equality and the Law on Protection from Discrimination,” she said.

No written procedure exists in Kosovo administrative law that would allow a person to alter the gender marker on ID documents from ‘F’ to ‘M’ or vice versa, Kika explained. “The fact is the law in question here really doesn’t tell you what to do, it’s debatable as there isn’t even actually a procedure for changing gender markers.”

However, a recent judgement from the Court of Appeals could change the game for Morina.

In August, the Court upheld a positive decision from the Basic Court in Prishtina that ordered the Civil Registration Office in Prizren to change the name and gender marker of an applicant known only as ‘Y.’ The Ministry of Internal Affairs appealed this decision, but the Court of Appeals agreed that the Civil Registration Agency had infringed the applicant’s human rights.

“The right to the protection of gender identity is protected through the right to privacy under European Court of Human Rights case law,” the judgement states. “According to them [the ECHR], the concept of a right to private life… encompasses a person’s physical and mental integrity, and can sometimes include aspects of physical and social identity, such as gender identification, name, orientation and sexual life.”

According to Kika, the Court of Appeals opinion mirrors their own concerning Morina’s case.

“I’m happy to see that the Court of Appeals actually referenced basic human rights in the judgement, and they followed the same reasoning that we have been using in our lawsuit,” she said.

“It’s clear that the Court of Appeals really has taken a stand on the interpretation of the law in this case, and was very clear in its response,” she continued. “Regarding changing gender markers, gender identity is a protected category in line with the Strasbourg jurisprudence, and it is part of personal autonomy.” 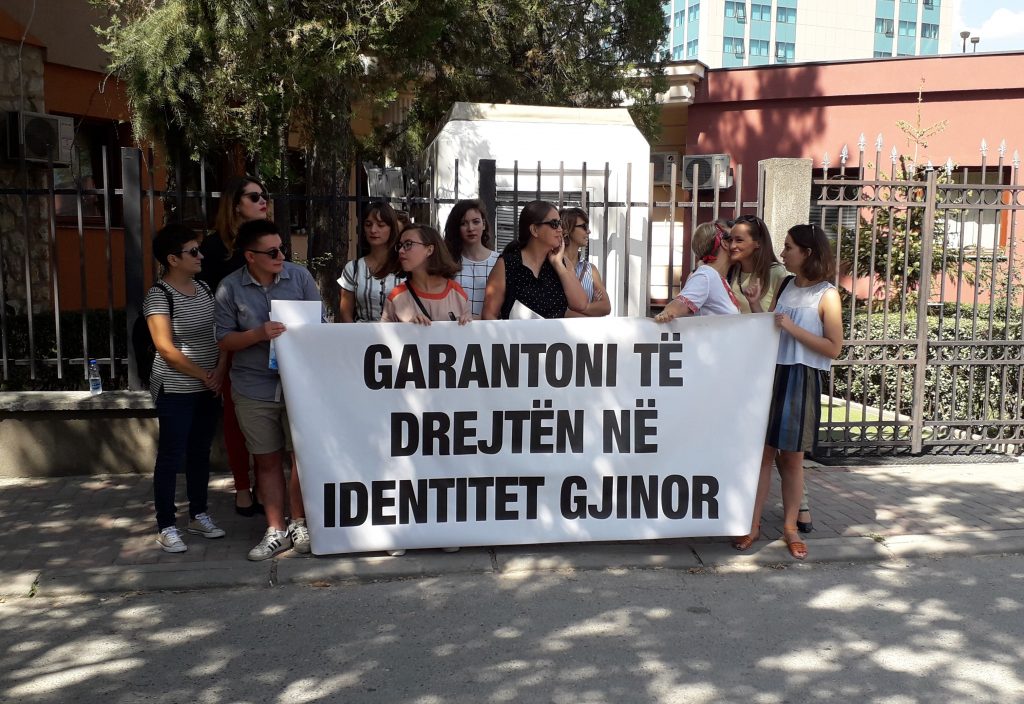 Activists holding up sign reading “Guarantee the right to gender identity” in front of the Constitutional Court in Prishtina in 2018 | Photo: Eve-anne Travers

According to the Constitutional Court’s judgement published in October, this is not the first time that a person in Kosovo has been handed a positive decision on changing name and gender markers.

In April 2012, the Municipality of Suhareka approved the decision of a transgender woman to change her gender marker to ‘F’ as well as her name.

Kika said that the discrepancies revealed in the decisions of Kosovo’s Civil Registration authorities with requests dealing with legal gender recognition must be addressed. This is an opportunity to hold these authorities to account, she said, and ensure that they develop a uniform practice.

“This will be a good lesson for the civil registry, so that they understand the obligations that they have to the citizens of Kosovo to take all applicable laws into consideration and not to take a narrow approach,” said Kika. “Now that this decision of the Court of Appeals has come out, there is no excuse not to.”

Regardless of the outcome of Morina’s case, Kika is positive that it will have an effect on perceptions and acceptance of the transgender community in Kosovo, facilitating public discussion and hopefully ramping up the pressure on judicial institutions to resolve the case as quickly as possible.

“After the case was filed, I was surprised by how many people I met that recognized me and came up asking questions about it. So many more people started to learn about the issue,” she said.

“Transgender people especially are one of the most marginalized communities in Kosovo. I’m proud knowing that their perspective is now a part of public discourse, and this is because of Blert’s case and what we’re trying to do.”

by Maja Zivanovic
Next: Features