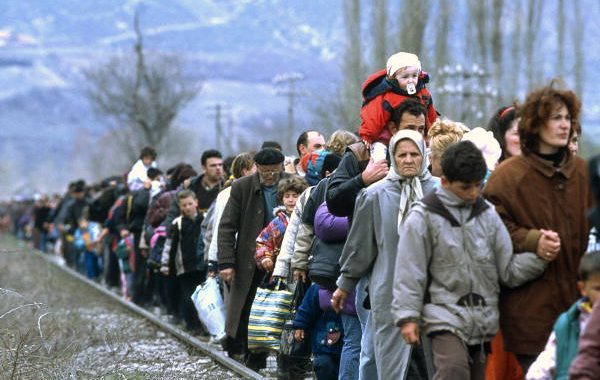 Notions of ethnic cleansing have long plagued Serbia, as demonstrated by the atrocities covered in the three books Albin Kurti presented Aleksandar Vucic with this week and the bloody breakup of Yugoslavia.

“It is impossible to suppress the Arnauts [Albanians in Kosovo] only by gradual colonisation. The only way to do that is the brutal force of organised state power, and in that we have always been above them. Only a country inhabited by its own people can survive.”

These lines were not written by Hitler, or Goebbels or any of that crowd. It is a paragraph from ‘The Expulsion of Arnauts’, a memorandum written by Vaso Cubrilovic in 1937. Cubrilovic was a professor-to-be at the Faculty of Philosophy in Belgrade, and this quote is part of a speech he delivered to the Serbian Cultural Club, led by Slobodan Jovanovic and Dragisa Vasic.

The text is considered one of the fundamental documents of 20th century ‘Greater Serbia’ ideology, which inspired the Serbian authorities during the breakup of Yugoslavia and was used to excuse the ethnic cleansing of Albanians, Muslims and Croats.

Crimes against Albanians were also committed during the Balkan wars by the Kingdom of Serbia and the Kingdom of Montenegro’s military and police forces. About 120,000 Albanians, of both sexes and all ages, were killed.

The government of Milan Stojadinovic, who served as prime minister of Yugoslavia from 1935-1939, could not implement Cubrilovic’s infamous memorandum due to the start of the Second World War and the collapse of the Kingdom of Yugoslavia.

The Communists would bashfully reject Vaso Cubrilovic’s ideas, but Milosevic revived them and embraced whole-heartedly the plan to expel Albanians from Kosovo in 1999, as part of “Operation Horseshoe.” That plan included a brutal campaign of ethnic cleansing en masse, which was conducted by Serb forces in Kosovo throughout the 1998 and 1999 conflict.

According to Cubrilovic, colonists were to be given weapons so as to cause a direct conflict between Montenegrins and Albanians in Kosovo. The Memorandum implied that unrest and fear should be brought to the Albanian people, who must be forced to emigrate either through threats or with money.

The introduction of heavy fines to an already difficult and poor life, deforestation, and forced labour – all of these methods should be considered according to the memorandum, as well as the relentless collection of taxes and confiscation of state and municipal pastures. Cubrilovic also proposed religious persecution: the humiliation of preachers, digging up cemeteries, and banning polygamy. He also advocated the secret burning of Albanian villages and neighbourhoods.

Vaso Cubrilovic, academic, historian, two times a minister, university professor, winner of the “October and Seventh of July” awards, member of the Young Bosnia revolutionary organisation and a participant in Franz Ferdinand’s assassination itself, was one of the final creators in the birth of the Serbian ‘superman.’

This superman would not be Nietzsche’s Ubermensch. It would be abused, fake, Hitler’s – the kind that would bring downfall to Germany, the same way it brought the downfall of Serbia.

When leaving the country, border authorities confiscated personal documents and other evidence of citizenship from the expelled citizens, systematically erasing their identities. Milosevic ordered the removal of all corpses in Kosovo that could be of interest to The Hague tribunal.

The most horrific crime, which a sane human mind cannot accept, was committed in 1998 in Prekaz, in the Drenica region. Large Serbian military-police forces, armed with tanks, self-propelled guns and artillery, surrounded the house of the Jashari family and for three days and three nights in a row, fired indiscriminately at women, children, the elderly and other civilians.

Helicopters and military vehicles pelted the village roofs in bursts, before police forces entered the village, firing on houses. Serbian security forces, with the help of the Serbian army, executed 56 members of Adem Jashari’s family. Among them were 18 women and 10 children. The seed of destruction was planted and a genocide was committed against one family.

After all these monstrous crimes, whose images can be compared with the images of fascist crimes from the Second World War? After all of this, should the Republic of Kosovo recognise the Republic of Serbia?

Every animal and every man in this sad world has the right to defend himself when someone attacks him. The same goes for the people of some country, or should they wait to be killed, up until the very last one of them is dead?

Many Albanians who were supporters of non-violent politics turned to armed resistance after the crimes committed against the Jashari family.

A large number of police officers who took part in actions against Albanians in Kosovo are still considered war heroes in Serbia. Investigations into their crimes are progressing slowly. Many have fled the country and some perpetrators are still in the ranks of the police.

Another story must also be told, a true story, about the senseless crimes of one nation against the other and against its own.

Two masked assailants, dressed in black uniforms with KLA insignia, broke into the Panda cafe in Peja and killed six young men of Serbian nationality with automatic weapons. That was 22 years ago.

Six Albanians arrested in connection to the crime, who say they were constantly tortured for six months, were found not guilty by a Serbian court in 1999.

Since then, no one has ever been brought to justice for the crime, but it has been speculated that the perpetrators could have been Serbian forces or state security operatives attempting to present the KLA as a terrorist organisation to the international public, justifying the actions of Serbian forces in ​​Kosovo.

“I believed in my country, in Serbia, whose warriors are just, and it seems that it created monsters that were able to sacrifice innocent children. They sowed hatred. I don’t know how it is possible for Serbia to give birth to such monsters. What are those brains like?”

These were the shocking words uttered by Milena, the mother of one of the murdered Serb young men in the “Panda” killing.

They also killed Oliver Ivanovic. Viciously. From behind. The way only the biggest cowards kill. And death speaks quietly. All traces of the murderers and responsible parties lead back to Belgrade.

Who knows how many more atrocities were committed by the Serbian army and police, disguised in KLA uniforms? I ask for forgiveness for all the sins of my people committed against the Albanian people. And we will forgive their sins.

Let those Serbs who did not commit crimes come to Kosovo, and wish their neighbours a happy independent life and freedom in their Republic of Kosovo.

Let’s wish for them to become fully-fledged members of the UN, the EU, NATO, UNESCO, Interpol and all other organizations to which the Republic of Kosovo belongs. So that Serbs and Albanians start living a peaceful and safe life together.

After all the suffering they have gone through in their history, as only a few people in the world, Albanian men and women in Kosovo await the beginning of the life their ancestors dreamed of, and the beginning for those who are yet to come and who will never be treated as a people of a lower race.

There is no difference between us, if they appear, they will be to our detriment.

I believe that he would not be angry with me for writing: “Look to the future. Look to the future and there in the Union, Kosovo and Serbia and Albania and all those who were once part of one country, a good country, Yugoslavia, will meet again.”

This article was initially published in Danas, the Serbian political magazine. Prishtina Insight has obtained permission for its republication.

Cedomir Petrovic is an actor and director living and working in Belgrade.