Small Kosovo shakes off the ghosts of the past, one macchiato at a time

Editor’s note: This piece was inspired by recent travelogues on Kosovo, their discourse and misrepresentations of the country’s past and present.

When I landed in Kosovo, a tiny landlocked country in the heart of Eastern Europe, I could hardly tell that it was still shell shocked from the ravages of war. At the Adam Jashari airport, I sipped on one of Kosovo’s delicious macchiatos, allegedly the best in the world (definitely not the worst, in my humble opinion!). As I wandered through the slick, modern airport, I couldn’t believe that this was the site of a NATO intervention in 1998, one that stopped the conflict between ethnic Albanian Muslims and Serb Christians (other ethnicities include Turks, Gorans, and Illyrians). Ten years later, in 2008, Kosovo’s ethnic Albanians declared independence, although NATO, the UN and the EU still maintain a presence here. 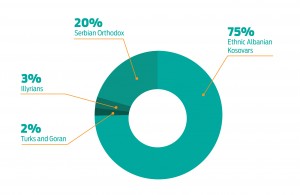 Kosovo’s population is made up of ethnic Albanian Kosovars, Serbian Orthodox, Illyrians and Turks and Goran.

A tip to Americans: you’ll love it here. Not only is Kosovo among the most pro-American countries in Europe, it also is home to numerous streets named after American politicians – including a statue of Bill Clinton in the middle of the capital. Wherever I went, people were chanting “USA, USA, USA!”

In the taxi on the way to Pristina, Kosovo’s young and vibrant capital, I saw booming construction and little businesses flourishing. After settling in at the comfortable downtown Hotel Stars, I met up with Labinot Marmullaku, a London-educated ethnic Albanian working for a think tank in Pristina, and Adelina Xhelili, an independent artist.

We wandered through Pristina’s main corso and made our way over to Memento, a swank cafe bar of the likes found in Berlin or New York. I ask them what it’s like to live in a country that’s newly independent, but still haunted by the past conflict.

“Things are getting better, but slowly,” Labinot says over a glass of fiery raki, the slivovitsa (or brandy) of choice here. “Corruption is obviously a major obstacle, and people don’t believe in institutions,” he says, admitting he himself is an anarchist.

Despite millions of dollars in direct foreign aid, Kosovo remains one of the poorest countries in the region, with unemployment as high as 40%. Kosovo has also become a hotbed of extremism, with hundreds of ethnic Albanian Kosovars having gone to fight for ISIS in Syria and working to make Kosovo more religiously conservative – with the help, of course, of Saudi-funded mosques.

I ask Adelina about the growing wave of radical Islam in Kosovo, and she is adamant that although isolated groups of extremists exist, the country at large remains religiously tolerant.

“We have Muslim, Catholic and Orthodox people in Kosovo, all living together in harmony,” Adelina insists.

Walking through Pristina’s luscious Gradski Park after our drinks, I was struck by the sight of young women in skinny jeans and uncovered heads, strolling alongside women in traditional Albanian hijabs. Adelina and Labinot explain that in this predominantly Muslim country, such contradictions are just a way of life.

We hear the sounds of Pristina’s young people getting ready for a Friday night on our way back to the city. As the sun goes down, the volume goes up for a noisy, free-spirited nightlife, stoked by a generation that grew up with international brands brought by nongovernmental organizations in the early 2000s. As my first day in Pristina comes to a close, a sense of pride, unity, and a celebration of life take flight. This is the promise of Kosovo. 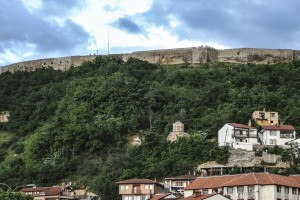 On my second day, I had a hearty breakfast of traditional Balkan sausage and cucumbers, and met up with my driver and guide, Ragip. Like many other ethnic Albanian Kosovars, Ragip worked with various international organizations immediately after the war. He was a driver – “for ambassadors, people with high capacities” – and is also a native of Prizren, the Turkish majority town I’ll be exploring.

The remnants of the Ottoman Empire are alive and well in Prizren, where the town’s sizeable Turkish majority doesn’t need to fear ethnic persecution. The narrow cobblestone streets give Prizren a welcome Oriental flavor after the grim, foreboding Soviet Brutalist architecture of Pristina. Ragip, tall and thoughtful, takes me down a street known as the “Bride’s Street,” named after its endless little shops of bridal and wedding wear. The child mannequins in the stores wore fancy feathered caps and carried swords, and some wore masks. I’d seen this in Pristina, too, and wondered if they were part of preparations for some upcoming national holiday, but later learned that they are mostly for weddings — yet another sign that the deprivations of war are long gone.

After a hike up to Prizren’s medieval Turkish castle, Ragip and I stopped and had lunch in a small establishment by the river known as the rektore, which serves a flaky, fillo dough Turkish delicacy with a choice of meat or cheese fillings.This is scarfed down with a light salty, yogurt known as Aryan. I asked Ragip about how the Turks feel in this new Kosovo, and he said that as an ethnic Albanian Kosovar, the biggest source of ethnic tension in Kosovo is between ethnic Albanian Kosovars and Serbs. I ask him, doesn’t there come a point when looking back at the past does nothing but make one hit a wall? 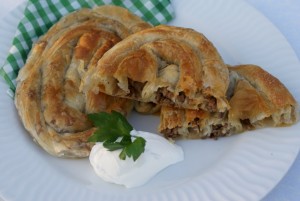 “I lost three family members during the war, and our government continues to negotiate with Belgrade over their bodies,” Ragip says. A bit unnerved and disappointed with Ragip’s simplistic take on things, I drop the subject. Ragip’s mood picked up when we both got engraved knives in Prizren’s “Craftsmen” Quarter, made to order with our names on them.

Once we finally made it back to Pristina, I met up again with Labinot and Adelina for a night of infamous Pristina clubbing. With 60% of the population under the age of thirty, Pristina on a Saturday night is practically electric with excitement.  I walk through almost pitch black streets with Adelina and Labinot, stumbling through rubble on our way to the hot club du jour, Bubbles, with the ominous mountains of Rogava looming like Mordor in the distance. We wait in line in front of Bubbles, while KFOR and UNMIK peacekeepers watch from a distance, ever present, even at peaceful dance parties. When we get in, a grungy, industrial set is humming through the warehouse-like establishment. Over Peje/Pec beer, the beverage of choice for both ethnic Albanian Kosovars and Orthodox Serbs, I ask Adelina, Labinot and a few other locals about how they see the future of their country.

“Honestly, if things don’t get better soon with these corrupt politicians, we either have to go crazy or get out,” says Ylber, a club promoter.

He isn’t exaggerating. In 2015, thousands of ethnic Albanian Kosovars tried to seek asylum in the EU, often risking their lives and spending endless sums of money to be illegally trafficked through Serbia and into Hungary. At the same time, Kosovo’s opposition party held violent riots throughout Kosovo, seeking to oust the democratically elected government. Although the government regained control earlier this year, I couldn’t blame the asylum seekers for fantasizing about the adventure of starting fresh somewhere new (who hasn’t? – although personally I would have chosen Tuscany over Hungary). All around me though, were beautiful young people dancing the night away like anywhere else in western Europe. I realized some forms of happiness are universal, even here.

The next day, after a morning spent nursing my hangover with yet another macchiato, I headed over to the Decani monastery in western Kosovo. My Serbian guide, Milan, explained that this monastery is one of the most holy sites for Serbian Orthodox Kosovar Christians, and when we got there I could see why. As we walk through the gates the noise of the outside world disappears, and bearded monks graciously greet us in passing as we approach the church, just a few minutes after Sunday service. The lush sky blue of the church ceiling is highlighted by intricate, golden Byzantine scenes from the New and Old Testament, lit by quivering prayer candles. I catch a glimpse of a fresco of a stern John the Baptist, and his gaze arrests me. I was later surprised to find out that ethnic Albanian Kosovars never come here, even though it’s a UNESCO protected site. 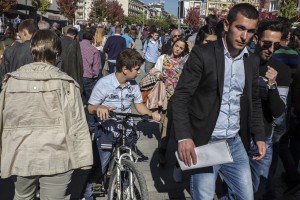 The last stop on my Kosovo journey is the Accursed Mountains, or the Rogava Dinaric Mountain Range. Milan drops me off in the center of Peje/Pec, where I wait for a young ethnic Albanian alpinist named Bakshim Kransiqi to take me up into the range. I wait for Bakshim at a cafe by Peje/Pec’s Bistrica River, and as I observe the shop names I realize that almost all of these shops are ethnic Kosovar Albanian owned. Bakshim is fully decked in hiking gear when he arrives, and surprisingly speaks perfect English – like so many other young people here. We drive deep into the mountain range until we reach a stopping point on a high plain, similar to the Scottish Highlands. First, we treat ourselves to an adrenaline rush on the area’s dramatic zip line. “Is it safe?” I chuckle horrified, as Bakshim encourages me to take the plunge. Afterwards, as I take photos of the natural beauty that surrounds us, I look back down on Peje/Pec and the towns and villages of Kosovo, taking in everything I had seen and tasted over the past three days: mosques, churches, Turkish castles, Illyrians, ethnic strife, rektores, and the stern gaze of John the Baptist. Dazzled by Kosovo’s beauty, I couldn’t help but be pensive about its future.

Editor’s note: this piece parodies original works by other publications, referenced below:

“In addition to the Serbs in the north and Albanians in the south, Kosovo is host to a pizza pie of smaller ethnic groups like Gorans, Illyrians, and Roma scattered in enclaves throughout the entire country.” Morton, Thomas. “Kosovo Gypsies Living in ‘Toxic’ Camps.” CNN, January 12, 2012. Presence of contemporary Illyrians in Kosovo also confirmed by VICE documentary “The Vice Guide to the Balkans Part 4.”

“As the sun goes down, the volume goes up for a noisy, free-spirited nightlife, stoked by a generation that grew up with international brands brought by nongovernmental organizations in the early 2000s.”  Pfeiff, Margo. “Europe’s Youngest Nation, Kosovo is Full of Surprises.” San Francisco Chronicle, September 29, 2016.

“A sense of pride, unity, and a celebration of life take flight. This is the promise of Kosovo.” Campbell, Jordan. “Chasing Mountains and Macchiato in the Balkans.” National Geographic, September 22, 2016.

“The child mannequins in the stores wore fancy feathered caps and carried swords, and some wore masks. I’d seen this in Pristina, too, and wondered if they were part of preparations for some upcoming national holiday, but later learned that they are mostly for weddings — yet another sign that the deprivations of war are long gone.”  Zach, Elizabeth. “The Most Striking Aspect of Europe’s Newest Nation: Its Normalcy.” Washington Post, January 14, 2016.

“...while KFOR and UNMIK peacekeepers watch from a distance, ever present, even at peaceful dance parties.” Kriel, Charles. “Clubbing in Kosovo.” Mixmag, May 27, 2013.