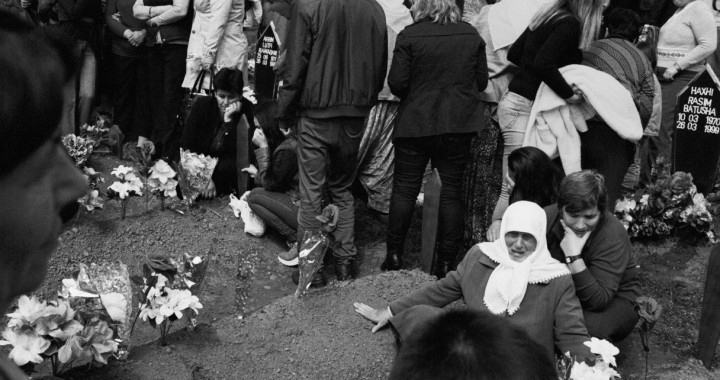 An interview with Dutch artist Willem Poelstra, whose most recent work, on exhibit in Prishtina’s Skanderbeg square, tackles the long-term effects of World War Two and the Kosovo War.

Award winning Dutch photographer Willem Poelstra opened his outdoor exhibition showcasing the aftermath of the Kosovo War in photos taken around the country on Friday October 7.

The exhibition, entitled “For Hanna, Future Stories from the Past…” features haunting portraits in black and white, unlikely interethnic relationships, and war victims.

Poelstra was inspired to come to Kosovo because of his own family history. The first part of the exhibition focuses on the story of his mother Hanna, and his grandmother Lucie, two Jewish women who survived imprisonment in the Nazi concentration camp of Westerbork. It continues with photographs from Kosovo that shed light on the effects of the 1998-99 war. His subjects are people who remain scarred by their collective memories despite having moved forward.

Willem’s father, Albert Poelstra, had a different position during the war. He was an engineer who worked in a German locomotive company built the trains which transported Jews to concentration camps all over Europe.

“Looking back, [this project] is sort of related to my early discussions and debates with my father,” says Poelstra. “The basic story of the idea behind the project is that when my father died, he left me a box with information, because he did not want to talk about his past. After he died, we found a box inscribed ‘for Willem.’ It contained documents about his work in Berlin, Germany during the Second World War. I did some research, and I discovered that the company manufactured 4,000 locomotives during the war. They needed good engineers and they employed my Dutch father because all educated engineers from Germany took part in the war, that’s why my father went there.”

Apart from work documents, the author’s father had left a couple of family tree books that at long last revealed the secret kept by his parents.

“The box I found contained two family tree books. After getting it analyzed, they came out with a list of over 90 persons who were killed during the war from my mother’s family. Among them were four sisters of my grandmother, my mother’s aunts,” he says. “We discussed everything at home with my parents, we were very open. But one thing was never discussed: the family. We discussed the war, of course we did, but not the parts that were related to family, it was always avoided.”

Poelstra considers relationships between the warring communities to be very important to his project. According to him, they specifically relate to the relationship between his mother and father.

“My parents met in 1947, it was always difficult for my grandparents [on my father’s side] to accept. But just imagine, only two years after the war, a guy who worked four and a half years in Berlin for the [Nazi] regime, dating a Jewish girl. I came up with the idea to use the story of my parents, transfer it to the present, and my intuition led me to Kosovo,” he says. “It was very difficult for me to find couples of mixed ethnicity. I managed to find a family [Albanian-Serbian], but we had an agreement not to show them in the Balkans. After I asked them once again, they allowed me to use their picture, without the names, because it is a very important part of my project.”

Poelstra started his work in Kosovo in 2012 and revisited the country multiple times to gather material. Now, on his ninth visit, he has finished his project and is focusing solely on the exhibition.

“I liked doing something that had to do with me. One of the guys I photographed for the exhibition said that ‘you don’t just pick up the guns one day, it grows over time’. It always struck me that people were living in happy families but were of different ethnicities. The war started, and suddenly the families were in conflict, which is very strange.”

According to Poelstra, he chose Kosovo because it was not receiving a large amount of attention at the time he decided to conduct his work.

“I don’t wanna be somewhere where everybody is doing the same job. Many other photographers were going to Srebrenica [Bosnia], I knew I was choosing a subject which nobody was interested in at that moment. Once somebody said that the best thing to do is to create your own news, and not follow the news.”

Poelstra, a former operations manager at a major marine salvage company, says that his four- and-half-year long project was well-received in his home country of the Netherlands, despite his initial difficulty with working on the field.

“The first time I came here in 2012, I stayed three weeks in the north [of Kosovo]. The reason I went there first is because I wanted to start in a place where it would be more difficult to find subjects,” he says. “I was in doubt whether there was enough here to go on. I remember sitting all day in my hotel room and going out and not finding the right material,” he says. “But then I stumbled into a protest by Vetevendosje where people clashed with the riot police, and that’s when I thought ‘this is what I need’.”

Poelstra stresses that he worked in Kosovo as a whole and did not try to pick and choose his subjects based on identity. Through his work, he aims aims to start a healthy discussion between the people that goes beyond the constraints of politics.

“I never tried to balance [represent all subject groups equally] because there is no such thing as balance in this case. I know what happened in the past, but it is not on me to put my opinion there,” he says. “In the end, all of the stories are personal stories. For instance, one of my subjects who lost a son after a shootout at a bar, said that it doesn’t matter who the person is, losing a son is the same for every mother.”

Although he considers it to be one of his largest exhibitions, Poelstra is preparing a book that will contain more pictures he took during his time in Kosovo that did not make it to the showcase itself.

“You can do more in a book because you can include more information and text. I did not include some pictures because they tend to start the wrong discussion, you are not able to include a lot of context and it will distract from the main idea. There are also pictures that might irritate people, you should not do that. You should let people think, there is no reason to irritate them, he says. “Despite that, of course some people will get irritated because my perspective as a photographer differs from the perspective of a person from here who sees the pictures. They look at it through the lens of their personal background.”

Poelstra plans to show his exhibition in other Balkan cities, like Belgrade and Tirana, but also hopes to open it at the Ibar bridge river which divides northern and southern Mitrovica. He sees bringing his exhibition to Kosovo as a challenge and that photographers who take their work back to the site of their project are rare.

“The main reasons to do this exhibitions here are my friends who have helped me with many things and I am happy to do work with them. The second is that I needed to show this story to people, the project would be meaningless if left to rot in an attic.”

Poelstra’s next undertaking is to start a foundation to provide continuous support for this exhibition, but also accumulate funds for other projects that are in the spirit of his work.

“What you think is always different from what you see. When you look at my exhibition, all the pictures on the outside are in black and white. The inside, however, is colorful, it tells the story. You always see the outside first, and it gives you a different impression of what the inside really is,” he says.

“The fact that the sad stories are hidden makes it more of a challenge; because those things are hidden, they remain unsolved.”

The outdoor exhibition will be open until October 17 and is located right beside the government building in the center of Prishtina. See more of his work on his website.