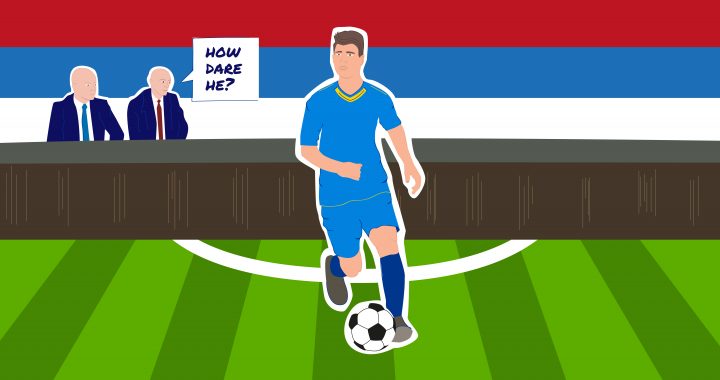 The case of footballer Ilija Ivic, who has seen he and his family persecuted after accepting an invitation to join Kosovo’s under-19 team, is the latest example of Serbia dictating how Kosovo Serbs can and cannot interact with Kosovo’s institutions.

As news broke that Ilija Ivic, a 17-year-old boy from Gracanica, had accepted an invitation from the Kosovo under-19s football team to join the squad, coverage of the story in Serbia was anything but objective.

Pro-government tabloid Informer described Ivic’s decision as “a bomb being set off” and, in an online poll, offered its readers three choices as to how to respond: “Shame on him”, “He betrayed Serbia,” or “He could not have made a worse choice.”

Informer was not alone, as newspapers across Serbia strained themselves to emphasise the level of Ivic’s treachery, while former Serbian national team player Milan Jovanovic described it as a “red line” that should not be crossed.

Comments made on social media followed suit, heaping criticism on a young boy who dared to pursue opportunities to further his dream career through Kosovo’s institutions.

Soon, Serbia’s political machine responded to the furore. Just a day after news broke that Ivic will play for the Kosovo team, his mother lost her job at the Serb-run Prishtina Cultural Education Centre based in Gracanica.

“In an informal conversation about why I lost my job, I was told that it was [her son’s] offer of participation in the national team,” she told Voice of America. “My existence is threatened at every turn, but I will not give up.”

To put it another way, politics once again entered into the daily lives of Kosovo Serbs, and removed those it believes are “not politically suitable.”

The incident is another in a long line of episodes involving representatives from Central Serbia instructing Kosovo Serbs how they can and cannot interact with the Kosovo state. Ivic is hardly unique in pursuing a career through Kosovo institutions, but his decision has seen he and his family persecuted, while others are somehow considered heroes.

There are numerous other examples, including the Kosovo Police, where a number of Serbs are serving. We see them on a daily basis wearing uniforms featuring the Kosovo flag, while many Serbs living in Kosovo also possess a Kosovo ID card, as it eases the completion of basic bureaucratic tasks.

If we describe all of the aforementioned groups as ‘just doing their job’, why is this argument not extended to Ivic? This list of Serbs participating in Kosovo institutions is endless, but few are ever labelled as traitors.

Nobody points the finger at Serbian representatives in the Kosovo Government or parliament accusing them of betrayal, instead they are described as “defenders of Serbian interests in Kosovo.”

In fact, whenever these “defenders of Serbian interests” have disagreed with authorities in Prishtina over political issues, they have often responded by criticising the lack of will to integrate the Serb community into Kosovo institutions. But integration is not only political, and Ilija Ivic’s attempts at integration have now seen him castigated, without any regard for the consequences.

One can only imagine the pressure that would be exerted on Serbs living in the north of Kosovo if they made a similar decision. Would Informer’s “bomb” still be only metaphorical? Would the judgment be even harsher if Ivic was not from central Kosovo?

Speaking at a training session of his club, KF Flamurtari, Ivic responded to the uproar by stating that football is his life and he does not care about anything else. It is an admirable response to the criticism, most of which comes from people with no conception of the life of Kosovo Serbs.

In a world full of hypocrisy, judgment and fake morality, let’s hope Ilija will keep playing the best football he can – no matter where and under which symbols.

Nevena Radosavljevic is a freelance journalist and trainer in peace-building and conflict transformation from Leposavic. She is a Ph.D. candidate at the LMU in Munich and holds an MA degree in Peace and Security from the Institute for Peace Research and Security Policy at the University of Hamburg.