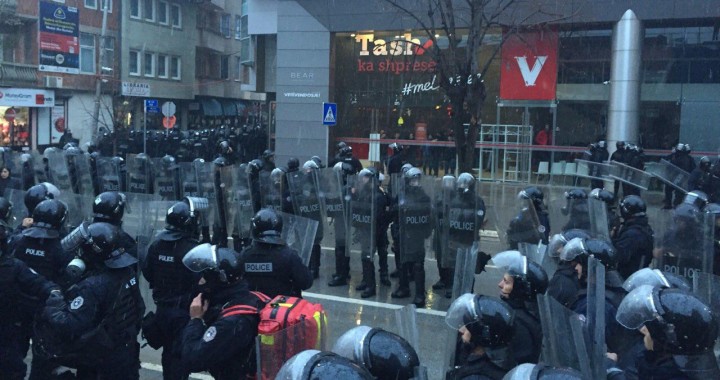 The limits of criminal obedience

If one were to fast forward and quickly observe the behaviour of Kosovo’s political elite in power since 1999 (end of war, or thereabouts) to the present day, there is one thing they cannot be accused of, and that is disobedience. Accusing them of such a grave crime is, the least to say, unfair and unjust. The policy of obedience continues to the present day to constitute their actual ‘being’ in two respects: ‘being’ as in being in power, and ‘being’ as in being free – no matter what.

While one may make a fuss about the nature of the “obey” part and find various obscure historical or moral reasons to justify it, tautological in itself for an emerging democracy, the dangerous problem remains with the “no matter what” part. Anything goes.

One can draw much from discourse used during the recent political standoff in Kosovo. If one follows carefully the discourse that unfolds from the political elite and mainstream pundits, much of the problem lies with the disobedient and “misbehaving” opposition and a few other sane voices that remain. A young and what seems to be in public a promising politician appeared to be stunned with the recent (mis)behaviour of both, those in power, and those in the opposition. In one of her recent interviews she suggested that “we are not listening to what Kosovo’s strategic partners are saying” and that “the damage caused by the misbehaviour is huge.” I pick on these suggestions as they, more or less, represent the readily accepted discourse that one hears in mainstream circles, as well as from international patrons.

It is difficult to start and pin down where the misfortune lies: is it with the actual “misbehaviour,” “disobedience towards the strategic partners,” and the “damage” that is allegedly being caused, or is it with this line of thinking itself? It does not take much to speak of Kosovo politicians’ (dis)obedience. The Constitution of Kosovo is a primary herald of ‘obedience’ and ‘good conduct’ towards the strategic partners. From 1999 to 2016, the way this state has been constituted, from the very first Article of its Constitution, down to the flag, anthem, and all the way to its core, represents a fundamental product of extreme obedience. On the other hand, just thinking (a bit) differently, or disagreeing with (some) outcomes of excessive obedience, one is readily charged with “disobedience” and “misconduct.”

What Kosovo’s political elite, foreign patrons, and the mainstream pundits do not want to admit is that some of the disobedience that has recently appeared within Kosovo institutions is not a calculated choice of some political subjects, but  a necessity produced by circumstances of a harsh policy of uninterrupted obedience. Unfortunately, this is inconvenient for those who see this “disobedience” and “misconduct” as some sort of crazy conspiracy towards a coup d’etat. The emerging disobedience is a necessary, if not a natural, socio-political product of excessive obedience that unfortunately many believe should be continued.

The issue at hand is not exhausted with the simple explanation that disobedience is a consequence of an excess of unconditional obedience. One has to discover why such disobedient behavior is taking place inside institutions in addition to outside. Well, to get an answer I guess we would need to listen to those who are disobeying.  Is there a justification for their disobedience? Why is it happening? Instead of this, in an unprecedented action in Kosovo’s history and its security structures, the government decided to send an elite anti-terrorist unit (far bigger in numbers than the elite Navy SEAL sent by the US to kill bin Laden in Abbottabad) to raid the offices of Vetevendosje, one of the disobedient opposition parties whose members released some tear gas in Kosovo’s Parliament. A great crime to be dealt with by an elite anti-terrorist unit, indeed.

To any student of political science and practicing politician this was a fantastic revelation of the much undisclosed, or so far, difficult to disclose relationship between the obedient and the disobedient parties. One needs to fulfil two simple criteria to be free from police raids. The first is that one needs to be, or suspected of being, a criminal. And the second is that one needs to be obedient. The second necessarily follows the first.

The police never raids the offices of PDK and LDK, because they fulfil both criteria (crime and obedience) easily. The police never raids the offices of AAK and NISMA, because they fulfil the first criteria (crime) and can easily and necessarily follow the second (obedience). The last two, who are now connected to VV, may as well be a victim of police raids soon, but never for crime, only for disobedience – if they continue to be so.

When the police raided the VV offices, they did not do so because of a few individuals inside that may potentially fulfil the first criteria (crime). Quite the contrary, they did exactly what they must – the raided the VV offices to pick up on a few individuals – exactly the ones that fulfil neither the first criteria (crime), nor the second (obedience). This makes it clearer even for the blind ones, that state violence gravitates towards upright and disobedient ones and away from crime and obedient ones. To be sure, same patterns can be witnessed elsewhere in the region, Serbia, Macedonia, Montenegro, etc.

To make matters worse, the obedient parties and individuals in the government were highly praised by Kosovo’s international strategic partners for using unprecedented state violence to shut up those disobeying. Tragic as it may sound, it should hardly be surprising. Those suspected of criminal activities, and charged as such by some of Kosovo’s strategic partners themselves, may be liked and supported by the very same strategic partners. While far from being just, it is in fact a sovereign choice these strategic partners of ours make. What others choose to do should not concern us here. But one’s free choice leads to another’s free choice. Some have freely chosen to simply not obey criminal rule – regardless of who supports them. Obedience should not exonerate criminals and disobedience should not be criminalized. Some may worry about Kosovo’s image. If the society is producing an “ugly” image by disobeying crime and various injustices, sure – let everybody know that some have chosen this “ugly” path.