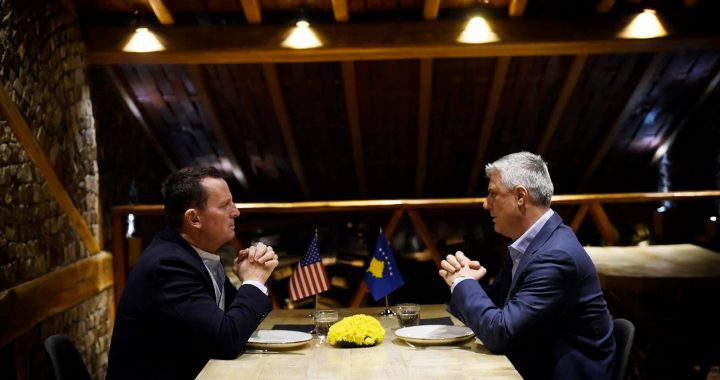 This America is no friend to Kosovo

November’s election in the United States presents a unique opportunity for the Kosovo diaspora to take a stand against the Trump administration's regressive foreign policy in Kosovo spearheaded by the nonsensical approach of special envoy Richard Grenell.

Kosovo and its diaspora have been given countless warning signs that the current US administration is not to be trusted.

We should have taken note of the hounding and deportation of immigrants, the arbitrary detention of families who committed the “crime” of seeking asylum, the Muslim travel ban and the current move to deny financial aid to hundreds of thousands of Americans married to undocumented immigrants following the coronavirus outbreak. These are scenes that should shock our diaspora’s conscience, as a people that fled from the collapse of Albania in 1997 and the Kosovo war in 1999.

I write this to ask my compatriots in the US to not vote for Donald Trump in November – if not out of broader, humanitarian concern, then at least to ensure that the current US pressure on Kosovo’s democracy comes to an end.

The current face of US meddling in Kosovo is Richard Grenell, acting director of national intelligence, US ambassador to Germany, and President Trump’s special envoy for the Kosovo-Serbia dialogue.

US intervention in Kosovo politics is not a recent development, but Grenell’s qualifications should give us pause. He has been described as having “no credentials” for his intelligence role, which he was given when Trump fired former director Joseph Maguire, reportedly for warning the Trump administration that Russia was planning to interfere with the 2020 US election.

Grenell has been an ardent supporter of corrupt politicians like Vladimir Plahotniuc of Moldova and has accepted money from nonprofits funded by Hungarian strongman Victor Orban. When he took on his ambassador role in Germany, he made it clear that he wants to “empower other conservatives throughout Europe.”

It is unclear whether he means conservatives like Orban – who has effectively snuffed out civil society and political dissent in Hungary – or conservatives like Plahotniuc, accused of being involved in the theft of one billion dollars from his own country. Regardless, these sympathies might explain why he is drawn to collaborating with politicians like President Hashim Thaci and LDK leader Isa Mustafa.

Grenell’s demands of Kosovo are well known: remove all tariffs and trade barriers with Serbia, so that the dialogue between Kosovo and Serbia can continue. However, Grenell has failed to articulate how removing trade barriers is in Kosovo’s interest, as a small country that has historically been flooded by products from Serbia, a much larger, antagonistic state.

In fact, it is still not clear why Kosovo must completely open the floodgates to Serbian goods and harm our local producers – even as Serbia denies freedom of movement to goods destined to Kosovo from other countries.

Lifting all trade barriers with Serbia is a bad deal for Kosovo, one even Trump wouldn’t sign if he was in the position to make the call. And yet, under Grenell’s pressure, Prime Minister Albin Kurti agreed to lift tariffs on imports from Serbia and to impose a handful of reciprocal trade measures. But even reciprocity in trade won’t do for Grenell.

Then there’s the mysterious ‘Washington deal’ allegedly involving a land swap agreement between Kosovo and Serbia.

President Hashim Thaci has made references to his support for “border corrections” with Serbia in the past, before changing his mind following a public backlash. As recently as February 2020, the Trump administration was making it clear that they were open to the possibility of a land swap, although one month later Grenell denied that this was the case.

In his address to the Kosovo Assembly on the day of the no-confidence vote against his government, Kurti said Thaci had insisted they go to Washington together to sign a deal. Kurti said he refused this invitation, as he was convinced that the deal involved a US brokered land swap between Kosovo and Serbia.

The existence of such a plan is still being debated. Yet, one has to wonder why it is so urgent that the dialogue between Serbia and Kosovo continues immediately. One theory is that this deal must be pushed through before US elections are held in November 2020, and presented as a victory for Trump and his administration during the campaign.

Although the Kurti government only lasted 51 days, there are clear indications that this may be the most promising government Kosovo has ever had. Cutting the bloated salaries of government staff and reducing the size of government should appeal to both conservatives and progressives.

We had only seen the very beginnings of what this government promised it would do: a system of obligatory national service, raising the minimum wage for private sector workers, setting aside 900,000 euros for domestic violence shelters, and more recently, a plan for managing COVID-19 that has ensured that Kosovo is among the countries with the lowest rates of fatality in the region.

However we may feel about the government, Kurti’s vote of no confidence had nothing to do with his performance. According to LDK MP Kujtim Shala, LDK asked the Trump administration if Kurti could lead the Kosovo-Serbia dialogue if he dropped the tariffs. The answer from Washington, according to Shala, was no.

Even before the motion of no confidence, voices in LDK were calling for greater executive powers to be handed to President Thaci. Minister Agim Veliu insisted that cases of COVID-19 in Kosovo were growing “by the hour” and that a state of emergency must be declared, before being sacked by Kurti. LDK is now calling for the relaxation of measures designed to prevent the spread of coronavirus, against the advice of Kosovo’s public health authorities.

Kosovo is now in a situation where the parties that did not win Kosovo’s election are attempting to shoehorn LDK’s Avdullah Hoti in as Prime Minister of Kosovo through a new post-election coalition – seemingly in contradiction with a 2014 decision from the Constitutional Court on precisely this issue. LDK’s Vjosa Osmani, who won the vast majority of the party’s votes in the last election, has been frozen out of her own party for refusing to play along.

The winners in this situation seem clear. Hashim Thaci gets to go to Washington, Isa Mustafa gets his man in the Prime Minister’s seat, and Grenell will get his “historic” deal between Kosovo and Serbia. The biggest losers will be Kosovo citizens.

The diaspora in the US can make their displeasure felt by demanding that Richard Grenell be removed from his post as Kosovo envoy for orchestrating regime change in Kosovo, as the Albanian American Civic League has already done.

Most importantly, the diaspora in the United States can take a stand by not voting for Donald Trump in November 2020 or any municipal or state politicians that support him – even if they are fellow Albanians.

I know this goes against the grain of a deeply held belief among many that Kosovo cannot survive without obedience and gratitude to the US, but no amount of obedience will protect Kosovo if we accept that the US can violate Kosovo’s constitution, change its government and even possibly broker its partition. These are limits that only Kosovars can set.

Hana Marku is a law student at Osgoode Hall Law School in Toronto. She has reported and commented on transitional justice and gender equality for Prishtina Insight, openDemocracy and Kosovo 2.0 as a researcher and journalist.