Every day of the week, people at markets up and down the country are doing what they can to keep poverty at bay, their hopes often reliant on a wheelbarrow.

Hazir Maksutaj, from the village of Gjinoc near Suhareka, is hanging around the city market pushing his empty wheelbarrow. He has not come to the market to sell anything, he is there to offer his wheelbarrow as a potential delivery service for customers who need to transport their goods across the city.

As he circles the market, Maksutaj calls out to the people buying things, hoping that one of them has parked their car far away and will need the use of his wheelbarrow.

Every Tuesday, regardless of the weather, he leaves his home early morning, grabs his wheelbarrow and heads towards the Prizren-Suhareka highway to wait for a bus, but he doesn’t always get picked up. “Once they see me with the wheelbarrow, they rarely stop,” he says. 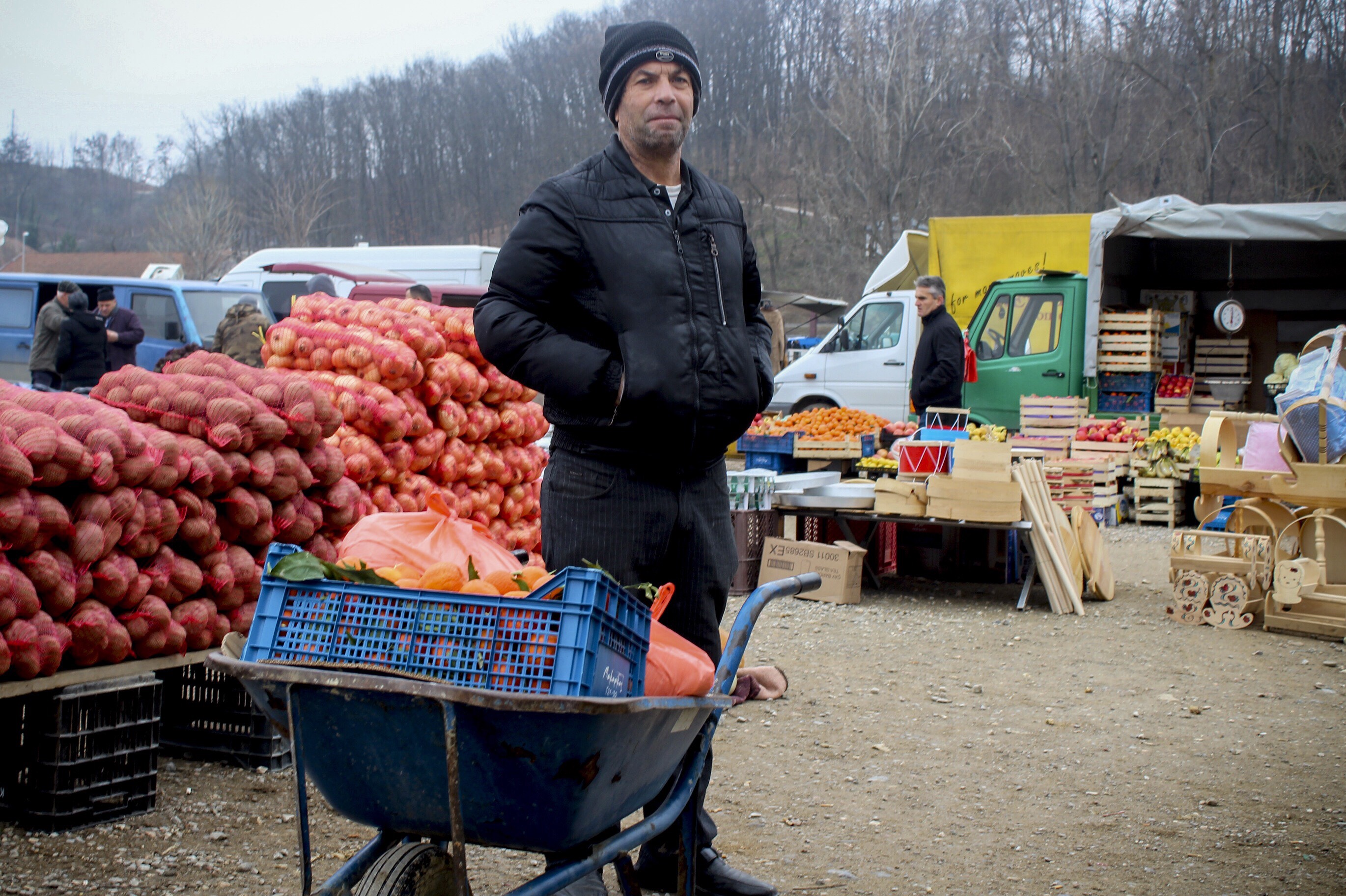 For a single delivery to a customer’s car or house, Maksutaj earns a euro, or sometimes a euro and a half, depending on the distance. A 15 euro profit is considered a lucky day.

Maksutaj is not concerned about overloading the wheelbarrow, it is only covering a long distance that is sometimes a bit tiring – there were occasions when he has traveled over a kilometer transporting other people’s purchases. “I carry fruits, vegetables, stoves, whatever a wheelbarrow can carry,” he says. “People overload it sometimes, but I never tell them not to. It just depends on how far you want to go, then the price goes up.”

Maksutaj says that the needs of his family come before any ideas of job satisfaction. “You have no choice when you are aware that your family depends on you.”

Maksutaj lives with his wife and his son, who recently graduated from high school, but the family’s financial circumstances have prevented him from continuing his education. Maksutaj is interested in finding a job for his son, and put in a request to the Mayor of Suhareka, Bali Muharremaj, who lives in the same village.

Since his work at the market on Tuesdays is not sufficient to provide enough income for the family alone, Maksutaj sometimes goes to Prizren on Wednesdays, which is market day in the city. “I don’t go there often because there are a lot of people working with wheelbarrows, there,” he tells Prishtina Insight. “There are a lot of them in Suhareka, too.”

In addition to transporting goods, in late spring and throughout the summer, Maksutaj sells blackberries. “I collect blackberries during summertime and then sell them in the city,” he says, as a few meters away, a voice beckons: “Hey! … Wheelbarrow man!”

A liter of rakia, a pair of shoes, some bottles of tomato sauce and a few pairs of woolen socks sit in front of Milica Zivkovic at the market in Fushe Kosove. The woolen socks, which she knitted herself, are almost sold out.

Unlike other traders at the market, 72-year-old Zivkovic doesn’t have the strength to call out to potential customers and help sell the few things she has brought with her. On top of her age, she is tired from traveling the three kilometers on foot from Uglar, her village, close to Gracanica. 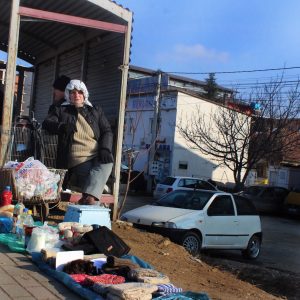 Zivkovic, who lives alone in the Serb-majority village, says she is forced to trade at the market because her pension of 90 euros per month is insufficient to live on. She says that the products she has brought to market are worth less than 30 euros, if she manages to sell them.

Every Tuesday morning she pushes a wheelbarrow carrying her wares for about an hour to reach the market in Fushe Kosove.

“I wake up at five in the morning, drink coffee, feed the chickens and then load this little wheelbarrow and leave home after six o’clock,” she tells Prishtina Insight. “I knit the socks by myself and sell them for a price of three euros. It takes three to five days to knit a pair of socks.”

Part of the reason she comes to Fushe Kosove on foot is to save money, as she rarely earns more than 13 euros on market day, and has medication she needs to pay for.

But in addition to her financial needs, Zivkovic also comes to the market to socialize. She describes life as very monotonous following her husband’s death, and her children living in Gracanica rarely visit. “Living alone is boring. I need to socialize a bit,” she says. “Although I am not completely alone, as I have got some chickens to live with!” she adds, smiling.

Zivkovic, who considers herself still strong enough to work, never misses the market on Tuesday. Her customers are mainly Kosovo Albanians who, according to her, are not bothered about her ethnicity.

However, she rarely manages to sell all her wares, and describes the journey back home as the most arduous part of the day, mostly because of the wheelbarrow loaded with stuff she could not sell.

“I would like to sleep longer in the morning, too, but with only 90 euros, it is hard to live,” Zivkovic says.

Every Thursday morning the small town of Malisheva becomes very busy, as traders and customers flock to the market, attracting people from across the country.

Remzi Rrustemi, from the village of Reznik near Vushtrri, holds a large plate of pumpkin seeds for sale. He has to leave home in the early hours of the morning in order to reach Malisheva in time for market.

47-year-old Rustemi has sold seeds for several years in order to provide for his family of five. He faces problems with his back, which prevents him from doing any other work. “I can’t do construction work because I have problems with my back, so I need to survive by selling seeds,” he tells Prishtina Insight.

Rrustemi sells his seeds for a price of 25 cents per tea cup, which he uses as a unit of measurement. He usually earns around 20 euros on market day, minus his travel expenses. 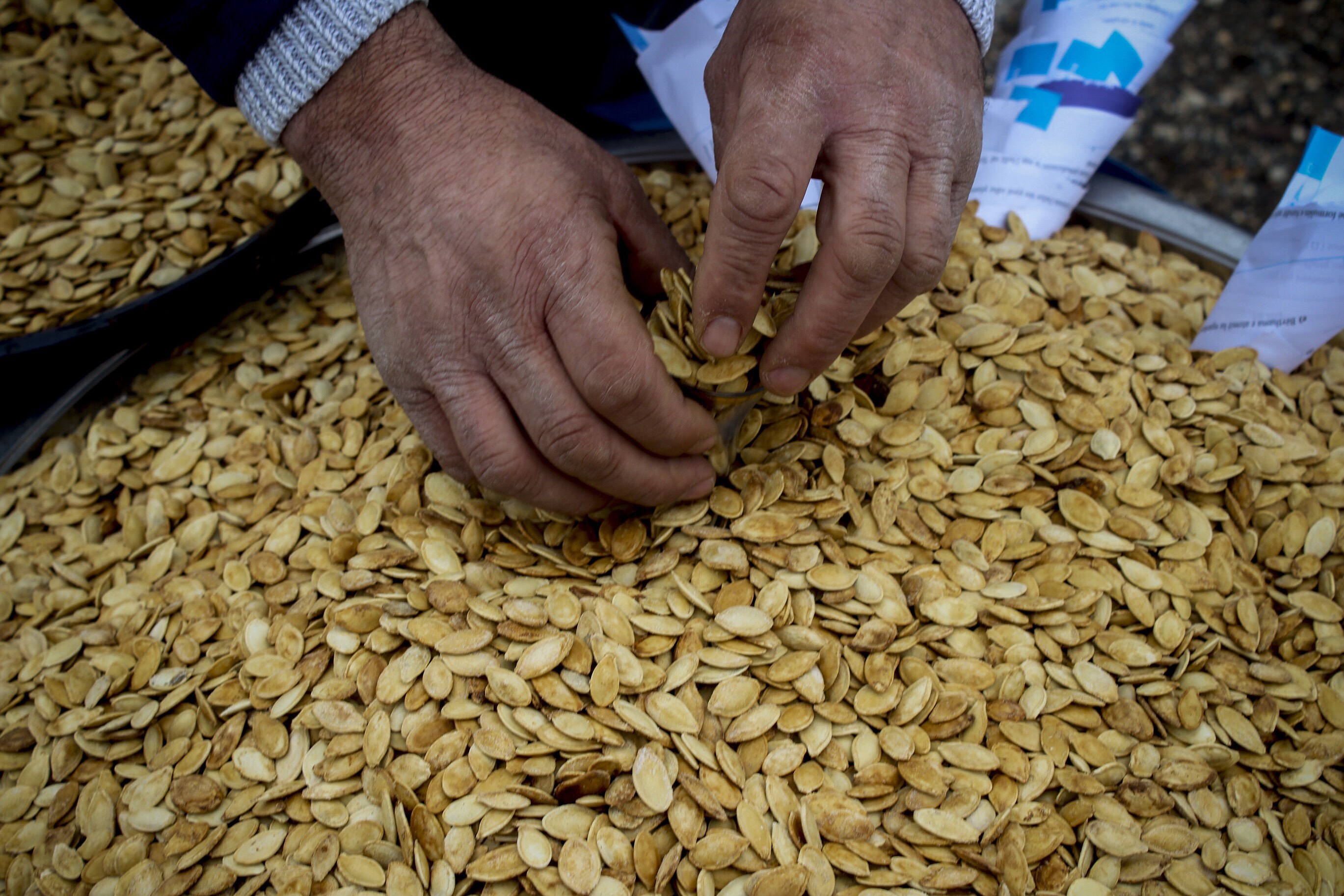 Rrustemi sells seeds at markets across the country. “I go everywhere, to Prishtina, Podujevo, Malisheva, to almost every market,” he says, adding that he also sells seeds at basketball halls, as well as on public holidays, and whenever there are big gatherings of people.

The entire Rrustemi family is engaged in getting the seeds ready for sale. Remzi’s 22-year-old son was his sales partner until a few months ago, when he decided to leave home and head to Germany seeking a better life for himself and his family.

“Selling seeds became boring for my boy – that’s why he left,” Rrustemi says. “But there is my wife and on occasion my daughter to give me a hand. We all try to work together.”

According to data from the Ministry of Labor and Social Welfare there are 1,054 registered job seekers in the Municipality of Vushtrri, however the number of unemployed is estimated to be much higher, around 5,000.

During winter, Rrustemi buys pumpkin seeds in Fushe Kosove, at a price of three euros per kilogram. But he also owns 50 acres of farmland in which he grows pumpkins and corn, which he sells during the summer. “Summer is more profitable,” Rrustemi says. “I can’t do anything more. I earn enough not to beg in the streets.” 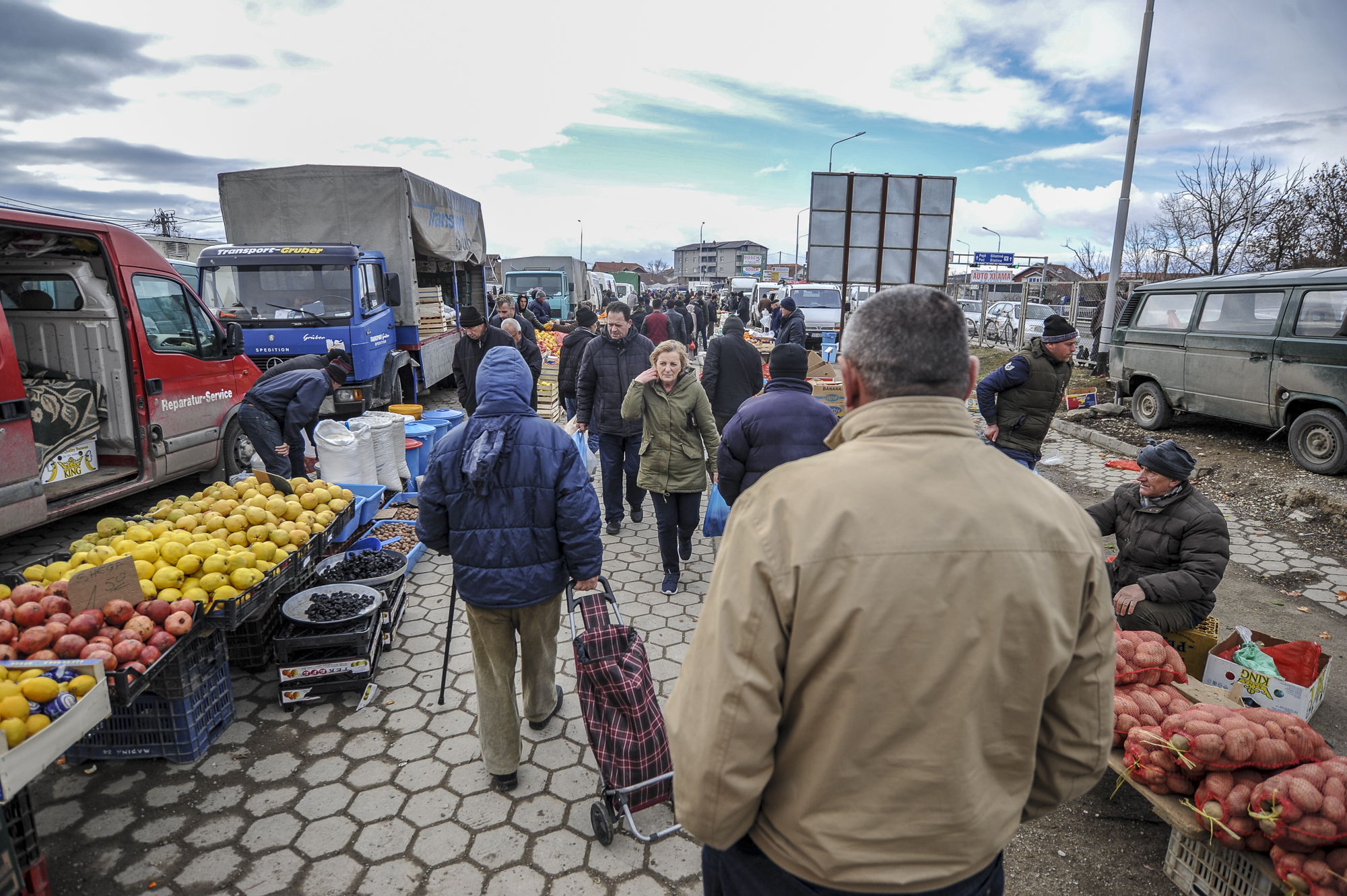 As the market closes, Rrustemi takes home his plate with the rest of the unsold seeds, hoping that the next market will be more profitable.

25-year-old Nehat Vatovci is also from Vushtrri and comes to the outskirts of Prishtina for the market every Sunday morning. His wheelbarrow, which he balances a wooden plank across to sell drinks and various groceries, doesn’t have the kind of cigarettes someone is looking for.

With the market in Prishtina receiving a huge number of visitors, Vatovci says the day pays off well, although winter is harder. “Winter is hard, we sell more cigarettes and some cakes, but we sell less drinks,” he tells Prishtina Insight.

Vatovci says has traded at the market for the last two years alongside his father. However, while he walks among the people at the market looking for business, his father stays at a stall. “Dad has a fixed place where he sells because he’s old and can’t walk,” Nehat explains.

Vatovci buys his goods mainly in large warehouses and stores and sells them for a small markup, but says he can’t charge too much as he is competing with a large chain supermarket close to the market.

Due to severe economic conditions, Vatovci says he was forced to abandon his education after attending university for about a year. “I completed high school in Vushtrri, then enrolled myself at the Technical Faculty in Prishtina, but shortly after that I had to quit as I had to commute and could not afford it,” he says, anger creeping into his voice as he pushes his wheelbarrow.

Angered by the socio-political situation in Kosovo, Vatovci says he hopes there will soon be a lot of Kosovars leaving the country in search of a better life. He is amongst those who are waiting for a German working visa, and is attending a German language course three times a week in Vushtrri.

According to data released by the German Embassy in Kosovo, about 13,000 work visas were issued by the embassy in 2019 alone, while thousands of others are awaiting their departure date, Vatovci along with them.

“I have to find a way to leave Kosovo,” he says.

Josep Borrell: ‘We are not competing with the Americans’