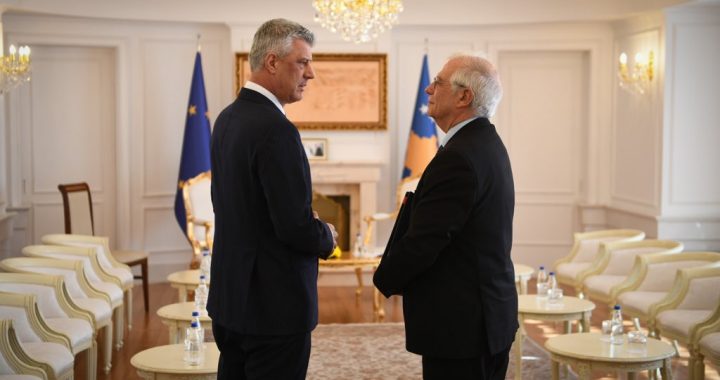 Josep Borrell: ‘We are not competing with the Americans’

Josep Borrell, the EU’s new High Representative for Foreign Affairs and Security Policy visited Kosovo on Thursday asking for trust in the EU’s role in the Kosovo-Serbia dialogue.

At a press conference after the meeting, the EU’s foreign affairs chief asked for “trust” in the EU’s role in mediating the dialogue between Kosovo and Serbia, which has been suspended since late 2018.

“I came here to ask for your trust and confidence,” said Borrell. His visit to Prishtina was described as a demonstration of the EU’s commitment to the Kosovo-Serbia dialogue by a press release from its External Action Service on Wednesday.

Asked if the EU’s role as an intermediary in the dialogue is being challenged due to recent American involvement in Kosovo-Serbia relations, including the mediation of an aviation agreement between the two countries by US Ambassador to Germany Richard Grenell, Borrell stated that there is no competition between EU representatives and the Americans.

“We are not competing. We want to cooperate, we want to work together,” Borrell said. “We are not looking for protagonism, we pursue the same interests, the same objectives. I told the president [Thaci], that there is no rivalry. Maybe we [the European Union] are not very outspoken, but in practical terms we are doing a lot.”

The EU diplomat also confirmed that Kosovo has fulfilled all of its obligations regarding the visa liberalization issue, but could not promise a date by which the procedure would be completed.

“I know that Kosovars want to travel freely, as any other country in Europe… I know that the visa issue is a sensitive issue, and I fully understand,” he stated.

Thaci stated that Kosovo is disappointed with the EU’s failure to lift visa restrictions for Kosovars. “I have to be open and honest, the EU has made a strategic mistake keeping the visa regime for Kosovo,” the Kosovo President told the press conference. “Such isolation and treatment of Kosovo is completely unfair, and is impeding our European future.”

The EU first set out Kosovo’s roadmap towards visa liberalization in 2012. However, no further progress towards a visa-free regime for Kosovars to travel in the Schengen Zone has been seen since September 2018, when the European Parliament agreed to launch negotiations with other EU institutions to waive the visa requirement.

Borrell will also meet with the parliamentary groups elected to the Kosovo Assembly following the October 6 parliamentary elections. However, the Democratic Party of Kosovo, PDK, have decided to boycott the meeting with the EU official.

In a press conference on Thursday morning, PDK leader Kadri Veseli stated that the party would not be attending the meeting with Borrell, claiming that the meetings are meaningless in the absence of a new government and institutions, as well as a form of protest against the “degradation” of the EU-led dialogue.

“We welcome the visits of any EU officials,” Veseli said at the press conference, adding that he appreciates the EU’s efforts in the path to normalization of relations between the countries of the Balkans.

“We want our lack of presence to be understood as a sign that the process of dialogue has degraded in recent years,” Veseli continued, before describing the EU as lacking a “decisive” and “proactive” attitude as mediator of the dialogue.

Since 2011, Kosovo’s delegation at the EU-mediated Brussels dialogue has always been led by officials from PDK.

As part of his trip to Kosovo, Borrell also launched an EU-funded air quality project and will visit Kosovo’s second largest city, Prizren. The EU official’s next destination will be Serbia, for meetings with the Serbian President Aleksandar Vucic and other political leaders in Belgrade.