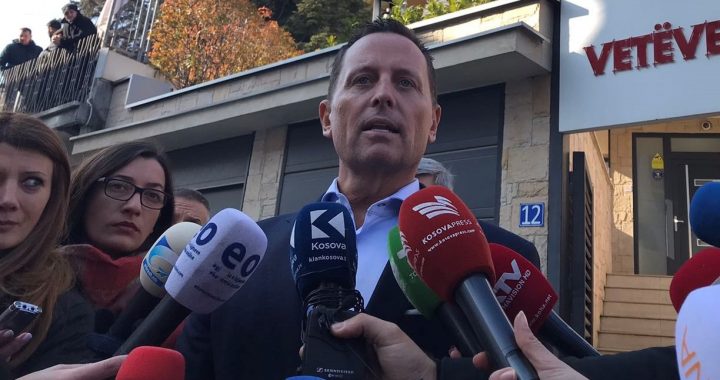 US special envoy to the Kosovo-Serbia dialogue Richard Grenell visited Belgrade and Prishtina this week, encouraging both governments to focus on the economy, while calling for the withdrawal of Kosovo’s 100 per cent customs tariff on Serbian imports and an end to Serbia’s campaign encouraging states to ‘de-recognize’ Kosovo.

Richard Grenell, the US ambassador to Germany, who was appointed in October 2019 as a ‘special envoy to the Kosovo-Serbia dialogue’ by US President Donald Trump, visited both Kosovo and Serbia this week.

Grenell started the week by unveiling an agreement between officials from Kosovo and Serbia with German airline Lufthansa that could facilitate flights between Prishtina and Belgrade at the US Embassy in Berlin on Monday afternoon. By Wednesday night he had arrived in Prishtina and attended a working dinner with Kosovo President Hashim Thaci.

Speaking to the media following the dinner, Grenell put a focus on economic issues, as he did throughout his trip. “We want to develop this region economically,” he said. “Young people need jobs, that’s President Trump’s policy. That’s why I’m here. I don’t want to get involved in the political debate, because that is leaving us behind.”

The US diplomat consistently reiterated the need to leave political issues to local actors, while encouraging engagement in job creation and developing the economy. At a press conference in Belgrade following his meeting with Serbian President Aleksandar Vucic he stated:  “All I’m trying to do is focus on creating a dynamic economy. I’m going to leave the politics to you all.”

Grenell also insisted that the current deadlock over forming Kosovo’s next government was “not his issue,” a position he says he restated at a meeting with Vetevendosje leader Albin Kurti at the party’s headquarters in Prishtina on Thursday. Kurti was officially proposed by the party as their nomination for prime minister on Monday, giving him 15 days to present a government to the Kosovo Assembly with a coalition agreement yet to be reached between Vetevendosje and the Democratic League of Kosovo, LDK.

One issue Grenell did seek to address was the 100 per cent customs tariff on Serbian goods, imposed in November 2018 by Kosovo’s previous government led by Ramush Haradinaj.

The US special envoy first mentioned dropping the tariff on Twitter, responding to a tweet from Hashim Thaci by stating that “We must make progress – which includes dropping the tariff.” After his meeting with Kurti, Grenell told the media that “the tax issue remains important – it should be lifted.”

Thank you, Mr President. We must make progress – which includes dropping the tariffs. https://t.co/PnM02q5jUR

However, it seemed as though the US diplomat was hoping for something of a trade: in Prishtina, following the meeting with Kurti and another meeting with LDK, Grenell told the media that he had shared his vision of both abolishing the tariff and Serbia halting its derecognition campaign against Kosovo.

In August 2019, Serbia’s Minister for Foreign Affairs Ivica Dacic spoke publicly about his ministry’s efforts to reduce the number of UN memer states recognizing Kosovo to below 50 per cent. Serbia’s foreign service claims 15 countries have annulled their recognition of Kosovo, including Madagascar, Suriname and Papua New Guinea, though the Kosovo Ministry of Foreign Affairs refutes the assertion.

In Belgrade on Friday, Grenell told the media that he had made it very clear that the tariff, which President Vucic claimed has cost Serbia 435 million euros since its imposition, must be dropped, but that the de-recognition campaign must also be stopped.

Dacic told reporters at the Serbian parliament on Thursday that withdrawing the tariff could not be considered compensation for halting attempts to encourage the withdrawal of recognitions. However, he welcomed the increased interest of US officials in unblocking the EU-mediated dialogue between Kosovo and Serbia, which has been halted since late 2018 following the imposition of the tariff.

Regarding the dialogue, Grenell insisted that there has never been a deadline for Kosovo and Serbia reaching an agreement. Kosovo President Hashim Thaci, though, seemed optimistic, stating after his dinner with Grenell that he believes that under the leadership of President Trump, Kosovo will achieve much more peace, stability, and a final agreement with Serbia.

Thaci also thanked the Americans’ involvement in what he described as a “historical deal,” in reference to the aviation agreement signed on Monday.

In Belgrade on Friday, Grenell also mentioned discussions on both sides about an agreement regarding a rail link between the two countries. Grenell later told Kosovo media that an agreement on a Prishtina-Belgrade railway line had been reached in principle, and that expert level discussions would commence on Monday in Berlin.