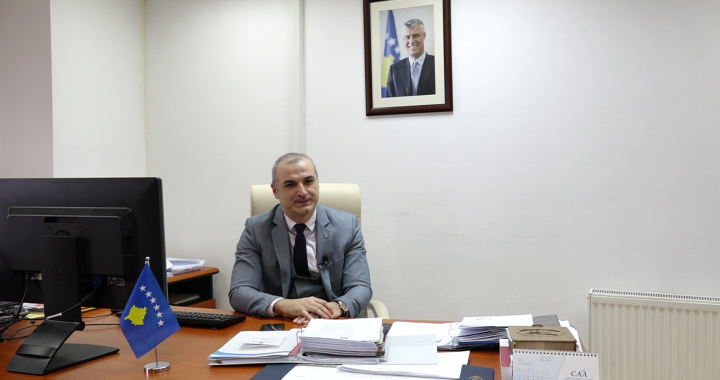 Speaking exclusively to BIRN, head of the Kosovo Civil Aviation Authority Eset Berisha outlines some key details about the recently signed aviation agreement that could facilitate flights between Belgrade and Prishtina.

On January 20, at the US embassy in Berlin, representatives from the Civil Aviation Authority of Kosovo and the Serbian Ministry of Economy signed a letter of interest with German airline Lufthansa, opening up the possibility of direct flights between Prishtina and Belgrade.

The letter of interest was signed under the auspices of US ambassador to Germany, Richard Grenell, who is also the newly appointed US special envoy to the Kosovo-Serbia dialogue. His work was hailed by US President Donald Trump, who labelled the development as ‘a win’ in a Tweet.

While Trump insisted that the agreement meant there will be direct flights between Serbia and Kosovo for the first time in a generation, the exact terms of the letter remained shrouded in uncertainties, with few details released over both its content, or how such an agreement was reached.

Speaking exclusively to BIRN, head of the Civil Aviation Authority who led Kosovo’s delegation in Berlin, Eset Berisha, is clear on the second point: “The whole process was led by the US embassy in Berlin,” Berisha said. “I cannot tell you how many meetings we held, but the meetings were intensive and all parties were involved.”

Berisha promised that in the next few days the Ministry of Transport would publish the letter of interest, but was not able to share further details with BIRN. However, he did explain that he was authorized to sign the letter by the outgoing minister of Transport Pal Lekaj, a member of the Alliance for the Future of Kosovo, AAK, the party of outgoing prime minister Ramush Haradinaj.

Haradinaj told the media on Wednesday that the agreement is not a breach of Kosovo’s sovereignty. “It’s a step forward for Kosovo. Not backwards. Kosovo has moved forward with this [agreement],” said Haradinaj.

For Berisha, what was agreed on Monday does not constitute a direct deal between Kosovo and Serbia. The Head of the Civil Aviation authority described it simply as an agreement between his organization and Lufthansa, to help facilitate direct flights between Prishtina and Belgrade.

Currently only Lufthansa has expressed in running a commercial line between the two capitals. “For the time being, only Lufthansa has requested to start flights,” Berisha said. “But it is not excluded that other companies in the future would have the same will, depending on economic interest, and the need for transporting people and goods.”

Another detail revealed was that the flight would be direct, and not part of a connecting journey to any other destination. “The German airline has taken the support of the state of Kosovo only for flights between Prishtina and Belgrade and vice versa, without other points which means that the same plane cannot move to other destinations,” Berisha said.

On the concerns over the use of documents, Berisha explained that the agreement between Kosovo and Serbia on Integrated Border Management signed in Brussels in 2011 will be used, meaning that ID will be permitted for use for travel between Belgrade and Prishtina.

When asked about claims from Serbian representatives that the flights would only become operational when Kosovo scraps its 100 percent tariffs on Serbian imports, Berisha was dismissive. “Its senseless to sign a deal that will not be implemented,” he said. “I don’t know for what reason they signed then.”