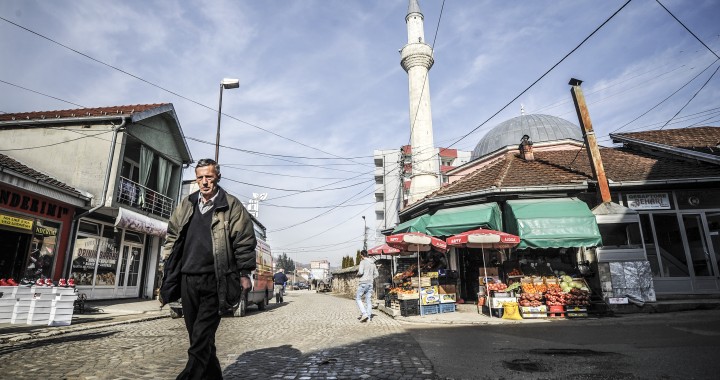 With the New York Times trumpeting that Kosovo society has experienced a 'turnabout' against the West, we look at two myths about Kosovo and its overblown problem with radical Islam.

The spectre of hate is haunting the debate about “ISIS”, “violent extremism”, “Islamic radicalism”, and what not in Kosovo. Little space is being given to reason. When fear judges before reason, little is left to be understood. I will not argue here that there is no space for concern, but the alarm bells that are sounding are leading our understanding about the phenomenon in the wrong direction. There is a lot to be said. Given the editorial limits, I will focus on the details of two, among many, alarms raised about the “Arab invasion” of Kosovo that paradoxically have materialized only recently as reports were coming out that in the past 6-12 months no Kosovar has joined the (foreign) fight! This could or could not be true but it does not matter at this point.

Alarm 1: The Arab impact on Kosovo’s “turnabout” from the West

Those pounding on the Kosovo ISIS issue construct a yet ungraspable colossal association between Kosovo’s 300 foreign fighters and the country’s 1.8 million population. When I check my inbox it is hard to find journalists (local and foreign) who do not associate the 0.0167 percent of the 1.8 million population with the entire country’s alleged “turnabout” against the West.

To begin with, what does the foreign fighter phenomenon have anything to do with a country’s position towards the West? This is like claiming that France has turned against the West because 1,700 foreign fighters took off from France. Or looking at the other side of the same coin, this is like claiming that given that Turkey has four times less foreign fighters per capita than France, Turkey has become pro-Western – contrary to France! The simple logic behind such associations is flawed on so many levels that a very thick book would not suffice to deconstruct it.

Second, we need to look at some simple data that people around the world work hard to make available to us. For instance, when reporting in the manner of how Saudis have “transformed once-tolerant Muslim society into a font of extremism” the New York Times stated that “[i]t is a stunning turnabout for a land of 1.8 million people that not long ago was among the most pro-American Muslim societies in the world.” The use of past tense is striking in the above statement, because it simply does not correspond to empirical data available.

For instance, according to 2015 data, 94 percent of Kosovo’s citizens stated that the country should join the EU, and 89 percent were in support of membership in NATO. On the other hand, this is what some of the EU citizens think about the same thing: in the United Kingdom around 52 percent want the country out of the EU. At the same time 50 percent of the citizens in the EU’s eight largest member states would want a UK-style referendum for a potential exit. Similarly, only 41 percent of the Europeans perceive the EU positively.

Let’s look at a few other numbers, now related to the United States. In 2015, 93 percent of Kosovo’s citizens said that the country should further strengthen its partnership with the US. Moreover, this is what the most recent 2016 Gallup data show: Kosovars top the list of all the Western countries to approve of the American leadership in the world, with 88% approving. When the Americans themselves are asked about the same thing, only 55 percent approved of their country’s leadership in the world. This is what some of the Western Europeans think about the same thing: 49 percent of the Italians, 57 percent of Germans, 52 percent of French, and 64 percent of the British approve of the American leadership around the world.

The sounding of alarm bells that one sees in some of the recent news reports about Kosovo’s de-westernization and its “turnabout” remain myth, as evidence shows – not my personal opinion.  We need to admit though, that these data do show one stark difference between Kosovo and the rest of the West after all. And that is that despite decades long isolation from the West, Kosovars think of and want the West almost twice as much as the Westerners themselves want the West.  How is it that the Kosovars want Europe more than the Europeans do, and want America in the world more than the Americans do? If there is room for concern about Kosovo’s “turnabout”, then these are the questions that we should be concerned about, not the other way around.

Alarm 2: The killer term of “Wahhabism”

“Container terms” have been long used to destroy political opponents in struggle for power. These are terms that turn into containers consisting of a cocktail of terminologies that large number of people come to despise over time in a given society. Look at Bernie Sanders, poor guy, and what he has to go through for being labelled a “socialist” – a killer term that he’s been working hard to try to explain that “it is not what it means,” while his opponents make their way into struggle for power.

It would be too ambitious to deal with container terms, because it does not matter what they actually mean. What matters is the cocktail of terminology that the “container term” consists of. “Wahhabism” is yet another container term widely (mis)used in Kosovo after the war, and in the Balkans for around two decades. In Kosovo, “Wahhabism” has the following connotations: “radical”, “radical Islam”, “long beard”, “head cover”, “extremist”, “violent extremist”, “ISIS”, “Al-Qaeda”, go figure. As such, it has been a very successful tool used in two dimensions. First it has been used by the members of the Islamic Community to destroy their opponents within the institution. Second, it has been used by some in the public to destroy anybody that does not look like a “good old liberal Muslim.” Whether one is a real “violent extremist” rarely mattered.

To demonstrate this, there are a number of questions that remain unanswered by the most frequent users of “Wahhabism” as a container term against those that do not look like a “good old liberal Muslim”. Given that whenever “liberal imams” get into physical fight (whatever the reason), it has been established as an undeniable fact that it is the “Wahhabis” who have attacked them. Fair enough, this has most likely happened. Now, how is it that Lavdrim Muhaxheri (the violent extremist) has threatened also some of the “Wahhabi” imams as they came to be labelled in Kosovo? How is it that a liberal imam in BIK was also attacked by another liberal imam? These are serious questions, that disturb many myths, and those that have used the term “Wahhabism” as a political tool to destroy others in their struggle for power never liked these questions to be raised. This was evident when KCSS’s report took the issue of foreign fighters seriously, where it raised and then answered such questions in detail, and exposed the misuse of the term in people’s struggle, more for individual political concerns, and less for religious concerns.

Well, actually KCSS’s report is not the only time in which these dynamics were exposed. In a book published in 2015, Cecilie Endersen, in her chapter investigating what we here call “Wahhabism” in Albania, finds that Lidhja e Hoxhallarëve – LI (“Wahhabis” in Kosovo’s terminology) might be theologians without connections to alleged “Wahhabism” and that “nepotism to some extent informs the LI’s rejection of the [official Islamic Community] as ‘clannish'” (p.  231). Similar claims about the misuse of “Wahhabism” to destroy opponents are advanced also by the scholar of Islam in the Balkans, Ina Merdjanova (2013). This is not to say that there are no “Wahhabis” in the very meaning that it has acquired publically, that is evident (as KCSS’s report has also shown), but it has evidently been misused to incomprehensible extent for many years. Many journalists in the past 15 years have fallen prey to not being able to see these dynamics – for very understandable reason that doing so necessitates a lot of research on the ground.

Back to the pesky question: can somebody engage yet in another unprecedented act within Kosovo’s borders and blow himself or herself up? Of course this is in the realm of possibility. But what does this have to do with anything perverted presented in the media so far?

Lastly, let’s say that my attempts to expose these myths are not true, and every distorted view in the media is. If so, should we then stop asking why so many Kosovars have gone to Syria, and instead ask why so few?

Shpend Kursani is a PhD researcher in the Department of Social and Political Sciences at the European University Institute, where he researches post-1945 cases of contested states. He is also an external senior research fellow at the Kosovar Center for Security Studies where he conducted an in-depth research on jihadi militancy in Albanian speaking areas of the Balkans