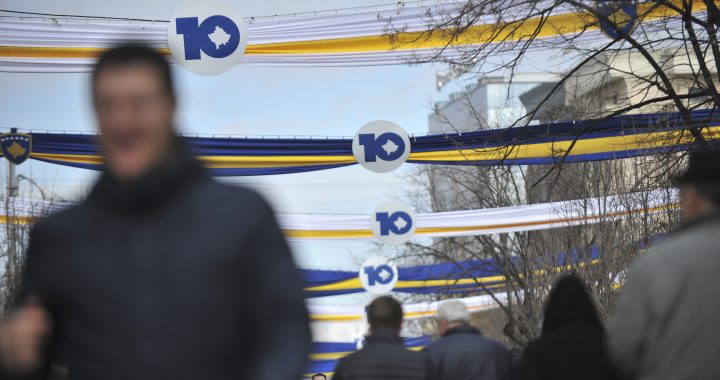 As Kosovo marks its tenth birthday, we need to face a fundamental question: What is Kosovo without its potential future membership to the European Union?

Since declaring its independence in 2008, Kosovo has been recognized by over 110 states around the world and has been admitted to a number of international organizations. The advisory opinion of the International Court of Justice, that its unilateral declaration of independence did not breach principles of international law, was a notable achievement on the international stage. The ongoing support from the United States and the EU have had their noteworthy impact on the development of the young country.

Nonetheless, ten years later, it seems that all developmental processes within Kosovo–such as rule of law, inter-ethnic reconciliation, and human rights–that are quintessential in making a state  sustainable have become interchangeable for Kosovo’s ‘European path’ or ‘European future.’

In the discourse of Kosovo’s ruling parties and the discourse of public intellectuals in Kosovo,  the finalization of Kosovo’s statehood and its transformation into a sustainable state have been continuously used interchangeably with Kosovo as a future EU member. In other words, Kosovo has been reified as ‘a potential member to the EU’ while simultaneously decoupled from developmental processes that are crucial to making a state. To simplify, it is difficult to imagine Kosovo as a functioning and finished state in the present, in the now, rather than as a state that is in the making and will eventually become part of the ‘European family.’ Granted, due to the unorthodox relations between Kosovo and the EU, it may be logical to connect Kosovo’s development and Kosovo’s future with the EU. Yet, such a structural and conceptual dependence cannot be feasible in the long run.

Ten years after Kosovo’s declaration of independence, it is not only critical, but imperative to ask whether we can imagine the existence of Kosovo irrespective of the EU.

The EU is the biggest financial donor in Kosovo: it makes the biggest investment per capita in the world. Since 2009, it has deployed to Kosovo its biggest rule of law mission to date, EULEX. In coordination with the World Bank, the IMF, and the governments of the US and other Western European countries, the EU’s support in Kosovo stretches out from rule of law and security all the way to jazz concerts. Since 2008, the EU has offered Kosovo a declarative support that, its ‘neutral status’ notwithstanding, it guarantees and projects Kosovo as a future member of the EU. At the same time, Kosovo is the only country in the region that does not enjoy visa liberalization with the EU.

Kosovo has thus been placed in a perennial trajectory of a European-like country that is always to-come, but never present, never accomplished. This has put  Kosovo in a liminal condition that is both present and non-present. In other words, Kosovo is both a state and not a state at the same time; it is both unequivocally invited in the ‘European family’ and remains outside of it.

Elsewhere I have explained that Kosovo sees itself not as the EU’s well defined ‘other,’ but as an interception or interruption between the EU/West and another ‘other,’ be that Turkey, the ‘Arab World’ or something else. With the establishment of its ‘European future’ as the only road to follow, Kosovo has been brought up to face a multi-layered ambiguity of  its own. What is Kosovo? What is the meaning of Kosovo without its ‘European future’ and its prospect for EU integration? What will Kosovo  be within the EU?

Kosovo’s identity resides between its socialist and collectivist heritage, and the promise for a democratic, ‘European’ state. This ‘liminality’ was initially caused first by historical factors and second by the international intervention in Kosovo.

First, following the break-up of Yugoslavia, Kosovo experienced its first alienation with its socialist and collectivist heritage. Associated with the previous regime, this heritage  was disregarded as a system of government, but remained very much present within the political culture and the social reality. This heritage continues to this day, although it is ‘muted.’ In 2013, Mehmet Kraja, an academic from Prishtina, wrote that Kosovo distances itself from everything that is non-Western (social democracy, leftism, et cetera) because it is afraid of identifying itself with what it really is.

Second, the successive international missions and structures in Kosovo have systematically disregarded such heritage, be it in the form of cultural heritage, collective culture or system of governance. Instead, the internationals mark the establishment of the Kosovo state in 2008 as ‘year zero’ – disregarding its past and reifying it as a democratic and economically liberal project of the ‘European family.’ This ‘year zero’ has been symbolically sealed with the EU-inspired Kosovo flag, and the wordless national anthem called “Europe.”

Such a conceptual and financial dependence on the EU has had a direct impact on how Kosovo’s people, and in particular the political elite, view statehood and developmental processes. A number of processes that are crucial to establishing sustainable development and peace in Kosovo have been attributed to its foreshadowed European future and not to the existence and the development of Kosovo as such.

First, Kosovo’s sovereignty, albeit contested, has been transferred to Brussels with ruling elites seeking more legitimacy from Brussels and EU technocrats in Prishtina rather than from their voters. The national elections of 2010–in which Hashim Thaci, former leader of the Democratic Party of Kosovo, won the majority–were qualified as “an industrial theft of the free vote.” Despite the large number of evidenced  cases of electoral fraud, EU leaders had congratulated Kosovo on the “calm and orderly” election day and the “participation of all communities” (referring to ethnic minorities). The EU-facilitated dialogue between Prishtina and Belgrade was afoot and the EU was eager to work with a newly formed government, even if that meant turning a blind eye to the “industrial theft of the free vote.”

The second element pertains to post-war reconciliation with Serbia, which is key to provide long-term stability within Kosovo and in the Balkans. Since 2011, the EU has taken the lead as a facilitator in the so-called technical dialogue between Prishtina and Belgrade. Throughout the process, the dialogue has been characterized by its ambiguity, lack of transparency, and problems in the implementation of the agreements, making it a process that is more important for the future of Serbia and Kosovo in the EU rather than for the “normalization” of relations between Kosovo and Serbia, and even less so for the relations between Albanians and Serbs within Kosovo.

A third example is the EU’s requirement for Kosovo to demarcate its border with Montenegro in order to proceed with Kosovo’s visa liberalization. After ongoing disputes, Kosovo’s Assembly is set to vote next week in favour of the border demarcation with Montenegro, after years of opposition and controversy.  Local media and analysts in Kosovo have been adamant and apprehensive that failure to vote in favour of the demarcation would not only add to the ongoing isolation of Kosovars, who cannot travel visa-free in the Schengen area, but more importantly, would seriously endanger Kosovo’s relations with the EU.

Evidently, all three cases indicate how major political processes are shaped by the projected vision of Kosovo as a member of the ‘European family’ rather than as an independent state as such.  The interchangeability of ‘Kosovo the state’ and ‘Kosovo the future member of the European family’ poses a fundamental question about the state-building project.  It risks to  further disenchant locals in Kosovo (irrespective of ethnicity) with a state that takes its substance and its meaning primarily and only as a future EU member state.

Kosovo is in a dire need to redefine its raison d’etre and more importantly to redefine its projected place in the ‘European family.’. Eventual integration to the EU cannot remain an aim in and of itself, but a process that is a result of a well-functioning state.