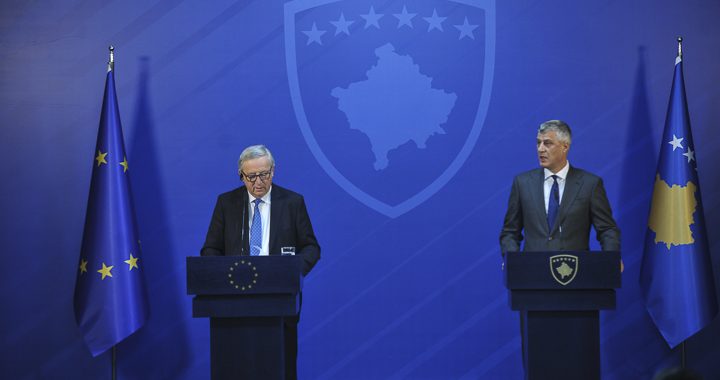 Accompanied by the High Representative and EC Vice-President Federica Mogherini and the European Neighborhood and Enlargement Commissioner Johannes Hahn, Juncker arrived in Kosovo after visiting Macedonia, Serbia, Montenegro and Bosnia and Herzegovina.

In Prishtina, Juncker spoke about the need to pass the demarcation agreement with Montenegro and the need for reaching a binding agreement with Serbia on normalization of relations.

“It is crucial for your country to vote on demarcation, it’s a key step, inevitable and absolutely necessary for visa liberalization,” he said at a joint press conference with Kosovo President Hashim Thaci.

The Kosovo Assembly failed to assemble and vote on the demarcation agreement with Montenegro once again today.

“I’m not pleased that Kosovars are the only ones who cannot travel, they should have the same rights, with the condition that they pass this agreement and continue the fight against organized crime and corruption,” Juncker said.

Juncker declined to offer a set date for potential visa liberalization for Kosovo.

Juncker is the first European Commission President to visit the country.

The visit of EU high officials comes weeks after the EC published its new strategy for the Western Balkans, a confirmation of promises made at the Thessaloniki Summit in 2003.

The strategy foresees an accession 2025 perspective for current candidate countries like Serbia and Montenegro if they undergo crucial reforms in rule of law, security, migration and socio-economic development, amongst others.

Kosovo President Hashim Thaci said that the meeting with the EU officials and PM Haradinaj was very productive and that he once again confirmed to his guests that “European values are enshrined in our culture.”

President Thaci also spoke about the Kosovo Assembly once again postponing a vote on the 2015 border demarcation agreement with Montenegro.

“We also discussed visa liberalization. Although it is clear that the Assembly did not manage to ratify the agreement today, I don’t want to comment because I’m sure that it will be ratified soon,” Thaci said, adding that Kosovo has more work to do even once the deal passes.

President Thaci also commented the need for Kosovo and Serbia to reach an agreement on normalization of relations, saying dialogue is key.

“I expect the EU to take its role in this process and to try as soon as possible to reach an agreement. Dialogue is the only way, otherwise we might have obstacles,” said Thaci.