Young artists from Mural Fest Kosovo have brightened up the greyer corners of Prishtina with dozens of painted interventions, but some have questioned whether the new works are in keeping with the city’s urban art heritage.

Tucked behind the large statue in Skanderbeg Square and down a small set of stairs sits what is called a pad-mounted transformer.

More commonly referred to as ‘those big grey electric boxes,’ transformers are a necessary eyesore in the capital, locked steel cabinets that contain the elements required for the distribution of electricity around the city. One box in particular sends electricity to the Kosovo Government, and artist Ermira Murati decided to have fun with something as mundane as the government’s electricity supply. 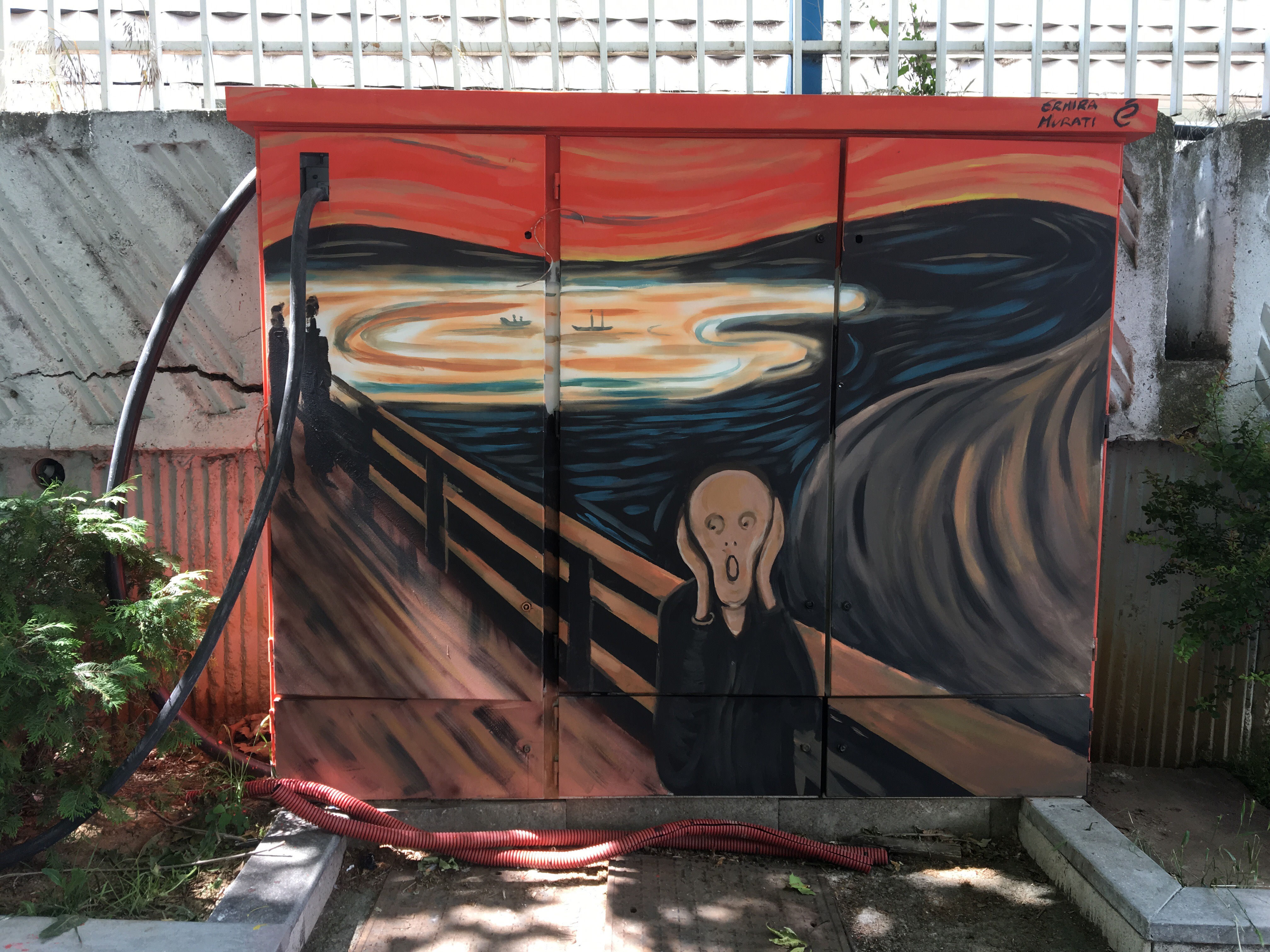 Ermira Murati paints Edvard Munch’s ‘The Scream’ onto a pad-mounted transformer that faces the premises of the Kosovo Government. Photo: Antigone Isufi.

While this wasn’t how Edvard Munch intended his most famous piece to be viewed (the original can be found in Norway’s national gallery), Murati believes that context is everything and this is a great example of how the location of a piece of art can speak as loudly as the painting itself.

“This was very intentional, because of the current political situation,” says Murati. “This woman screaming is the people of Kosovo represented, who are shocked by what they are doing to us.”

Over last Friday and Saturday, Murati, artist Debora Hetemi and around 20 other young people painted countless murals and installations all over the capital – ranging from an homage to ‘The Starry Night’ by Vincent van Gogh to playful, cartoonish redecorations of the Prishtina’s pedestrian crossings.

The artists are from the youth wing of Mural Fest Kosovo, an annual Ferizaj-based festival that specialises in designing and executing paintings and graffiti on the sides of buildings around the country. They tell Prishtina Insight that they are happy with what they’ve accomplished.

“I think Prishtina really needed this,” says Hetemi. “You don’t notice that remote corner of the town or that power box that needs a pop of colour until it’s there. It gives these little places importance.” 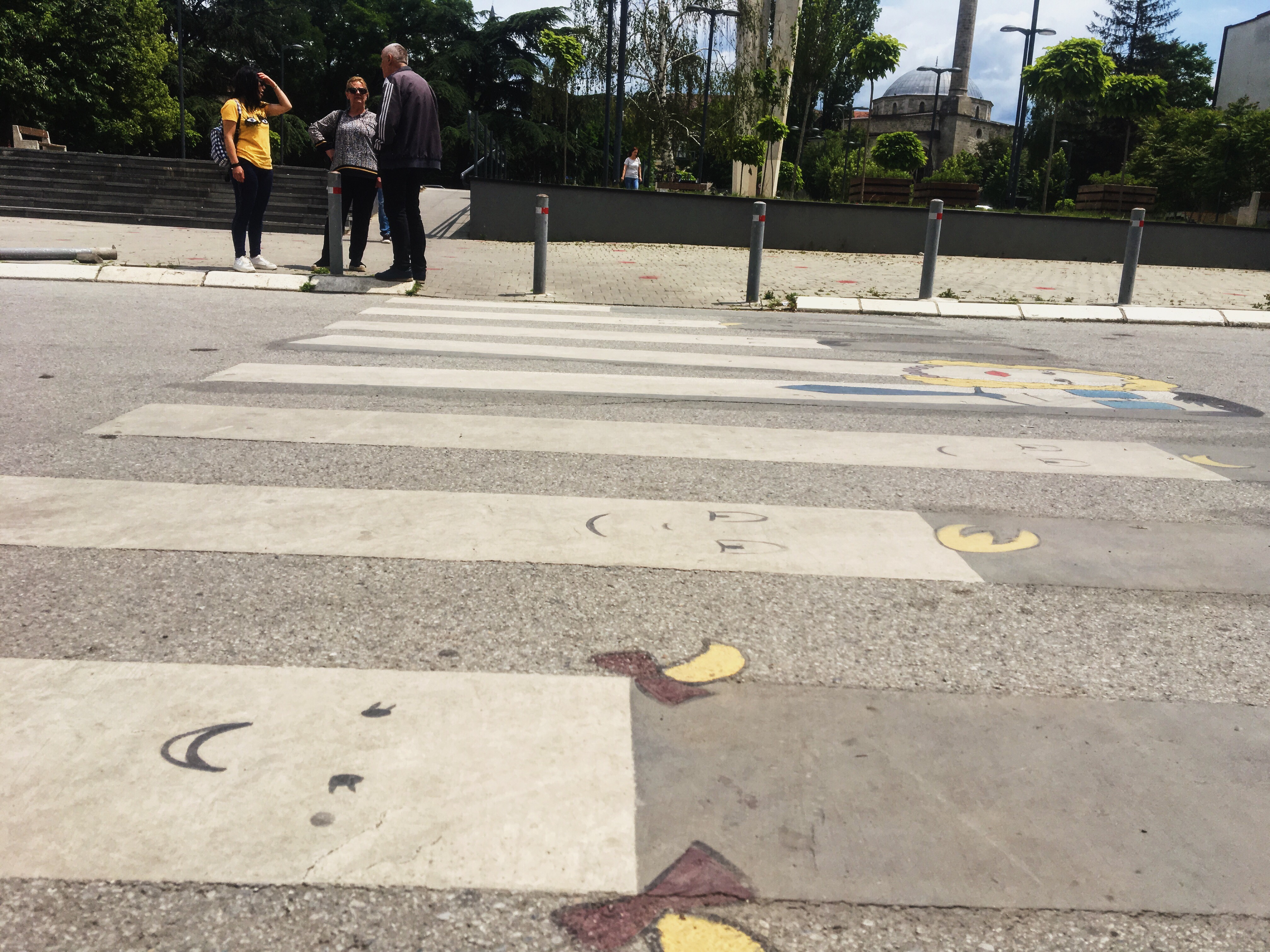 The organiser of Mural Fest Kosovo, Lebibe Topalli, says that while she prefers that the organisation didn’t get too political, once the younger artists that she works with had the idea to paint ‘The Scream,’ she couldn’t say no. “The dissatisfaction of artists is artistically expressed dissatisfaction,” she says.

According to Topalli, the Municipality of Prishtina was behind the idea for Mural Fest volunteers to paint all over the city. While she says that they were provided with barely enough money to cover their expenses, Topalli is grateful that the municipality gave Kosovo young artists free rein to express themselves artistically and politically, turning Prishtina’s centre into an outdoor art gallery. 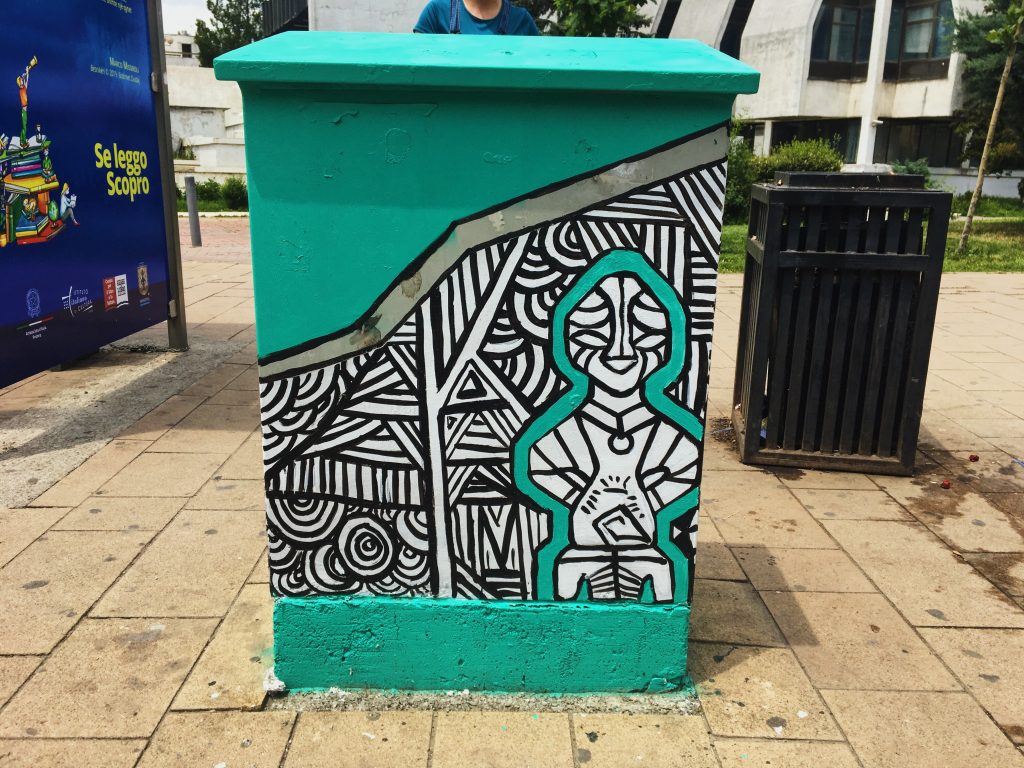 Mural art has been used in Prishtina since before the war as a method of both ‘beautifying’ grey areas of the city and spreading political messages. According to Fitore Berisha, the founder of Prishtina’s first Mural Art Group, MAG, in 2003, mural initiatives need to be carefully planned given both the history of the use of graffiti as a form of protest in Prishtina, and its quite permanent and public nature.

She is unsure whether this has been achieved here. “In my opinion, murals have to be planned well and be authentic,” she tells Prishtina Insight. “It is so important that they are executed properly, as these are long lasting works that are in a public space.”

Among the most recognisable interventions, Murati, Hetemi and the other young artists painted Gustav Klimt’s ‘The Kiss,’ and Pablo Picasso’s ‘Buste De Femme.’ The participants explained that these murals were a response to their own frustration over the absence of gallery and museum spaces in Kosovo, believing that this contributes to a commonly held understanding that art is inaccessible, leading to disinterest in painting as a part of Albanian culture. 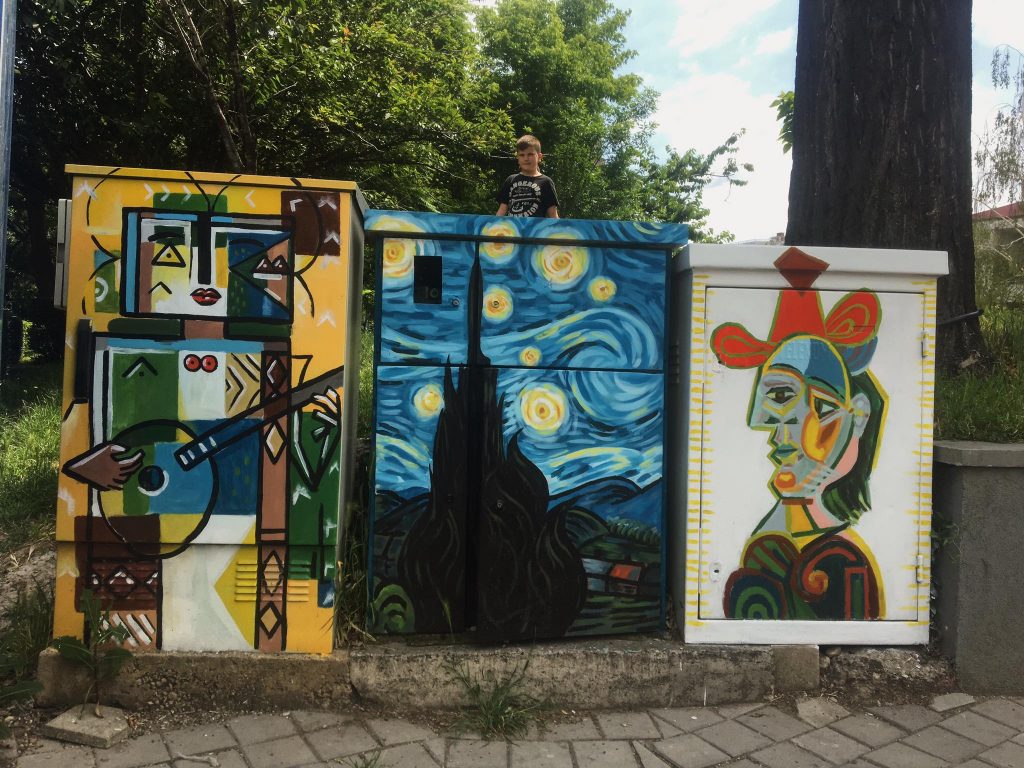 According to Hetemi, showcasing the work of famous international artists gives people the chance to see the most influential art in the world that people may not be aware of. “Painting is such a large part of culture, but our culture nowadays doesn’t take interest or showcase the kind of artists we’ve had,” she said. “That Kosovo’s artistic history isn’t on show or celebrated in the same way, makes me feel terrible.”

Berisha disagrees, noting that new forms of artistic expression, including the growing popularity of mural painting, is evidence to the contrary. “Especially art in public spaces is much more accessible than it used to be,” she said. “In 2003 when I started the Mural Art Group, it was my passion and my goal to beautify the grey old buildings of the city after the conflict. But it was so challenging back then to do it on our own.”

In response to their belief that Kosovo hasn’t had the opportunity to celebrate its own artists, the Mural Fest participants also painted several of the most famous pieces by Ibrahim Kodra, an Albanian post-impressionist painter.

Hetemi explains that despite Kodra’s importance to Albanian artistic culture, she believes his work is barely known here. “He was one of the artists that really brought an unusual way of painting to Albania,” she says. “He broke the mold for more alternative forms of art.” 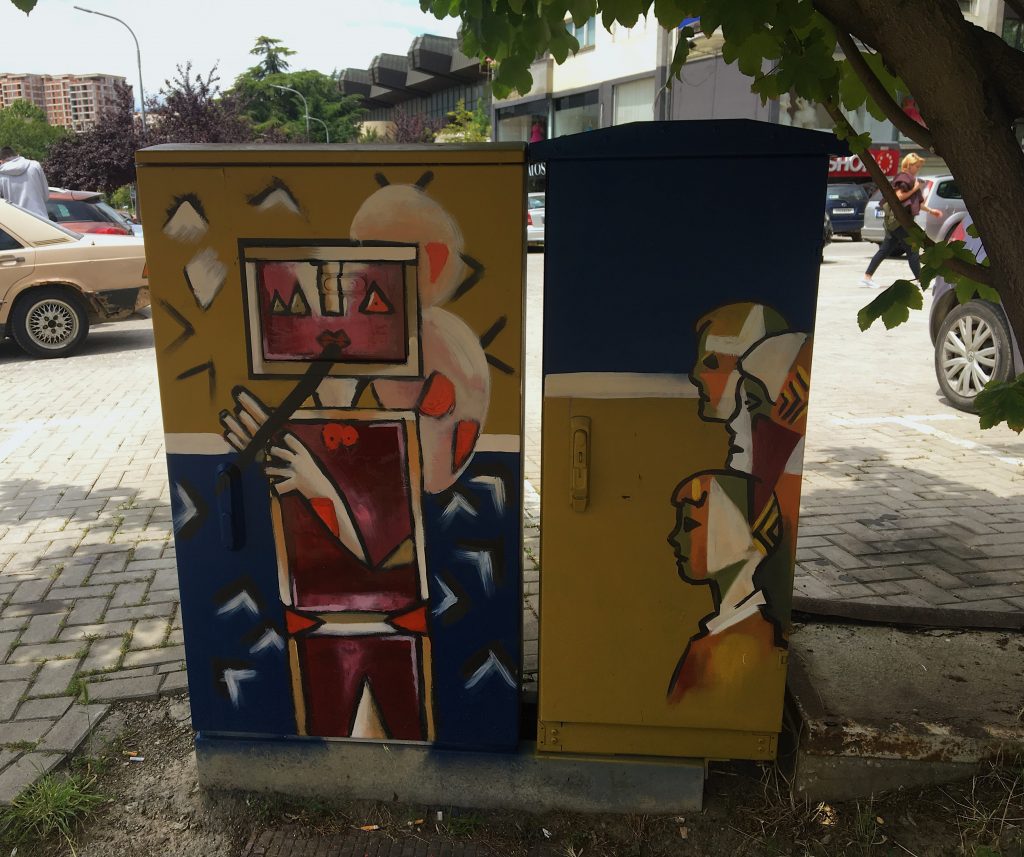 She and Murati are confident that their murals around the city will contribute to the public realising how much artistic talent there is in Kosovo that is worth celebrating.

This is what Mural Fest has been trying to achieve for the last five years, says Topalli. In 2019 alone, Mural Fest was responsible for two huge artworks in Prishtina, one painted as part of the FemArt festival in collaboration with Dutch artist Judith van Leeuv, and another completed by Mural Fest volunteers as part of the EU’s Climate Diplomacy Week. 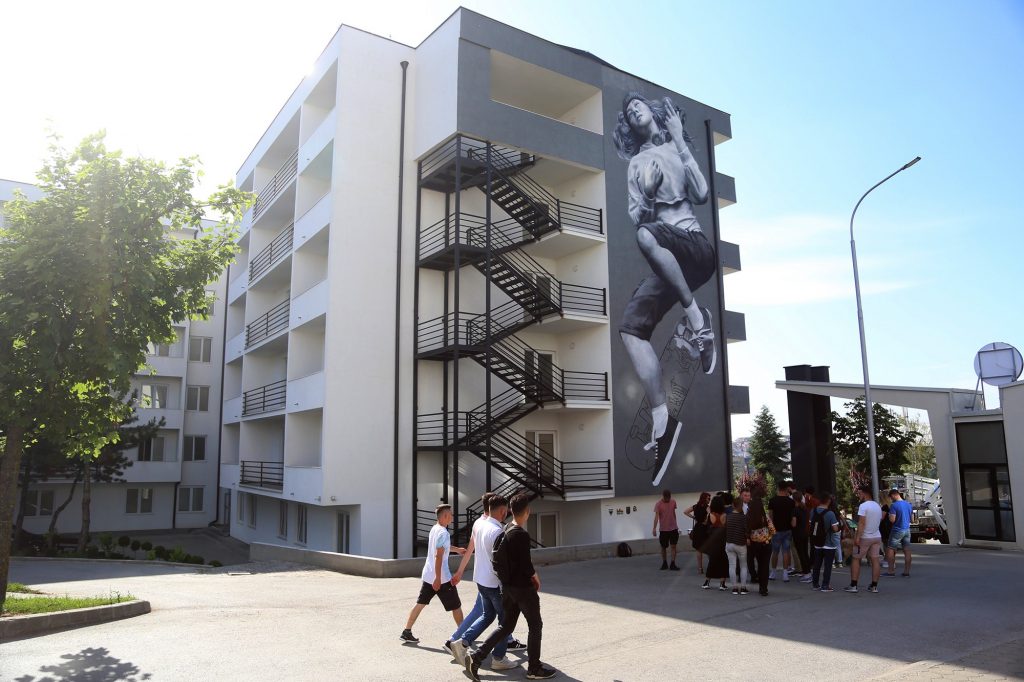 Topalli hopes that these murals represent a chance for people to look at the city differently, which might encourage young people to take their own artistic initiatives elsewhere. “At the moment, people here still view art as a luxury, but we are already seeing that changing as more people begin to learn about art,” she says.

However, Berisha expressed concerns over Mural Fest’s initiative. In October, the artist was behind the design and painting of the mural of Vetevendosje activist Astrit Dehari, completed under cover of darkness and without a permit, on the wall of the ABC Cinema in the centre of Prishtina. Her tribute was part of a commemoration held in Dehari’s honour, just a week after a Swiss forensic institute published a report stating that there was a possibility that Dehari was murdered while in detention in 2016. 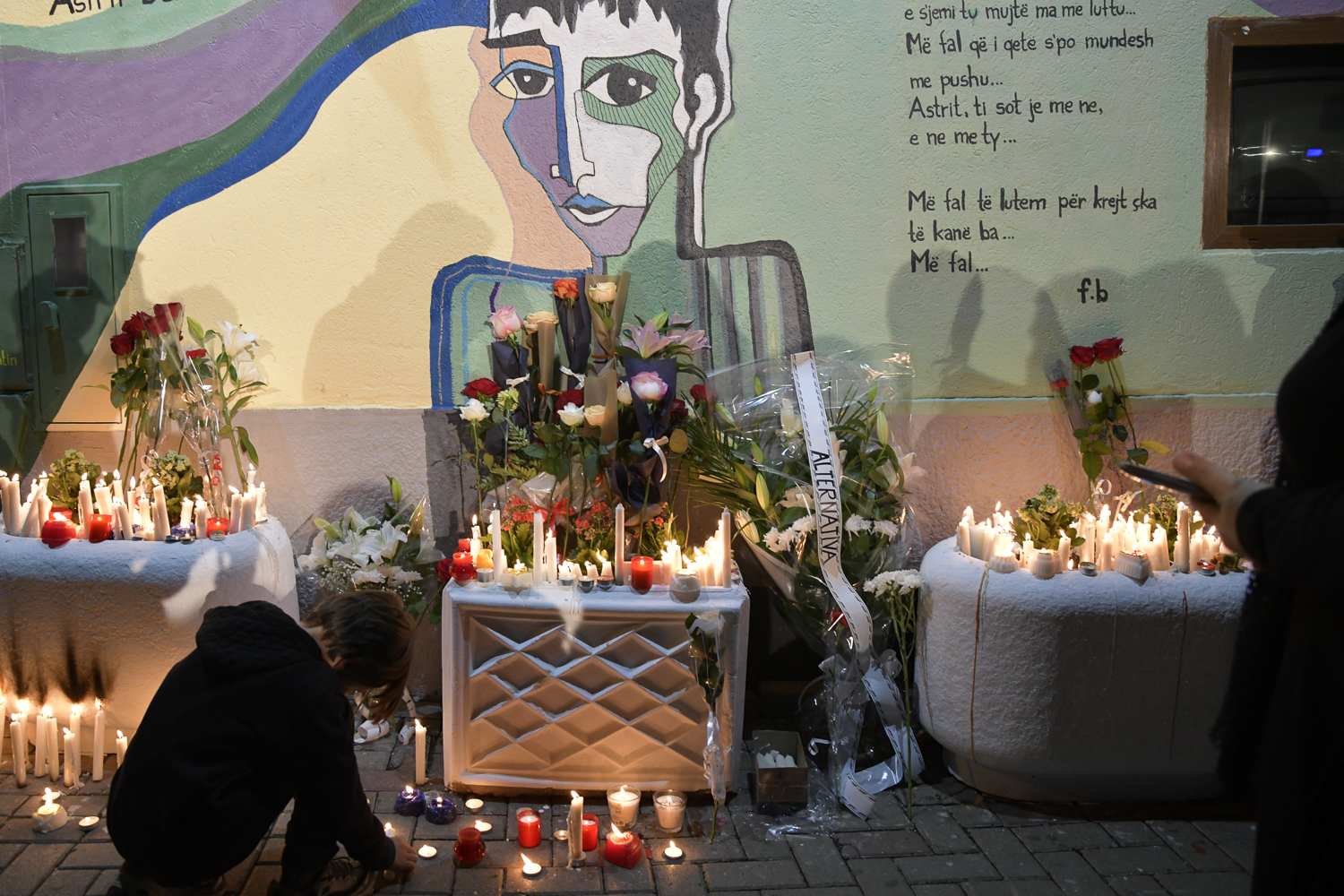 In Berisha’s opinion, mural artists must carefully consider what they decide to paint on Prishtina’s walls. “Graffiti has been used as a form of revolt against the deeply political situations that have been going on for the past 21 years here,” Berisha told Prishtina Insight. “With Astrit Dehari’s portrait, like the tags asking where Ukshin Hoti is, I was expressing my anger as a mother and as a citizen.”

According to Berisha, she respects mural art that acts as a direct response to a government’s failures, but without proper planning, these messages can be taken the wrong way and can be viewed as inauthentic. “Murals should be making the area where they are being painted more beautiful, but the statement they are making must also be clear,” she said.

One of the murals put up around the city was a portrait of Salvador Dali, which covered up both a tag calling for a Kosovo Republic dating back to the 1990s and an artwork of French graffiti artist Thomas Vuille. Berisha believes that while there is an argument in favour of covering up this graffiti, it has to be done for the right reasons.

“It’s been there for a long time, why not cover it up and create something that shows Prishtina has moved into a new chapter?” she said. “If it is replaced by something more meaningful, something long lasting.”

According to Hetemi, there are certain pieces completed by the youth of Mural Fest that are aiming to send such messages. By painting a small reimagining of Michelangelo’s ‘The Creation of Adam’ which is found on the ceiling of the Sistine Chapel in Rome (and also in a larger mural completed by Mural Fest in Ferizaj), the participants transformed this famous image of two hands reaching out to eachother into an anti-racist message. 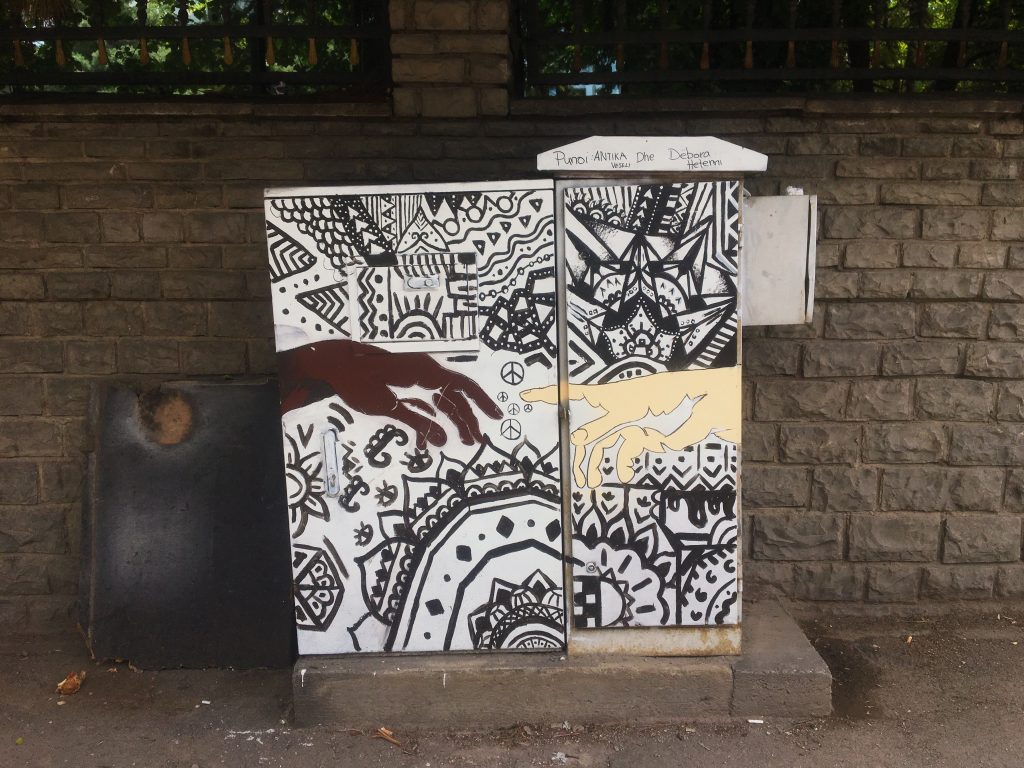 “You can see there is the hand of a white person and a black person, and they have been surrounded by symbols of peace,” explains Hetemi. “This is an important message given the recent death of George Floyd, but the point we’re trying to make here is that no one should have to die for us to pay attention to racism, and that racism here in Kosovo is not given enough attention.”

Even the more lighthearted interventions from Mural Fest are attempting to send a message, they said. The participants painted over some rudimentary scribbled graffiti and broken or damaged infrastructure around the city, poking fun at objects that have fallen into disrepair. 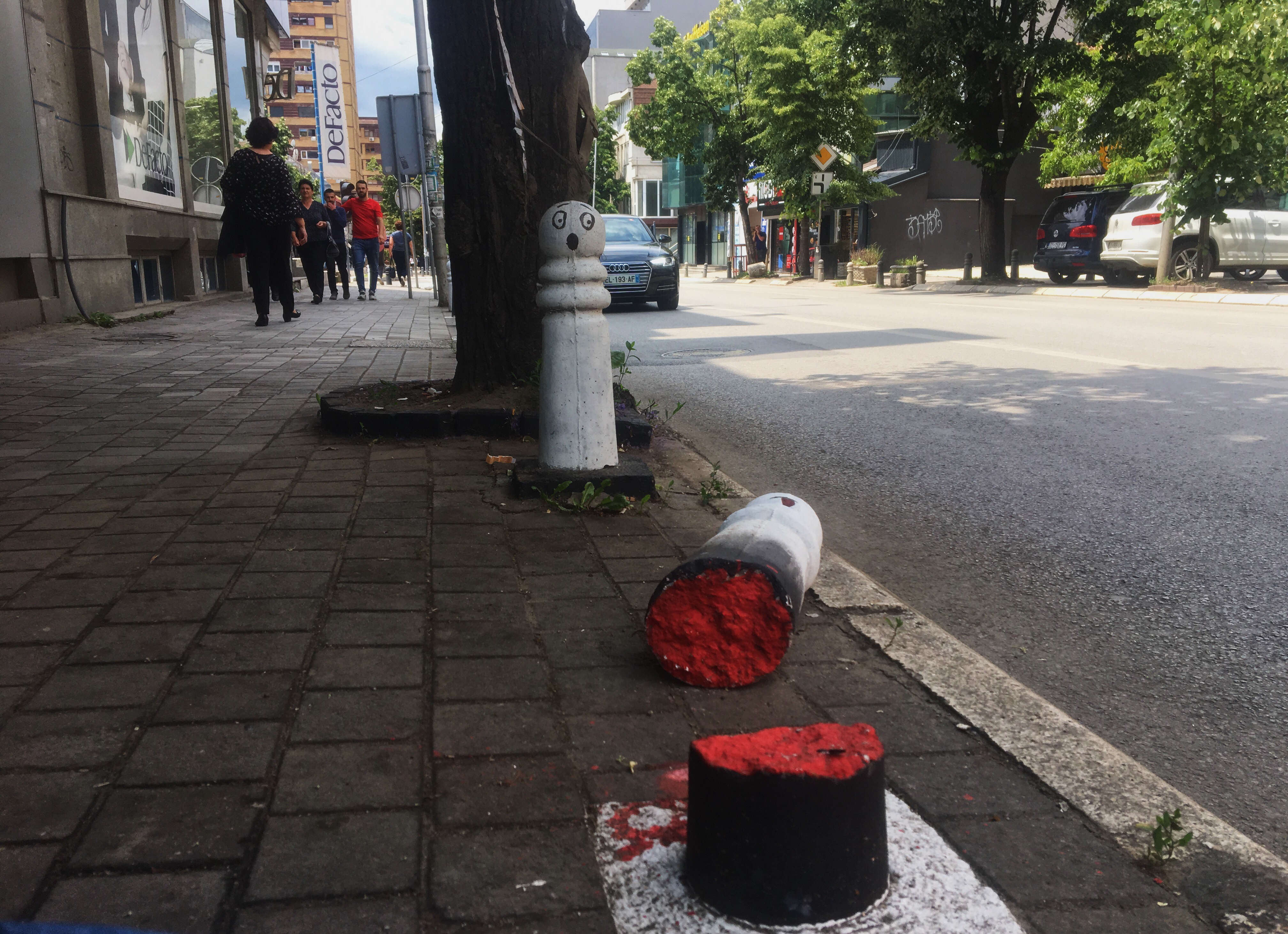 “While these may seem comical, they are a kind of protest for change,” Topalli says, explaining that their work should draw attention to citizens’ ownership of public spaces as well as institutional responsibility to look after the city and the environment.

“With art, we can contribute to change, our artists are raising their voices about these social shortcomings, social problems that concern us as a society. Our goal is to encourage young people to be creative with that voice,” says Topalli.

Krusha e Vogel, the wound that no verdict can heal

by Halim Kafexholli
Next: News