Krusha e Vogel, the wound that no verdict can heal

On Monday, the Basic Court of Prizren sentenced Darko Tasic to 22 years imprisonment for war crimes related to the Krusha e Vogel massacre. Here, relatives and survivors recall the day that 113 of their neighbours and family members were killed.

71-year-old Ajshe Shehu from Krusha e Vogel lost her husband and four sons during a massacre in the village by Serbian paramilitary forces on March 26, 1999. She tells Prishtina Insight that the 21 years since have left her filled with despair.

Her emotional story is interrupted by villagers entering her garden, asking for photos of her loved ones. They want to exhibit them on Monday in front of the Basic Court of Prizren, where the final verdict will be issued in the trial of Darko Tasic, who is charged with committing war crimes relating to the massacre.

Sitting on the sofa, photos of Shehu’s loved ones that were killed by Serb paramilitary forces sit above her and fill the walls of the house. The same forces separated Shehu and dozens of other women from the men in their families, minutes before they were lined up to be executed.

“When they divided us from the men, the Serbs in the village told us: ‘You women either go to Albania or get killed in the River Drin’ and ordered us to leave the village,” she recalls.

Exiting Krusha with the other women, Shehu remembers the last time she saw her husband and four sons. Turning back, she saw her youngest son, 18-year-old Nait, with his cousins. “I said to him: ‘Oh Nait, how can I leave you here?’ He looked at me with tears in his eyes,” recalls Shehu, choking back tears.

The paramilitary groups that expelled Shehu and the other women were not unknown to the residents of Krusha. The same people were living together with them peacefully before the war started, which gave Shehu hope that her family wouldn’t be killed.

But by the time she reached the graveyard at the end of the village, the sound of gunfire was almost constant. Shehu remembers telling the other women that she knew in her heart that her husband and sons had been killed.

With Krusha shelled and burnt to the ground, the women sheltered in a nearby village, where Shehu, her daughter and daughter-in-law, took the decision to leave Kosovo for Albania. However, news of the fate of her husband and sons arrived before they started their journey.

“Qamil [a resident of the village] came at midnight and told us: ‘All of them were killed. Only five or six managed to survive.’ All the women began to cry,” Shehu says. “It was at that moment that I wondered whether I should go to Albania or kill myself in the River Drin.”

When the war ended, Shehu returned from Albania to Krusha e Vogel and began looking for the remains of her husband and sons. She discovered her husband’s head and part of his jacket, but her four sons continue to be among the 68 people still missing from Krusha e Vogel out of the 113 that were killed. 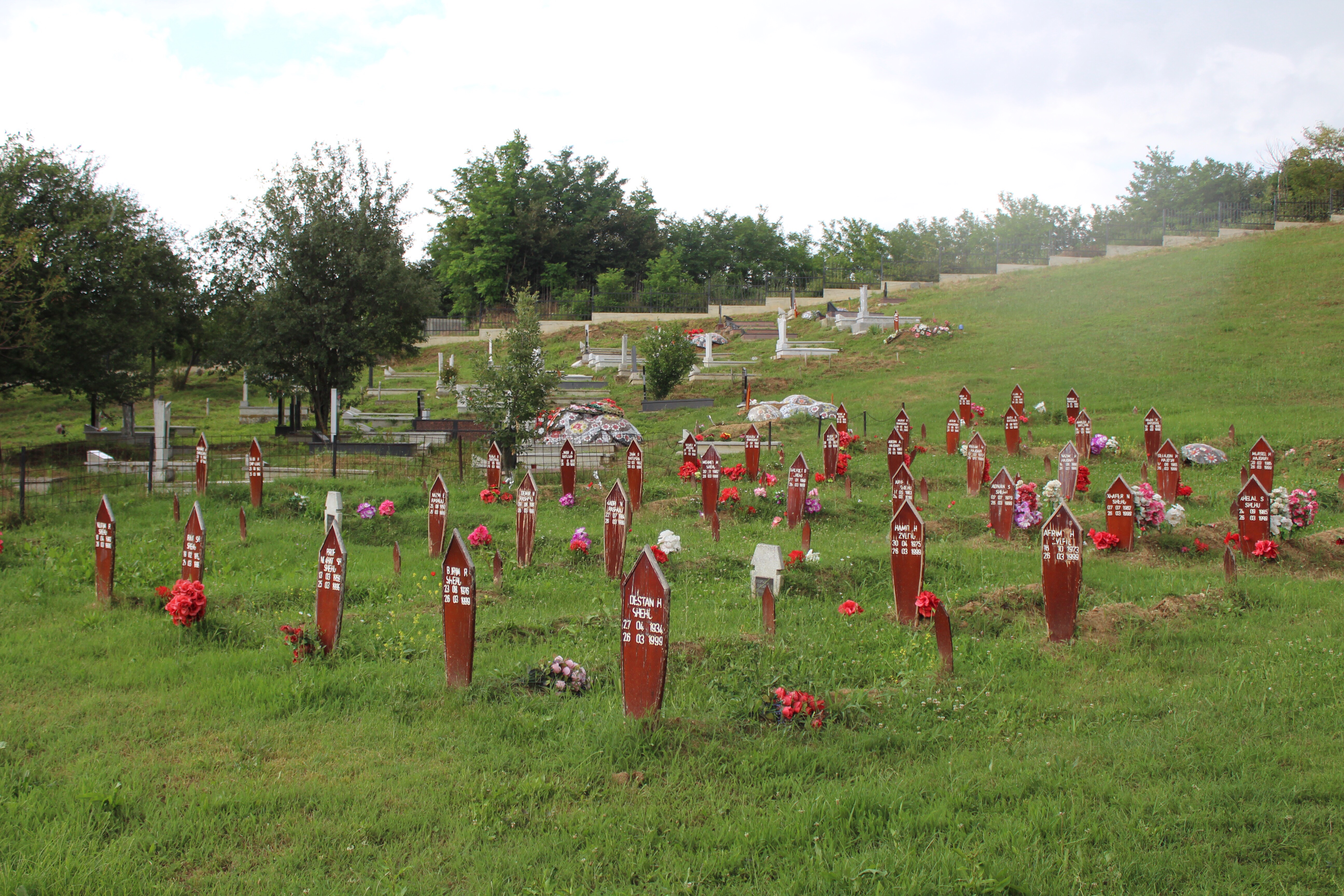 After the war, Shehu says that her life had no meaning, and that working in the garden during the summer is all that helps her overcome the darkness. “If it wasn’t for this garden, I would go mad,” she says.

Outraged with Kosovo those responsible for investigating the crimes, she says that she has lost hope that the remains of her sons will be returned or that there will be any justice for the massacre in Krusha e Vogel. “I will demand justice as long as I live,” Shehu says. “I cannot forget Nait’s white face and the tears falling down his cheek when I saw him for the very last time.”

‘It was because I was underneath the bodies that I survived’

Bajram Zyfliu is among the six people who survived after being lined up to be executed in Krusha e Vogel on March 26. The memories of what he saw that day continue to haunt him 21 years later, and he tells Prishtina Insight that not a day passes without his mind taking him back to what happened.

In the line-up alongside him were teenage boys and men as old as 80. After they had all been gathered together, Serbian forces sent them into a two-room house and began shooting. “When the execution started, some bodies fell on top of me,” Zylfiu recalls. “It was because I was underneath the bodies that I survived.” 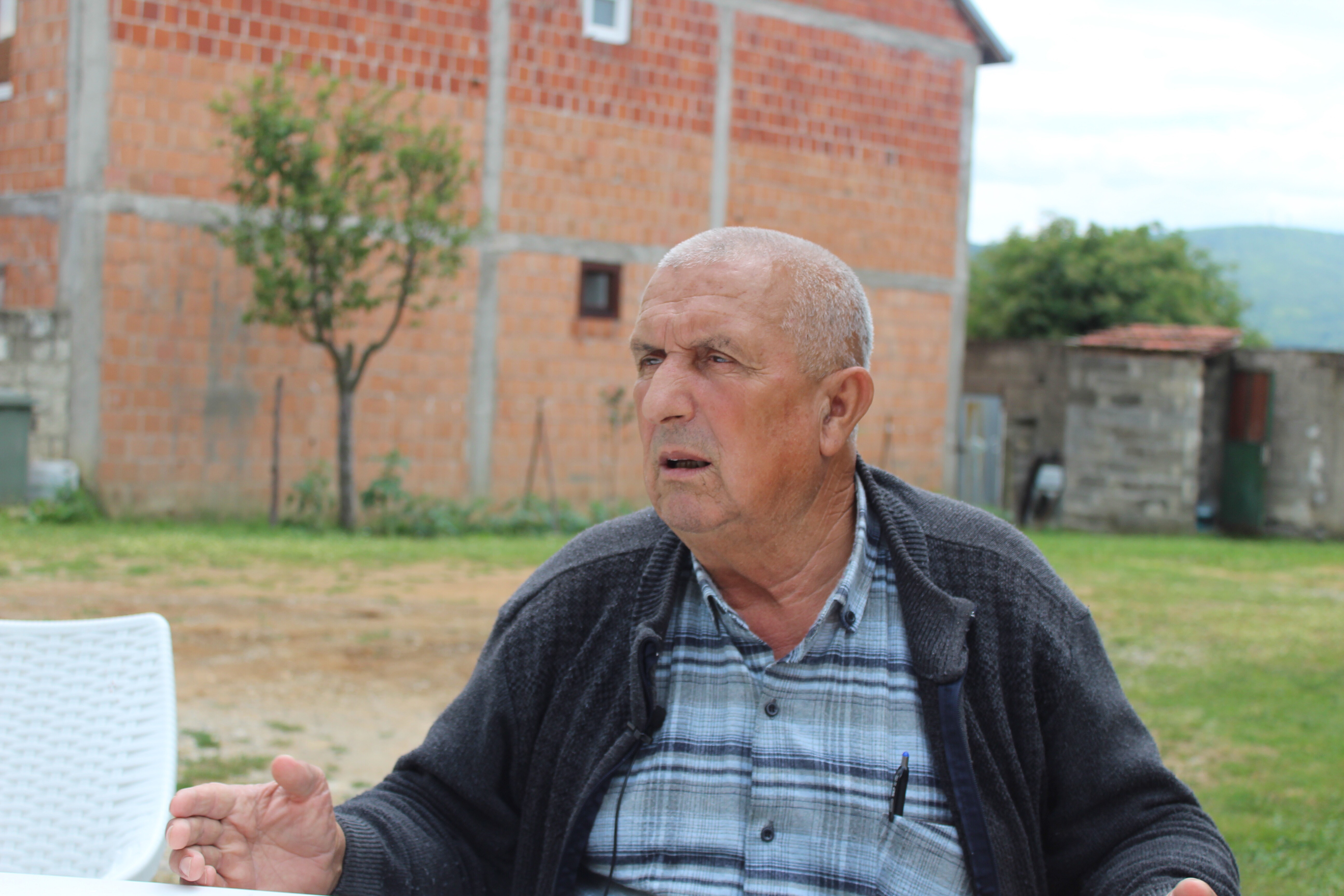 After the Serbian forces stopped shooting, the paramilitaries set the house where the victims were grouped on fire in order to conceal evidence of the massacre that took place. As he felt the heat from the fire getting hotter, and heard the signal from other survivors that the Serb forces had left the house, Zylfiu began to move the bodies that were on top of him.

During his escape, Zylfiu says he was maybe 50 metres away from the house when he was seen by Serb forces. “When we were in the field, they saw us and screamed ‘Cekati! Cekati!’ [‘Wait! Wait!], and we just scattered – I ran through Krusha  e Madhe. Those who ran towards the river were killed, all three of them. Only three of us managed to survive.”

After killing and then setting fire to the bodies of the victims, Zylfiu says the Serbian forces gathered what remained of the bodies and threw them in the River Drin. He lost seven cousins in the massacre, four of whom have never been found.

According to Zylfiu, among those carrying out the operation was Darko Tasic, whom he has testified against concerning his participation in the Krusha e Vogel massacre. Zylfiu says he saw Tasic at the house where the execution took place, throwing the wreckage of the house and a number of dead bodies into his truck.

“I was not far away, and I saw it all with my own eyes. I saw him and other Serbs looting and burning houses in the village,” says Zylfiu, adding that some of the people setting the houses alight had a good relationship with people in the village before the war.

For weeks after the massacre, Zylfiu sheltered in the mountains near Rahovec before managing to reach Albania. “We stayed in the mountains for five weeks without eating or drinking, and all my clothes were stained with blood,” he says.

Returning to live in Krushe e Vogel, years later flashes of memories from that day still come back to him. “I wake up every morning and look at the mountain where I took shelter,” he says. “I think about it every morning, before I even open my eyes. I face it in my dreams. I’m suffering, and my body is so tired. But who cares?”

Around 13:00 on Monday, June 22, Zylfiu arrived at the Basic Court of Prizren, alongside dozens of residents of Krusha e Vogel, mostly women. Half an hour later, the verdict was announced in the trial of Darko Tasic, the only person that the Kosovo justice system has managed to try for the crimes committed in Krusha e Vogel 21 years ago. 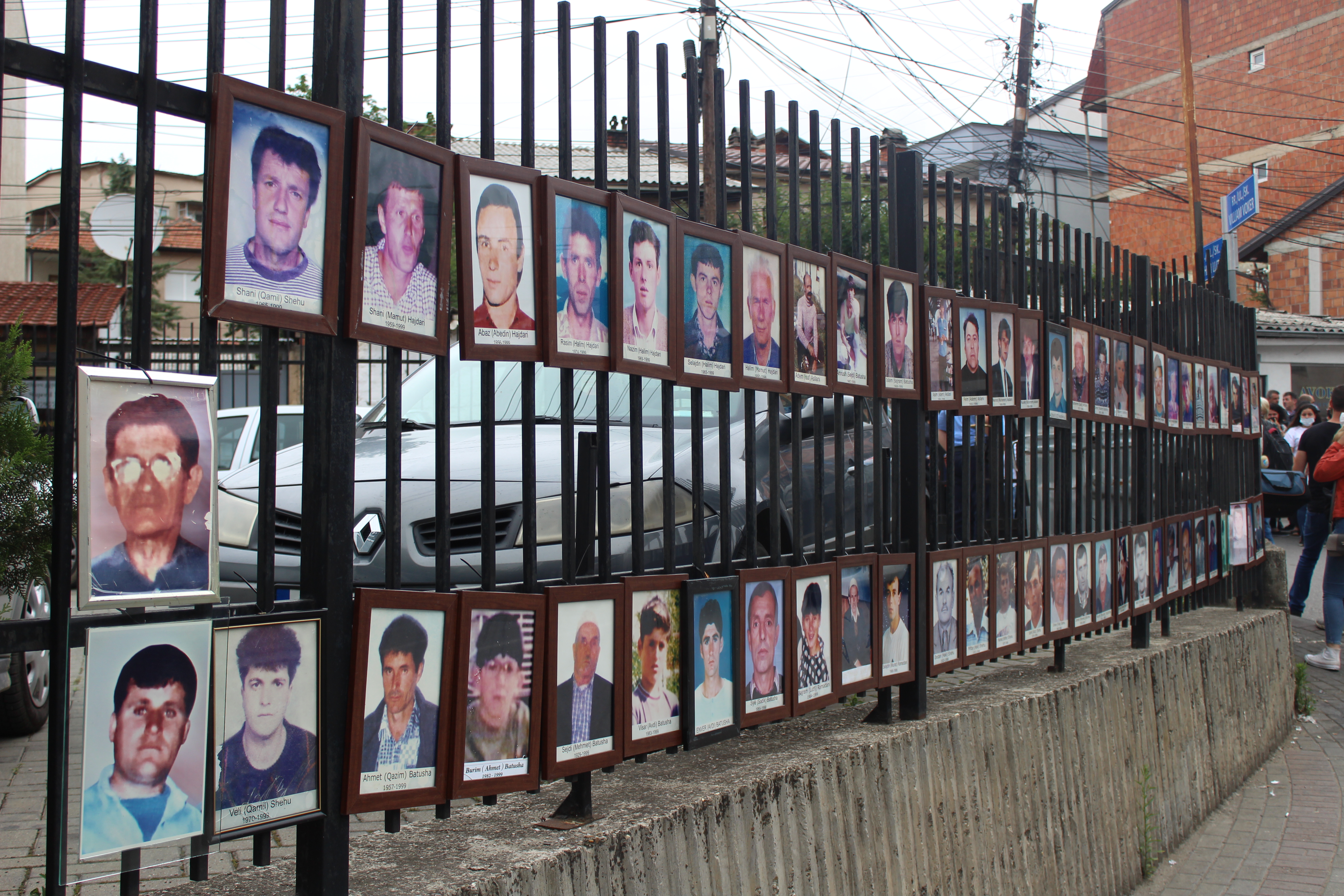 Ajshe Shehu couldn’t make it to the court because of her age, but photos of her husband and sons were affixed to the fence around the Prizren Court. Many other mothers from Krusha also held photos and called for Tasic to receive the maximum sentence possible.

While most residents remained outside the court, Zylfiu was sitting on the left side of the hall when Darko Tasic’s verdict was read, sitting in the corner of his chair, and clasping his fingers together tightly to contain his emotions.

Once the judges were all present, judge Artan Sejrani read the final verdict, sentencing Darko Tasic to 22 years in prison.

The Kosovo Special Prosecution claimed that Tasic, as a member of the Yugoslav police reserve forces, burned the dead bodies and threw them in the river after the massacre. He was also accused of participating in the confiscation of property, robberies, and with the illegal and deliberate destruction of property alongside others whose identity is not known. Tasic was found guilty on two counts: desecrating the bodies of victims of the massacre and participating in the confiscation and looting of property in Krusha Vogel. 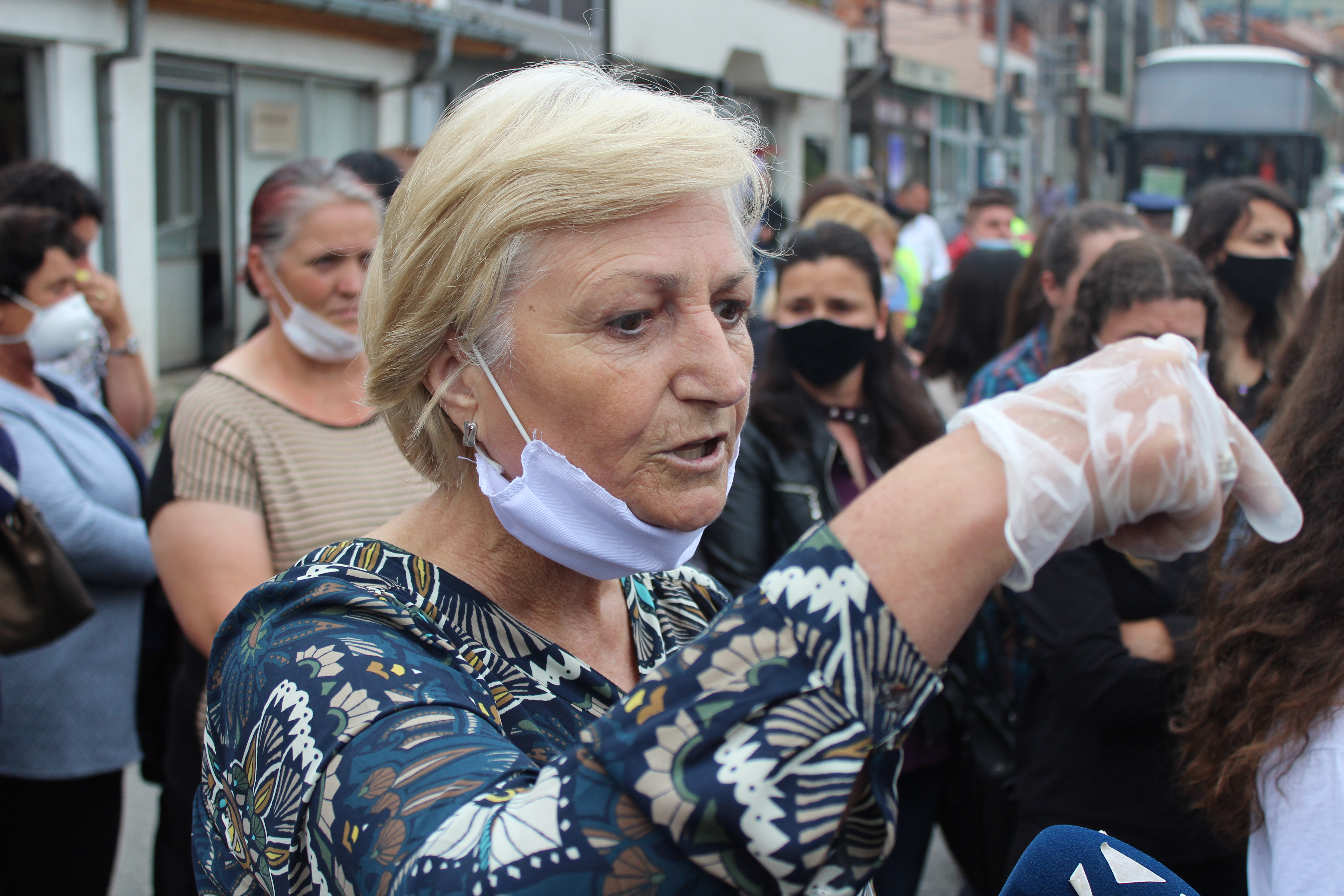 Protesters in front of Basic Court in Prizren after the verdict. Photo: Halim Kafexholli.

Running out of the courtroom, Zylfiu fought to hold back the tears. “I feel a little relieved, but he could have been punished more, with 30 years,” he said, his voice trembling. Outside, there was outrage at the decision, with the women from Krusha raising photos of those killed and demanding a more severe punishment.

Vezire Batusha, a protestor whose husband and two sons were killed in the massacre, was unsatisfied with the court ruling. “113 were killed, and they punished him with 22 years,” she shouted. Another protester behind her yelled: “21 years of tears with 22 years of prison. Shameful.”