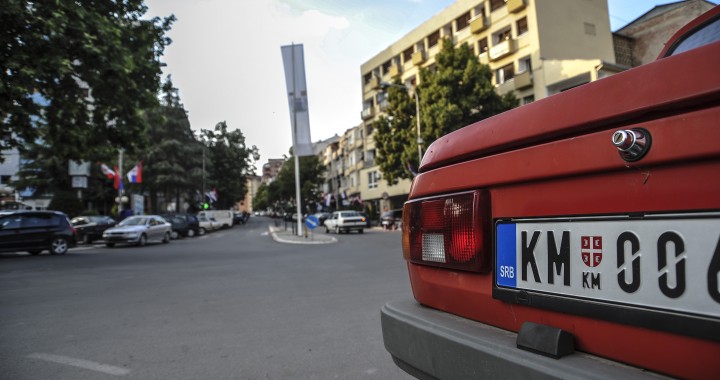 Car with Serbian license plates at the bridge of north Mitrovica. 09.06.15. Mitrovica

What do Serbs learn?

Education provided by the Government of Serbia is keeping Kosovo Serbs isolated from the rest of Kosovo.

There are approximately 20,000 Serbian students in primary and secondary schools in Kosovo, compared to some 370,000 Albanian, Roma, Ashkali, Gorani, Turkish, etc. students. In fact, the exact number of Serb students is unknown for those of us who work in Prishtina and the number given here is just an estimation extracted from OSCE Municipal Profiles in Kosovo. The exact number is known to the Ministry of Education in Serbia, who provide the curriculums and textbooks, as well as pay the teachers for Serb students in Kosovo.

Serbian teachers are paid by Kosovo institutions too. At least, some of them. The way it works is that Kosovo has a different formula for teacher/student ratio and cannot justify paying all the teachers who work in the Serbian education system in Kosovo. So Kosovo pays roughly 70 percent of the teachers, who in turn split this second salary with the remaining teachers. In the end everyone gets one full salary from Serbia and little less than a full salary from Kosovo. The Kosovo government also pays for school maintenance and other running expenses.

As you may have guessed by now, there are two parallel education systems in Kosovo: one for Kosovo Serbs and one for the rest. This has been the case since the end of the war in 1999, when the UNMIK administrator for education failed to get Albanians and Serbs in Kosovo to agree on education policy. This established parallelism was legalized in 2008 when Kosovo institutions adopted the Ahtisaari plan into its own legislation and drafted the Law on Education in the Municipalities of the Republic of Kosovo.

Now, according to the Serbian Constitution, Kosovo is still a part of Serbia, so it is no wonder that textbooks teach this as a fact. The curricula and textbooks refer to Kosovo as the “Serbian Province of Kosovo and Metohija.” They teach young Serbs that it was the Albanians who started the most recent conflicts and tell them little to nothing about the role that Serbia played in the wars that destroyed the region. They also teach them Russian as a second language and religion.

The Independent Commission was established in 2010 and issued a report which stipulated that teaching religion in public schools in Kosovo is unconstitutional as Kosovo defines itself as a secular state. It also documented all the pages in textbooks that were not in compliance with the Constitution of the Republic of Kosovo. Here is just one excerpt from their report on the History Book for Grade 8: “Albanians are referred to as a minority, whereas in reality they enjoyed the Status of nationality, according to the Constitution of Yugoslavia of 1974. The period from 1981 till 1989, and the crack-down on Albanian intellectuals and discrimination against Albanians is not represented. Unconstitutional suspension of the Autonomy of Kosovo and the annexation of Kosovo by Serbia in 1989 are not mentioned in the history book. This period and the demonstrations of 1989 are represented with one inappropriate sentence, ‘as a reaction to constitutional changes in Serbia.’” Similar issues were found in Geography, Music and Literature textbooks.

Why does this matter? Well, because it is 2016 and none of the issues exposed by the Independent Commission were ever addressed. It is now 17 years after the war and Serbs in Kosovo are more isolated than ever, trapped in a false narrative fed to them by Serbia. There is a whole generation of young Serbs who live in Kosovo but think that Kosovo is still Serbia, speak not a word of Albanian and do not have the skills to participate in the economic and social life in Kosovo.

Since 2011, the EU has engaged Kosovo and Serbia in a dialogue with the goal to finally integrate Kosovo Serbs in Kosovo and get Serbia to eventually recognize the Republic of Kosovo. However the actual results could not be further away from this initial goal. The dialogue produced a Community/Association of Serb Municipalities which risks creating an institution with executive powers only for the Serbs in Kosovo, linking them even more firmly to Belgrade and alienating them further from the rest of Kosovo. (This is also not in line with the Kosovo Constitution, but few in the EU seem to care about it.)

The “sacred” concept of multi-ethnicity in Kosovo, which the EU so strongly promotes, seems to apply to the Albanians, Turks, Gorani, Roma, Ashkali, Egyptian and other communities in Kosovo. But not to the Serbs.

Serbia must loosen its grip on Kosovo Serbs. The EU must make sure that Kosovo Serbs are not used by Belgrade to reach Serbia’s political goal of controlling Kosovo through institutions like the Community of Serb Municipalities, which do not address the real needs of the Kosovo Serbs. Kosovo Serbs have the right to learn the truth about their own country – Kosovo – learn Albanian as a second language, participate in the social and economic life in Kosovo. If Serbia is still to provide education for Kosovo Serbs, it should make sure it fulfills those rights.

Kosovo must take measures to stop the use of derogatory and inflammatory parts of the Serbian language textbooks in Kosovo by urgently establishing another Independent Commission. The Commission must see if the books have changed at all in the last six years since the publication of the last report and demand the removal of textbook pages and chapters that are offensive or not in line with the concepts enshrined in the Constitution of the Republic of Kosovo.

Kosovo must also urgently begin a dialogue with Kosovo Serbs about Education, Economic Development, Employment and Security in Kosovo. This dialogue must involve a much wider circle of people than just the Belgrade-controlled representatives in the parliament who come from Srpska Lista. Kosovo Serbs are citizens of the Republic of Kosovo and they should be encouraged to take active part in shaping policies in the country where they live. This must include an education policy that should prepare them for life in Kosovo.

The EU has a role here too. Can we talk education? Why has this not been of anyone’s concern for the five years that this dialogue took place? How will Kosovo Serbs ever truly integrate in Kosovo if all that the dialogue with Serbia has produced is ethnically divided institutions that will make sure communities in Kosovo are further disintegrated? The EU must support a better and a more just dialogue that produces long term solutions that address the needs of people living in Kosovo, be they Serb or Albanian.