When a monster jests

Review: A musical about Slobodan Milosevic and his wife Mira dresses the ‘Butcher of Balkans’ in jester’s attire – but the tricks at play are neither innocent nor new.

Considering Slobodan Milosevic earned a nickname as ‘the Butcher of the Balkans’ and was accused of war crimes at the Hague, one rightly wonders if a play about him would be about the making of a monster, or, perhaps, an attempt to redeem him and justify his actions as mere circumstances of fate.

In effect, “Lift: The Slobodan Show,” a Serbian-language play about the former president of Serbia and Yugoslavia, his wife Mira Markovic, and their children, does neither. Instead, it dresses the monster in a clown’s suit, but seemingly without much purpose, beyond the fact that such a thing can be done now since Milosevic is not in power and is long dead. But he was successfully mocked already back in back in 1996-97, when protesters opposing Milosevic and his clique of ruling sycophants made fun of them in satirical plays.

“Lift: The Slobodan Show,” written by Jelena Bogavac and directed by Nenad Todorovic, begins with a musical recounting of some highlights from the life of Slobodan and his wife Mira. This is mockingly done by imitating the old communist songs that praise early successes of leaders, implying that they were always destined for greatness, even from a young age. These lines, as if straight from their CVs, are sung by actors in familiar ‘90s tracksuits in green and purple, glittery gold, and other neon palettes symbolic of the era. The songs alternate, sometimes abruptly, between intense techno-dance beats and turbo-folk.

This format of biographical snippets from Slobo’s and Mira’s lives is maintained throughout the show. But it rarely goes beyond that. It is never quite clear what exactly the play is about. It shifts focus so much, that first you think it is about Slobo, then about Mira, then about their love and family life, and then when you finally think it will cover tyranny, atrocities, subjugation, and war crimes, the play barely glances over them and focuses instead on quotidian scenes of the (dictator’s) court life: how Marko, mommy and daddy’s little prince, organizes his drug-induced parties, or how Marija, the spoiled princess, has fits of rage about trivial things.

What is never mentioned is the suffering that Milosevic brought to other places and other peoples. References to Croatia, Bosnia, or the situation of Albanians in Kosovo at the time is barely mentioned. And without them, the audience fails to see an important dark side of Milosevic, without which his character becomes just a cartoon.

One would think that the play would spend more time with the important events that gave rise to and shaped the monster. The episode such as the 1987 speech — with those famous words “no one will dare beat you anymore,” which, it could be claimed, portrayed Serbs as victims and provided him with a casus belli much in the same way as Hitler’s propaganda fabricated the persecution of Germans to justify invading Poland in 1939 — was barely glanced upon in what seemed like 30 seconds or less.

What we do get, though, is an episode about Mira’s mother, Vera — as if to give us a deeper glimpse of Mira’s character — who during World War II was a partisan fighting in the woods, was captured by the Gestapo, tortured, and ultimately shot. But how this scene fits with the overall play is a bit vague, unless your crazy brain forms a probably nonexistent connection and makes a parallel between Gestapo and the Serbian police repression of Albanians in Kosovo in the ‘90s. 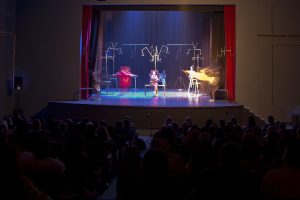 You will neither find much of Mira in a Lady Macbeth-like character nor in an imitation of House of Cards as part of Serbdom’s power couple, despite her undeniable role beside Milosevic, as well as her political party, JUL, which was always in coalition with Milosevic’s SPS. What you will see is a set of scenes in which she reminisces on the homes they changed throughout the years. These houses got bigger and bigger, and could either stand for the ‘power couple’s’ ever-increasing political cravings, or, perhaps, for Serbia’s territorial appetites. In one of the last scenes, after Milosevic is extradited to the Hague, the house is presented as empty and desolate.

At one point, instead of focusing on Slobo as the monster, the attention is shifted towards demonizing NATO for bombing Yugoslavia during the Kosovo war, entirely bypassing the reason why such a thing was done. The foreign press is presented as propaganda, as if the killings of Albanians, ethnic cleansing, and the exodus of people to Albania and Macedonia were mere fabrications, as if the Serbian Radio Television, RTS, was the only true source of ‘real’ news.

These scenes, of course, shift the entire blame from the disease to the symptoms, rather than holding Milosevic responsible for the state of affairs. They only perpetuate conspiracy theories, the feeling of victimization, and injustice against Serbs, and, in fact, detract from the root of the problem — that it was Milosevic and his actions that brought all that suffering to Serbia. It is as if somehow things are inseparable: if you hate Slobo, then you must be pro-bombing, as if you cannot separate the two. And in fact that is the brilliance of Slobo’s propaganda machine, and its success in action, as seen in how deeply it penetrated people’s psyches, and how his ghost looms over them even long after his death.

The play is definitely not the Serbian version of “Hamilton.” It suffers from lack of focus, and it fails short because of intrinsic biases. One also gets the feeling that the play is afraid to delve into and explore Milosevic’s monstrous side. Instead it turns into something as if conjured by a student of Joseph Goebbels, who perhaps repented, yet is conflicted, or confused, to truly move forward, haunted by Slobo’s ghost and the demons he left behind.

The play ends with testimonials of true stories from the actors, mainly about the events unfolding during the 1999 bombing of Yugoslavia by NATO. It is emotional, but it feels extraneous, because we don’t really see Slobo as the villain, but as a king playing the jester’s role. Without confronting the atrocities, crimes, injustices, tyranny, and all of Milosevic’s other misdeeds, there is nothing to link him to and balance the true stories provided by the actors at the end of the play — except for the funny little episodes that, at the end of the day, make Slobo look like not such a bad guy.

In one of these testimonials, one of the actors who was too young to remember the Milosevic reign lists vivid descriptions from his childhood, and then says, “I didn’t know him. I didn’t watch his trial on TV from the Hague. I was too young and didn’t give a damn. I didn’t understand why was there so much commotion about something so boring as a trial.” He is of a post-Slobo generation acting in a play about Slobo. And it is people like him that need a play to do what plays do best. It is important that Slobodan Milosevic’s figure is not whitewashed, misrepresented as merely a silly clown instead of the devil that he was. Otherwise, the people will again be sucked into the vortex of mythology, glory, and nationalism that, as we have seen in the Balkans, always lead to suffering, misery, wars, and death.

Just as theater was instrumental to democracy in ancient Greece, so it must serve the same purpose in the Balkans. If one fears, or deliberately decides to omit, the ugly stuff, then, my friends, it becomes nothing more than propaganda. And we saw, in real life and in the scenes throughout the play, how skilled Slobo was at pushing the “official party line” for his dictatorial goals. We have to make sure the young generations don’t fall for the same lies and tricks.

“Lift: The Slobodan Show” premiered on March 6 at the Culture Center in Gracanica. It will play in Belgrade on March 18 at the National Theater.

by Lekë Muqaj
Next: News