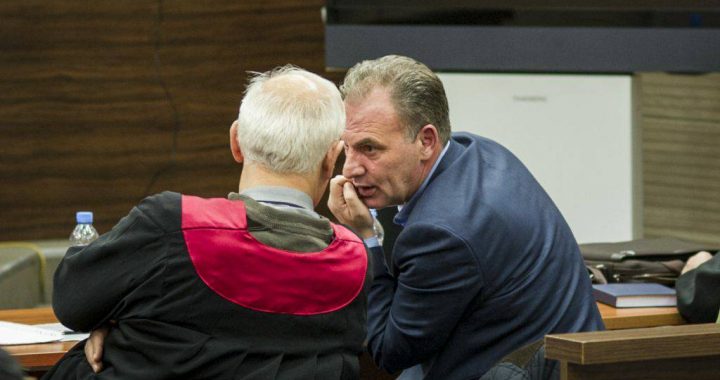 Fatmir Limaj in a separate trial, for corruption charges, for which he was acquitted in November 2017. | Photo: Atdhe Mulla.

The Basic Court of Gjakova acquits Fatmir Limaj, politician and former KLA commander, of charges regarding the war-time deaths of two civilians in Bellanica.

Almost one year and a half after being indicted for war crimes, politician and former Kosovo Liberation Army, KLA, commander Fatmir Limaj was acquitted of war crimes charges regarding two the deaths of civilians Selman Binishi and Ramiz Hoxha during the Kosovo war in 1998. Nikolle Komani, judge at the Basic Court of Gjakova, read the verdict on Friday morning, saying that the prosecution was unable to prove that Limaj was responsible for the crime.

“Elements of a criminal act were not proven and the defendant Fatmir Limaj is acquitted of the charges,” Komani said.

The indictment against Limaj claimed that he did not act to stop the murder of Selman Binishi and Ramiz Hoxha in Bellanica, a Malisheva village, in 1998. It also said that Limaj, the KLA commander of the zone in which the crime occurred, saw the bodies of the victims and was aware of the crime committed.

The trial followed testimonies by many witnesses, including KLA  leadership members such as Azem Syla, Rexhep Selimi, Jakup Krasniqi and others.

During the concluding argument by both parties on March 6, Special Prosecution prosecutor Drita Hajdari requested the court to declare Limaj guilty and sentence him under accusation of war crimes.

“Fatmir Limaj did not do anything to stop the killing of the two civilians and he did not report the crime neither as a director of the Military Police, nor as a commander of Brigade no. 121. He was a brigade commander of high authority in the area where the crime was committed and it was impossible for the defendant not to be aware of the killing that was happening,” she said.

The prosecution claimed that Limaj saw the corpses of the victims and knew of the crime, but willingly refused to undertake measures to find the perpetrators and never presented the case to the competent organs for investigation and prosecution.

In his concluding argument, Tahir Rrecaj, Limaj’s attorney, said that his defendant’s innocence was proven during the war crimes trial. He said that the trial confirmed that Hoxha and Binishi “were not killed as traitors.”

“This trial not only confirmed Mr. Limaj’s innocence but also confirmed a very important fact for the families of the victims, that Hoxha and Binishi were not killed as collaborationists and national traitors,” Rrecaj said in his final word.

He added that the prosecution cherry-picked the evidence.

“The prosecution was selective by choosing evidence that it believes will favor the indictment. This goes against the principle of fair trial and the mission of this prosecution,” Rrecaj said.

He agreed that the killing of civilians should not go unpunished, but said that the innocent should not be sentenced.

Limaj said that the prosecution knew that there was no evidence against him.

“I was convinced from the beginning that I am innocent because there was no proof, but I am also convinced that the prosecution itself knew that there was no proof and during the court sessions they were not been able to find the perpetrators and who gave the order for these acts,” he said in his concluding statement.