An exhibition of contemporary abstract and expressionist paintings by Yll Xhaferi opening this week repurposes childhood memories to reflect on the struggles of social and cultural transition and artistic isolation.

Xhaferi’s series of paintings, which draw inspiration from the artist’s childhood drawings of toys recreated in an abstract and expressionist style, will be showcased at Motrat, an exhibition space promoting young Kosovar artists, hosted by design agency Trembelat and supported by the French Alliance in Prishtina.

“I would draw as a kid without really knowing what I was doing. I still have everything I made back then,” said Xhaferi as he wandered around the small gallery. He gestured to his paintings propped against a wall, splashes of bright colour and dark chaotic lines scattered across large canvases. 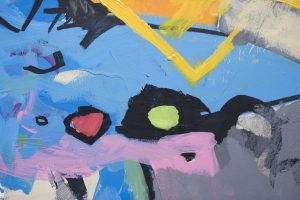 Xhaferi grew up in Prishtina in the ‘90s, during the Yugoslav wars and the Milosevic regime.

“It’s pretty ironic, I was drawing toys as a way to avoid the situation I was in as a kid, but I ended up drawing so many pictures of guns.”

The exhibition, entitled Toy Story, pokes fun at the idea of what can legitimately be called art by using childish techniques, naive themes and playful colours. But it also can be read as a protest against Kosovo artists’ cultural isolation from international artistic movements, according to Xhaferi.

Xhaferi repurposes images and memories from his childhood as a way to bear witness to the progress of social transition in Kosovo.

“I was involved in this international collaborative project in 2012 called Prishtina, Mon Amour. Young artists intervened in abandoned and dysfunctional spaces as a form of protest, an attempt to claim the spaces we didn’t have,” Xhaferi explained.

A collective of Kosovo and international artists took over the Palace of Youth, previously a sports hall that was partly burned after the 1998-99 war. 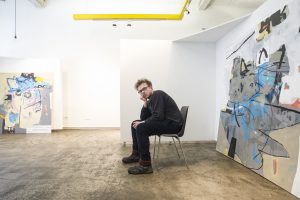 “It was a non-functional place from my childhood that represented a dysfunctional ideology. I used images I remembered from kindergarten, the uniform of pioneers during the communist regime, and painted them on the glass. It looked almost holy, like a church or a temple,” he said.

“With this current project, I’m recalling and rebuilding these memories and making them more playful. The first impression you get when you see them is that they’re funny, they’re colourful, but clearly have a darker side to them,” he explained.

“Toy Story is a way to wash away the anxiety that I built up as a child and still carry now, bringing across these memories as perhaps something more positive.”

Xhaferi uses colours of the Kosovo flag in his paintings, embodying his struggle with national identity.

“I think I represent a generation that has been constantly in transition, with no firm identity or idea of where to belong,” he said. “I find myself asking whether I need to represent some kind of political ideology or cultural identity, or can I situate myself outside of it and function independently as an artist?”

Xhaferi stressed the importance of being active through projects such as Toy Story as a way to both respond to and participate in the country’s artistic and cultural transition by creating new things visually and aesthetically. 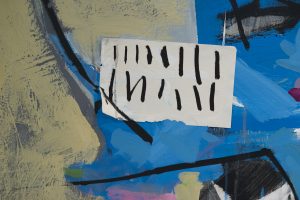 Toy Story brings important elements of historical artistic narrative, particularly abstract and expressionist forms, together with more localized themes in response to the isolation Xhaferi feels from these larger artistic movements. He commits to using local contexts in his work, while rejuvenating them using outside influences.

“In bigger countries that have had huge movements like expressionism and abstract art, people had the ability to function as free artists,” he said. “Using these larger ‘isms’ in a smaller context is a protest, a call from artists like me who are saying, ‘hey, can we be a part of these movements too?’”

Yll Xhaferi’s Toy Story opens this Thursday, March 1, at 7:00 pm at the Montrat Gallery in Prishtina. The exhibition will be on display until March 30th, Monday-Friday, 9:00 am to 6:00 pm.

by Jeta Xharra
Next: News