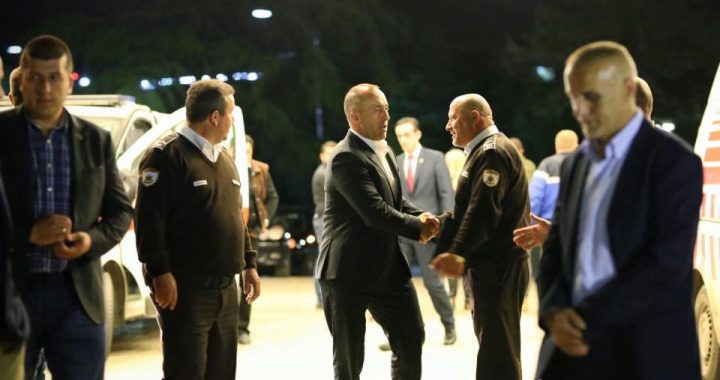 Ramush Haradinaj. | Photo courtesy of the Office of the PM.

100 days of governing by the Kanun

It is hard to imagine that the government will have better days when the first 100 days of its mandate have been accompanied with so many scandals, illegitimate decisions and a lack of accountability.

The first 100 days of the Ramush Haradinaj government, which was voted in by the Kosovo Assembly on September 10, 2017, were 100 days of loneliness. In terms of foreign policy, Haradinaj was the most isolated Prime Minister since the declaration of independence; and with 100 days of governing by the Kanun (the Code of Leke Dukagjini) in terms of domestic policy, the Haradinaj government has been characterized by arbitrary decisions and a lack of accountability.

In an interview given to local media early this week, when he was asked what he thought about the fact that one of the deputy prime ministers had festively fired a gun while sitting in the oda (men’s chamber) of another deputy prime minister, the Prime Minister declared that firing a gun in odas is a tradition written in the Kanun and that nobody was harmed. In October, in another television interview, Haradinaj declared that “there is no KLA soldier who does not own a gun without a permit, and even if you checked their cars you’d find one.” Furthermore, he even proposed to pass a bill like “one in America,” according to which all who do not carry arms would be fined 50 euros (no such law exists in the US).

At the time when the Prime Minister is making such statements, security institutions are incessantly calling for people to cease firing arms due to the risk of stray bullets. The most recent case of someone being wounded by a stray bullet occurred mid-December in Prishtina. The Kosovo Criminal Code foresees punishment up to five years in prison for those who carry guns without a permit.

I. Ramush Haradinaj got the Assembly vote to lead a government with 21 ministers and five deputy prime ministers, a new record in the history of Kosovo’s governance.

II. A few days after ministers were appointed, citizens began reporting that one of the ministers of the Haradinaj government tortured Albanians during the 1990s. While Haradinaj called these baseless accusations, only three years ago he was leading protests demanding the dismissal of Aleksandar Jablanovic, a minister in the Mustafa government, for offending the women of Gjakova who were protesting and demanding that the cases of their family members who went missing during the war to be solved.

III. Three days after he came to power, Ramush Haradinaj appointed as advisor an individual suspected of criminal ties, a person who is suspected to be connected to the kidnaping of a businessman and people who killed two police officers.

IV. On his fourth day in office and a day after media wrote about the appointment of the advisor who was suspected to have ties to crime, a Kosovo MP from AAK, one of those who the Prime Minister justified strutting around with guns without a permit, threatened to kill journalist Vehbi Kajtazi by putting a bullet in his head. The MP who made the threat was seen multiple times during the election campaign in Istog next to Prime Minister Haradinaj.

V. On his fourth day of governing, the Prime Minister offended all journalists by calling them uneducated because he did not like a journalist’s question about demarcation.

VI. On his sixth day of governing, Haradinaj completed his cabinet by appointing as an advisor an individual sentenced with nine months of parole for abuse of a fund worth one million euros.

VII. On his 13th day of governing, the Prime Minister asked the Minister of Education to dismiss the entire board of the Kosovo Accreditation Agency – an institution that licenses higher education programs. The Haradinaj Government never gave an explanation for this decision, with the exception of declaring that there had been serious irregularities in the past, but without specifying them. For the first time since its inception, the National Council for Quality Assurance had started to give positive results by refusing the accreditation of programs of both public and private institutions which did not fulfill the criteria for accreditation. Furthermore, the dismissal of the Board was illegal because only the Kosovo Assembly can replace more than one third of the Board’s members.

VIII.   At its sixth meeting, the Haradinaj Government took the decision to forgive all debt for producers of bottled water. This decision was taken in violation of the Law on Waters, which foresees that the users of the water pay for the use of natural resources, which are considered a wealth that belongs to all Kosovo citizens and not only a group of businesses. According to the assessment of the Ministry of Environment and Spatial Planning, the amount of the accumulated debts from 2008 is around 51 million euros. This is the third time since 2008 that at the outset of their mandate governments forgive the debt of businesses. As a result, many businesses and citizens have not fulfilled their obligations to the state, waiting for the next decision that would forgive their debt.

IX. In the eighth meeting of the government, the regulation for the administrative responsibilities of the Office of the Prime Ministers and the minstries was changed. Through this regulation, there’s an extra place for an advisor in every minister and up to seven extra advisors from the minority communities for the Office of the Prime Minister. After these changes, every minister has the right to appoint up to seven advisors. Meanwhile, the Prime Minister can appoint up to 19 advisors. With these changes, the number of political advisors who are paid from the public fund can go up to 196. In addition, the Prime Minister, deputy PMs, and ministers can appoint in total another 88 external advisors, who are not paid by the public fund.

X. With the excuse that his agenda is very busy, the Prime Minister canceled his participation in the Summit 100 which was held in Skopje on October 16, where all the prime ministers of the region, EU representatives, and many businesspeople from Southeastern Europe participated. But the Prime Minister’s “busy agenda” on the 16th, shows only a meeting at his office with a person who is accused by courts for intimidating regarding a bid for the Kosovo Electric Corporation, Sami Lushtaku; another meeting with the MP Milaim Zeka, who a few hours after meeting the PM was arrested for embezzling money from 920 citizens who thought he would provide theme with work permits for European countries; and another meeting with the Board of the Privatization Agency as well as attending a commemorative event.

XI. In the fifth meeting of the government, the decision to dismiss ten members of the boards of public enterprises was taken –  a demand that the Anti-Corruption Agency, AKK,  had made since February 2016 because of illegal appointments. The former government did not respect AKK’s opinion. Meanwhile, the Haradinaj government implemented the decision only partially, dismissing only ten of the 19 board members whose dismissals were requested by AKK.

XII. In addition to the selective implementation of the legal opinion of AKK, the Prime Minister also dismissed the Board of the Transmission, System and Market Operator, KOSTT. The selection of the KOSTT board members is done by the Assembly, thus their dismissal is against the law.

XIII. After two months of governing, the Haradinaj government appointed new members in the board of the Kosovo Energy Corporation, KEK. For the first time in the history of decision making, the government made a decision for appointments without publishing the names of the appointees. The names of the new members were published only a few days later after the decision was taken. Most new members were political individuals, members of parties that are part of the governing coalition

XIV. At its 13th meeting, the government decided to spend 290 thousand euros for the family members of ‘the fallen’ and the imprisoned connected to the Kumanovo conflict. In May 2015, Kosovo nationals participated in an armed conflict in the city of Kumanovo in Macedonia, in which 18 people were killed, 10 from the armed group and eight police. Most of the 37 people arrested were sentenced for terrorism. The reasons behind this conflict are not clear yet. Kosovo is one of the few countries which does recognize the Republic of Macedonia by its constitutional name. The financial support for the family members of individuals who participated in these clashes is also against the Kosovo law on prohibition of joining the armed conflicts outside state territory.

XV. After two months at the helm of the government, the 27-year-old brother-in-law of the PM was appointed head of the Fund for Health Insurance, a fund which will have the highest income after the Tax Administration and Customs. Although his appointment was not done by the government, it seems highly unlikely that his selection, without the necessary experience to manage a multi-million fund, to have been done without the Prime Minister’s intervention.

XVI. The cabinet of the Haradinaj government, like the previous governing compositions, has ignored the work of the Assembly by not participating in plenary sessions. Although recently the Prime Minister has called on ministers to attend the Assembly sessions, he himself did not participate in some of the first sessions after the government was constituted.

XVII.  For 100 days of governing, Haradinaj made four trips abroad: two to Albania and two to Brussels. For the same governing period, the three previous governments had many more high level meetings, both in visits abroad and receptions of important decision makers who visited Kosovo. The first meeting Haradinaj had in Brussels was full of tensions, which also resulted in the cancellation of a common media conference with the EU representative for the Foreign policy and Security, Federica Mogherini.

XVIII. The first decision of the Haradinaj government was the dismissal of the State Commission for the Demarcation and Maintenance of the State Border. Demarcation was the main  issue that brought the fall of the former government and a cause with which Ramush Haradinaj ran on to become a Prime Minister. The new commission appointed by the Haradinaj government presented the report and their findings in the 17th government meeting on December 4. Ramush Haradinaj, together with all the members of his cabinet, approved the draft law for the ratification of the Agreement for the state border with Montenegro, without changing even a single comma from the bill approved by the Mustafa government at the end of 2015.

It is very difficult to demand responsibility and integrity from this government, when the ethical barometer of the Prime Minister and deputy PMs that fire guns is so low. It is difficult to hold this government accountable to fulfill its objectives, when its governing program is a continuation of the activities started by the former government. It is difficult to imagine better days of governing, when in its first 100 days -which for a government are seen as auspicious – were accompanied by so many scandals, illegitimate decisions and a lack of accountability.