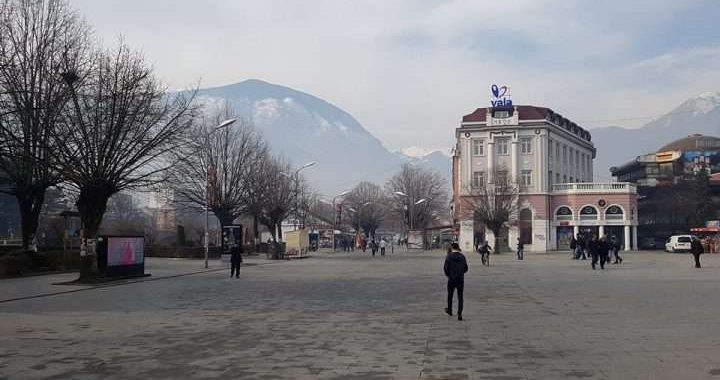 Air pollution has hit unhealthy levels in cities across Kosovo this week, even in the stereotypically ‘green’ region of Peja.

Lying in the shadow of the Accursed Mountains and sitting at the mouth of the Rugova Gorge, Peja has a reputation as a green city. However, despite its lack of industry, air pollution levels in the city have hit extremes in recent days.

On Saturday, the Air Quality Index listed Peja as Kosovo’s third most polluted city, as it recorded unhealthy levels of air pollution for the third day in a row.

Shkumbin Shala, an air quality specialist at Kosovo’s Hydro-Meteorological Institute, tells BIRN that the Institute has received a lot of questions regarding pollution levels in Peja.

Shala explains that the main causes are fumes emitted by vehicles and the use of coal to heat homes in the city. “The combustion process is not carried out with special or sophisticated equipment, and there is a lack of ventilation as well as discharges of gases and smoke,” Shala explains.

The air quality specialist adds that these factors increase levels of PM10 and PM2.5, extremely fine particulate matter which causes health issues, especially among those with breathing difficulties.

The number of people with trouble breathing in Kosovo is growing rapidly. According to data provided to BIRN by the National Institute of Public Health, in 2018 more than 10 percent of over 50s in Kosovo suffered from diseases affecting the respiratory system.

The problem is also affecting the young. Artan Ademaj, a 21-year-old who lives in Peja’s Loxhe neighbourhood tells BIRN that he sometimes faces trouble breathing. “I believe that this is a common phenomenon among residents of Peja,” he adds.

Ademaj points to ongoing construction, a lack of green spaces within the city and particularly high levels of car ownership as contributors to the air pollution in Peja.

Car use is increasing across Kosovo. Data show that in 2018, 343,000 motor and non-motor vehicles were registered in Kosovo, an increase of 2.75 per cent compared to the previous year. According to data from the Ministry of Internal Affairs, the number of unregistered vehicles, which are not required to meet emissions standards, on the roads of Kosovo totals over 148,000.

Air pollution levels in Kosovo also fluctuate due to meteorological conditions, although Shala from the Hydro-Meteorological Institute insists that man-made factors are the primary causes.

“We are experiencing lower temperatures, an increase in humidity and atmospheric pressure, and a lack of wind,” he tells BIRN. “However, we should not blame the meteorological factors only, because the human factor is the cause of air pollution.”

And air pollution has deadly consequences. While up to today, 975 residents of Kosovo have died after testing positive for the coronavirus, over 700 people die every year in Kosovo from air pollution related causes according to a World Bank report published in 2019.