Union says 23 staff at Prishtina Airport whose contracts were terminated over the last six months lost their jobs for taking part in union-led protests – a claim that the management disputes.

Last month, ‘Besa’ – not her real name – was cleaning the passenger lounge of Prishtina’s Adem Jashari International Airport when she was told to report to the manager’s office. She thought that she was being called to have her contract extended, as it was about to expire on January 31.

Instead, she was told to pack and leave. “I was told that it was my last day at work, and I had to hand over my ID card at 4pm,” she told Prishtina Insight.

For the 46-year-old mother of six, the news was shocking. Her monthly salary of 200 euros was her only income. “I started crying; the whole airport saw me, I didn’t know what to do,” she recalled.

But she was not alone. Another 22 staff in the maintenance department received the same news within the last six months.

The head of the local staff union, Bashkim Latifi, suspects that the seasonal workers’ contracts were discontinued in January because they had taken part in union-led protests over pay and conditions, which Latifi insists adhered to Kosovo’s Law on Strikes.

In August 2019, his Independent Airport Workers’ Union, IAWU, held a protest against the disparity between the pay of seasonal workers and employees on permanent contracts doing the same jobs. 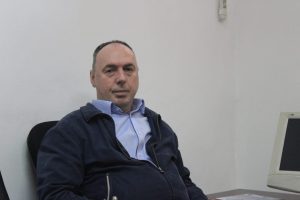 Latifi says the difference in pay is a human rights violation. According to him, this disparity was reduced after the protest, but some maintenance employees continued to be treated poorly.

Overtime and holiday pay is another issue for workers on rolling contracts. “I was only given five days off in two years of work,” said ‘Vlora,’ another employee whose contract was discontinued on January 31.

She is also concerned about taking care of her family and children. “Since January 31, both of us, my husband and I, are unemployed,” she lamented.

While Latifi accuses the management of treating airport staff like “modern slaves,” management denies the allegation.

The airport’s press office told Prishtina Insight that the decision not to renew the contracts was not an act of retaliation and was based on legal provisions in line with the Labour Law.

“All the measures taken in this case were made following the Law on Labour,” the press office stated. “It had nothing to do with the employees’ strike.”

However, Prishtina Insight has obtained a video recording that appears to show company HR telling employees to leave the IAWU. In the conversation, the voice of what appears to be an HR official is heard conveying orders from HR that employees must quit the union or face the consequences.

Valentina Gara, head of Public Relations and Complaints Handling at LIMAK, denies that management pressured workers to quit the union, calling the situation a “misinterpretation.”

“Assuming full responsibility, we will review [the video] at a managerial level and will deal with it on the basis of the internal procedures of the company,” Gara told Prishtina Insight.

Management also say they have the full support of the government in their dispute with the union, noting an alleged response from the Ministry of Labour and Social Welfare, which deemed the union demands made during last August’s protests groundless.

Prishtina Insight asked the Labour Ministry to clarify its response to the airport union’s demands, but received no answer by the time of publication. Latifi denies the ministry ruled that their demands were unfair.

‘Shyhrete,’ another airport maintenance worker whose contract was discontinued in January, says that before they were fired, many so-called seasonal workers were forced to resign from the IAWU.

“HR removed us from the union; they filled out the forms without informing us and removed us,” she claimed. “They told us, ‘You are a seasonal worker and you are wrong,’ but we had been in continuous employment for two years,” she told Prishtina Insight.

The lawyer representing the former airport employees, Shpetim Sadiku, says it is absurd for people who have worked for around two years still to be classified as “seasonal” staff.

“You can’t classify a person as having a seasonal contract if they work constantly,” he insisted. He, the staff and the union remain convinced that the workers will get their jobs back. They won’t give up, they say.

Dispute over whether due notice was given

Shyhrete also says she was not informed before January 31 that her contract would not be extended.

On the day she was fired, “The manager told me to hand over my ID card before 4pm, or they wouldn’t pay my salary,” she said, echoing Besa’s experience. 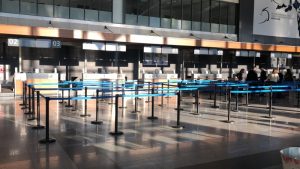 She, too, is very worried about her children, and about her mother-in-law, who she also cares for. Her husband has died, so her work at the airport was their only source of income.

Shyhrete says she is not the only one who was not informed in advance that their contract was not being renewed. “I told them that they should have told me earlier as I would have tried to find another job. Now I have no idea what to do!” she said.

She added that her maintenance manager told her that “everything was decided by the superiors.”

The Labour Law in Kosovo requires employers to give all employees on fixed-term contracts at least 30 days’ notice if they wish to terminate a contract. If an employer fails to do this, they must extend the contract, on full pay, for another 30 days at least.

Workers and the union say this did not happen. Lawyer Sadiku, who will represent the sacked staff in court, says there is no evidence that the company duly notified those employees, thus failing to comply with Paragraph 1 of Article 71 of the Law on Labour.

Prishtina Insight contacted Basri Zuka, director of Human Resources at the company – but he insisted that under LIMAK’s regulations, media communication could only take place through the Information Office.

The Information Office, meanwhile, said the termination of the contracts was in line with the Law on Labour. “All measures taken in this case have been made following the Law on Labour,” reads the reply.

Valon Leci, acting chief of the Labour Inspectorate in Kosovo, says if the airport failed to give notice that it was about to terminate a contract – and also failed to provide justification – then it broke the law. 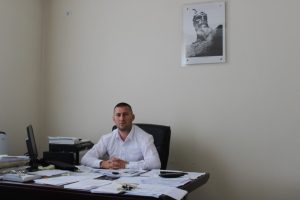 He said he believes the airport management did not comply with Article 70 of the Labour Law, which obliges the employer to justify the termination of the contract.

But IAWU chief Latifi says he has not received any real support from the Labour Inspectorate. He said the Inspectorate has “ignored the demands and complaints of the union, and, despite repeated requests since August last year, has never come to inspect the situation at Prishtina Airport.”

He added: “The Labour Inspectorate is the only body that can stop this, but it has never responded to my calls, despite having called them for six months. They only say: ‘We will come today, we will come tomorrow,’ but they never come.”

Leci disputes Latifi’s account, adding that the airport is, in fact, currently being inspected. “I believe the inspection started two or three weeks ago. But the airport is a big employer and no quick inspection can be done,” he said.

“It is not true that the airport is being inspected,” Latifi said, adding that the staff are desperate for such an inspection to occur. “The employees and I are waiting for an inspection like the ‘rain in the Sahara,’” he concluded.

The names of the employees in this article were changed on their own request.

by Ardiana Thaci Mehmeti
Next: Opinion