With 22 lives lost in the ruins of two large buildings, residents of the village of Thumane, near Durres in central Albania, are shocked and angry, remembering how they were left in dangerous homes following an earlier earthquake two years ago.

Dozens of men and women stood for hours with their eyes fixed on the collapsed buildings – the greatest tragedy the village has experienced. “Our granddaughter is still in there,” a woman said on Wednesday evening, clutching her stomach and eyes dried in tears.

Stranded pieces of roof hung from one of the buildings as efforts continued to recover the victims and survivors of the devastating earthquake that struck on November 26.

On Thursday, the Defence Ministry announced the end of the search operation, with a tragic balance sheet for this village; 22 people were found dead from white-brick ruins that turned out to be synonymous with disaster. 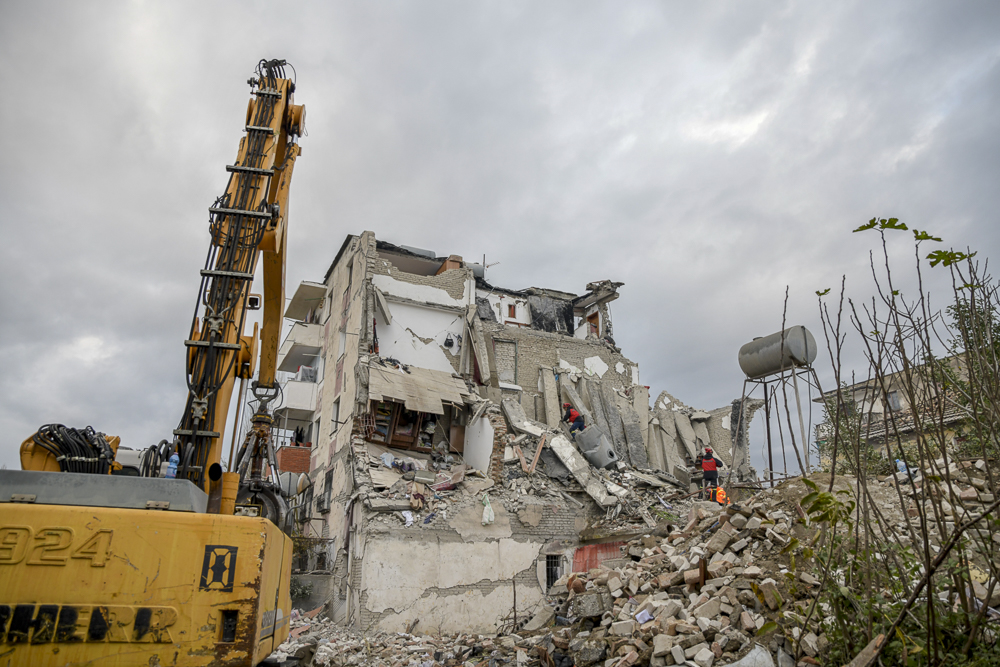 Thumane was the hardest hit point of the 6.4 magnitude earthquake, which left a total of almost 50 dead and hundreds injured in Albania. But the redbrick buildings in the village are still standing, despite the falling masonry and cracks that run through the walls from start to end. It was the white bricks turned out to be treacherous.

“They don’t hold the mortar,” observed Xhelal, a man in his sixties, as he wiped tears away. One of his friends lay dead in the ruins.

A tragedy that was foretold

The demolished buildings, along with others in the area, were built back in the mid-1980s. They are mainly grouped at the top of the village, while around them and in the field are private houses which, according to residents, have suffered less damage.

Thumane residents told BIRN that the two collapsed blocks had been checked two years ago, following another earthquake that left the residents under open skies for more than a week.

The evidence, however, is contradictory as to whether the buildings were officially deemed uninhabitable, although their condition was clearly bad.

Xhelal says the buildings were classified as uninhabitable, but people were given no other accommodation.

But Vladimir Haxhiu, who emerged from the wreckage with his family, said the buildings were deemed habitable. He insists the residents disputed that conclusion, but were turned down because they had nowhere else to go.

“We slept in a sports field for weeks, but were then told that there was no problem, that they [the blocks] were habitable,” Haxhiu recalled. “We could see they had flaws, but we had nowhere to go,” he added. 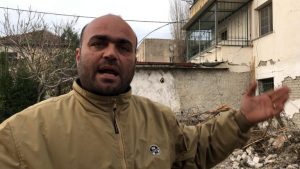 Aurel, one of the survivors of the earthquake. Photo: Vladimir Karaj.

Aureli, another survivor of the wreckage of one of the buildings in Thumane, remembers only that the building was assessed, but not how it was classified. “I don’t remember what we were told then,” he said.

Both Vladimir Haxhiu and Aureli confirmed that some of the residents abandoned the risky-looking building at the time and that, luckily, some of the apartments were empty on the day of the quake.

The dubious classification done two years ago, and the breach of promises to help with reconstruction, has left survivors of this disaster dubious about whether they will be helped this time.

In a hoarse voice, Aureli told BIRN he has lost everything. “At least if we can get some help for a house … we have nothing else, besides fatalities, and the stress,” he said nervously, seeking reassurance that he will be helped.

He said they did extra work to repair their apartments following the damage done two years ago. “On the night of the earthquake my partner was washing the tiles, so that we could put the furniture in place. Now here’s what is left,” Aureli recalled, pointing to the ruins.

Sources from the prosecution in nearby Kruja say they have not received any material or hard reports yet, but are following the situation. 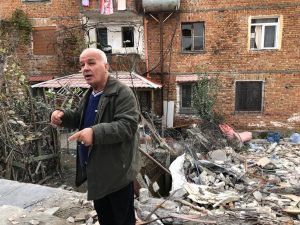 Vladimir Haxhiu, a resident of Thumane describes the moment of the earthquake. Photo: Vadimir Karaj.

The two men who emerged from the ruined building still had their night of horror in their minds. Haxhiu said that when they left the building, one of the children remained inside, so he went back inside while it was collapsing. “We came out on all fours,” he said, recalling that everything was in smoke and darkness.

Aureli is grief-stricken that he failed to convince his neighbours to leave with him after the first tremor. He remembers meeting them on the stairs and telling them to get outside. “God gave them a sign,” he recalled, but “Mother Selvia and the uncle” – as he calls them – told him they would stay at home.

He recalled that after the quake, his door was locked and would not open at first, and he even thought of jumping off the fifth-floor balcony, but soon realised that he would not survive.

Chaos and mistrust of official response

Uncertainty and fear prevail in the streets of Thumane. Death is all around as well. Dozens of people were buried on Wednesday at noon, with simple ceremonies. Coffees and receptions were held in the buildings left standing, while people were still eyeing the ruins that still held many victims inside.

A tent camp set up in the village’s sports field was constantly visited by volunteers, bringing food or clothes. But on Wednesday evening, there were still people on the roadside with no tents or shelter to move in.

At dusk, a crowd of dozens of residents gathered at the doors of the building serving as a warehouse. Many protested that they were not being given beds or mattresses. “We were given blankets, but no mattresses. We have young children,” Jamal Maksuti told BIRN.

A woman said they were angry because no one wanted to see that they had nothing in their tents. While trucks and vans full of assistance were constantly delivering food and blankets, many villagers clearly felt anxious that they would be forgotten.

Adie Sula, staying in a tent with her children, told BIRN she had received food and blankets, but four hours later she still had to stand in line, as they had neither beds nor mattresses.

The night before, Sula said, they had stayed in the backyard with only their raincoats to protect themselves from the dew. “We have animals, we have a cow and I didn’t want to leave the cow,” she said.

Despite the large presence of senior government officials, including Prime Minister Edi Rama, few villagers had been informed exactly when and how they would get tents, or where the tents would be stationed.

Former minister Eglantina Gjermeni, who was active in distributing aid to the camp, told BIRN there was an order not to set up any more tents in the field. “There is a reason for this, as the camp should not be overcrowded; a solution will be found,” she said, asked about families waiting for tents, as it started raining.

BIRN noted that two hours after their clash with officials, residents were provided with mattresses and beds and some families without tents finally received one.

Dozens of aid vehicles were unpacked in Thumane during the hours we were in the area. Vans occasionally entered the village alleyways and distributed pizzas, sandwiches, and cold snacks.

Some young people came from Tirana or other cities, offering to house the homeless. “We’ve come to help, we can provide housing,” said one girl who asked to be anonymous.

The villagers, on the other hand, were not sure they wanted to leave Thumana. “I know there are houses, but for the moment I will stay here,” Haxhiu said.

Dozens of volunteers, meanwhile, went in and out of the camp, loaded with goods, medicines, and other supplies.

An improvised canteen served warm food transported to the camp in vans. The sound of Italian and Greek could be heard on the streets of Thumana. Besides journalists from these countries, emergency aid nurses from Italy as well as soldiers from Kosovo were on hand, helping to get people out of the rubble.

There are returning migrants among the newcomers. A 50-year-old Albanian, an employee of the Catholic charity Misericordie D’Italia, says he and his son came back to help with volunteers from different cities in Italy.

Volunteers from Tirana, meanwhile, are warming the children’s hearts as well. A clown and a group of young people inside the camp have organized children’s games. In the midst of all the anxiety, and the tears, they sang ‘baby shark’ together.