With temperatures expected to drop below 0 degrees celsius this week, a snowy forecast is bringing improved levels of air quality to Prishtina and the rest of Kosovo, marking a huge difference in the air quality recorded the same time last year.

While Prishtina is sitting at 20th in the rankings for most polluted major city in the world on Monday morning, air quality levels are expected to significantly improve over the next few days.

The air quality monitors erected by the Ministry of Environment and Spatial Planning in October read Kosovo’s air quality as ‘unhealthy’ at 09:00 on Monday morning. However, wind, snow and dropping temperatures are expected to contribute to clearer air over the next few days.

Prishtina’s PM2.5 level, which refers to the concentration of particulate matter at the size of 2.5 micrograms (µg) – the most dangerous for people to breathe – was 29 µg/m³ on Monday, according to the monitors.

In December 2018, however, Prishtina residents experienced some of the worst recorded levels of air pollution that the city has ever seen. On December 3, 2018, Prishtina’s exposure to harmful pollutants in the air reached ‘hazardous’ levels, with residents expected to stay inside with windows closed, and recommended to wear masks if they needed to leave their homes.

Particulate matter that is 2.5µg in size easily enters the respiratory system and the bloodstream, making it the most harmful pollutant and those who inhale it more susceptible to cardiovascular and respiratory diseases, according to the World Health Organization, WHO.

According to Swiss air quality monitoring NGO AirVisual, air quality will bounce between ‘healthy’ and ‘moderate’ until Friday afternoon in Kosovo. According to AirVisua’s five-day weather forecast, a lack of wind and temperatures rising above five degrees celsius will accompany this increase in levels of exposure to PM 2.5.

AirVisual uses a six-marker scale of danger concerning the levels of air pollution, from ‘healthy’ to ‘hazardous,’ known as the AQI, or Air Quality Index. This index simplifies the calculation of PM2.5 concentration using an index that ranges from 0-500, and any city whose PM2.5 levels surpass 300 is considered hazardous. At 09:00, air quality across Prishtina ranged from 97 to 153 AQI.

Throughout November, PM 2.5 levels in Prishtina largely remained low enough not to put residents’ health at risk. Only two days last month saw the daily average air quality as ‘unhealthy’ on AirVisual’s scale, the rest remaining either ‘healthy’ or ‘moderate.’ 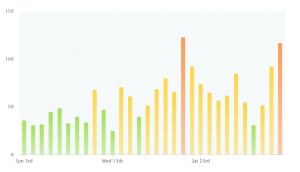 Experts have attributed the air pollution in Prishtina to the coal-based thermal power plants outside Prishtina, domestic coal and wood-based heating, fumes from car exhausts and high levels of traffic, as well as ‘temperature inversion,’ the creation of air channels at the ground level in Prishtina where harmful fumes and emissions become trapped. This is exacerbated by the lack of horizontal or vertical air channels that would normally carry this pollution away.