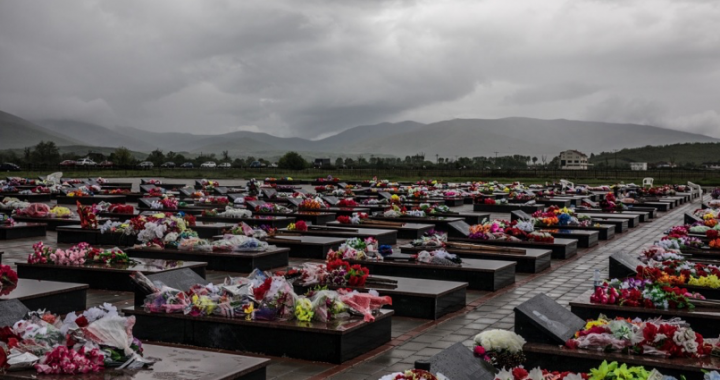 The uneven commemorative landscape of Kosovo

The commemorative landscape of Kosovo is fragmented, dominated by memorials to ‘heroes’ and ‘martyrs,’ but fails to adequately portray the stories and commemorate the tragic events experienced by innocent people and victims of the war.

On November 28, the Mayor of Gjilan erected a new statue to commemorate Agim Ramadani, a well-known commander of the Kosovo Liberation Army, KLA. Ramadani will stand next to statues of fighters from previous wars, Idriz Seferi and Mulla Idriz Gjilani, who according to the mayor, were all cast in bronze with the unbridled support of the community.

Commemorations to fallen soldiers are not enough to understand the past, and it is not enough to erect a memorial of one, two, or three individuals to represent such a significant slice of our history. The war in Kosovo is being misconstrued every day, in the most direct and visual of ways, and it is painful to watch.

I am still trying to understand the reasons behind these misconceptions. Is it ignorance? Is it a lack of professional insight on the connections between social identity, historical memory and commemoration of the past? Or is it that Kosovo is run by a macho group of former comrades-in-arms who decide at their leisure who will be commemorated and how? The commemoration that was observed in Gjilan on Albania’s Independence Day perhaps touches on all of the above.

A lesson in heroism, or sacrifice for the community, was transformed into a memorial. This effectively means that the town of Gjilan now owns new objects of cultural and historical heritage, the value of which is presumed to be shared by all members of the immediate community and society as a whole.

A reminder is necessary at this stage: these sites are public spaces, they are not owned or maintained by a separate individual or group, either religious or political. However, the question still needs to be asked: in reality, who is it that owns and manages them?

Earlier in November, I was lecturing at the Faculty of Law in Prishtina on Atrocities Heritage, and I asked the students “Who decides what is to be commemorated and why? What does that mean for the peace-building process in Kosovo, and the ways in which the past is being interpreted?” Just by asking such a question, it dawned on my students who really has control over what is to be commemorated and how.

Theoretically, the authority that decides how and why parts of certain history are to be commemorated and turned into heritage are those who possess influence on the policy process at the national level. However, turning a place into a commemorative heritage site comes with the responsibility to manage and preserve it correctly. Preserving and managing a commemorative site is a cultural process in itself, imbued with value and meaning.

Let us go back in time for a moment. During the 1988-1999 Kosovo war, some 10,800 ethnic Albanians were murdered, among them innocent people, women and children. These atrocities were imposed on the entire population of Kosovo, throughout the territory and in a systematic manner. As the conflict drew to a close and Belgrade was losing control, thousands of bodies of innocent victims were dumped into various trucks and ended up in mass grave sites around Serbia. Now, over 20 years after the conclusion of the war, the commemorative landscape in Kosovo lacks any reference to these atrocities, which face the threat of disappearance from the public conscience.

The word monument, deriving from both Greek and Latin, means to remind, warn or advise. With this in mind, when a site is transformed into a commemorative site, it becomes a symbol for the society that it represents. The site exists with the intention to warn, advise or remind future generations of the events that happened in the past and those that should be avoided in the future.

In Kosovo, the commemoration of the past took two turns. The first is this official ‘overnight’ initiative, the one that glorifies fighters by placing statues in public spaces, which has dominated the commemorative post-war narrative.

However, the second turn was one taken by individuals:  a mother’s campaign to find the remains of her sole son (Nesrete Kumnova); a community remembering the victims whose remains have been found in a mass grave; a pizzeria owner preserving his property which was the site of a massacre (Suhareka);  a lone woman’s effort to turn her family home into a museum to preserve the memory and the belongings of her husband and her four sons, two of them found in a mass grave site (Ferdonije Qerkezi). Kosovo has seen many similar forms of preserving collective memory, through exhibitions or individual preservation of artefacts.

But if these statues in public spaces continue to overshadow the commemorative landscape of Kosovo, the violence and the pain that innocent people have undergone will never truly be reflected. Seeing the numerous statues of fighters does not provide people who live around them with a complete picture of the story they are intended to memorialize. Rather, it gives the impression that this was a sort of glorious war, an affair between two fighting groups, that of Serb forces and the KLA, when this remains only one part of the story.

In March 1998, I drove to Prekaz with a few Spanish journalists just four hours after Serb forces had withdrawn. An attack on several families had occurred, directed with precise intention towards women and children who were alone inside their homes, not on a battlefield.

Today, at the commemorative site in Prekaz, the stamp of the Kosovo Liberation Army can be seen everywhere, especially next to pictures portraying Adem Jashari. His family home is preserved as his operation center, his motorbike has a special spot on the second floor of the National Museum of Kosovo.

However, if we look at the bigger picture, this site does not reflect the painful history of the Jashari family. It does, however, give the impression that a heroic battle was undertaken at that site by the legendary commander. I am not sure how this can properly serve as a reminder, warning or advice to future generations when what happened in Prekaz is only partially reflected by the memorial.

The commemorative landscape of Kosovo is often fragmented in this way, and does not portray the tragic events that innocent people were exposed to or were victims of. For example, most of the sites where massacres took place are not marked in any way, they are known only to researchers like myself who are chasing the past and those who were directly affected and are forever scarred by what happened there.

Statues are not the only type of commemorative sites preserved and managed by public institutions, of course, but other official efforts at commemoration have also fallen short. Several sites have been marked in the form of uniform graveyards, often with victims represented by identical stones, all one size. These square, marble graveyards are intended to mark the deaths of elderly men, women and children, and the graveyard in Gjakova, for example, has several empty graves awaiting the remains of missing people to be returned from mass graves in Serbia. However, those that the graveyard is commemorating will never be known to a random visitor because the plaque that those paying their respects will see upon entry refers only to ‘martyrs of the nation.’

It is hard to connect with the painful legacies represented by these sites when there is no sign or description of the events that took place. These were innocent individuals who were taken from their homes, but often they are portrayed as ‘martyrs’ and ‘heroes,’ not as victims of a brutal regime that aimed to exterminate a group of people due to their ethnicity. One will surely have sympathy when faced with such a visual depiction of the large number of victims lying in these graveyards, but the truth cuts even deeper.

We should be cautious about the use of public spaces to commemorate the past. A society that has lived through violence and atrocities is left with both physical devastation and personal and collective traumatic experiences, both of which shape social identity and culture. Documenting the events of the past through memorials, oral histories and graveyards becomes an integral aspect of dealing with the past. It sparks potential for the healing process to begin and for questioning the past.

The current dominant forms of dedication to the past create confusion, and in the worst case, actually jeopardize our understanding of what happened. One thing is for sure, if the truth continues to be played with in this way, it is we, the people who hold the scars of war, that will feel the consequences the most.

The opinions expressed in the opinion section are those of the author only and do not necessarily reflect the views of BIRN.

Nora Weller is a scholar on atrocities heritage and cultural heritage protection. She is based at the University of Cambridge, UK.