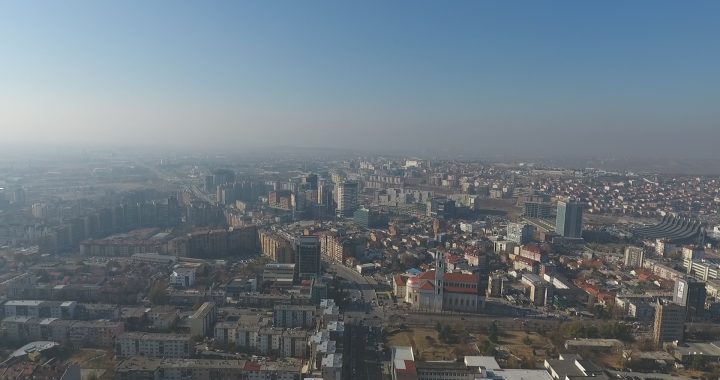 A report from air quality monitoring NGO AirVisual published on Wednesday ranked Prishtina as the 18th most polluted capital city recorded in 2018.

A number of places in the Balkans were ranked high on AirVisual’s lists. Capital cities Sarajevo and Skopje both suffered from higher average annual air pollution than Prishtina, recorded as the 14th and 16th most polluted capital cities in 2018. Bosnia and Herzegovina was listed at 14th and North Macedonia as 16th on the country rankings, with Bulgaria (24th), Serbia (28th) and Croatia (30th) also making their way onto the list.

The report outlines some of the main causes of the problematic levels of air pollution in the Balkans. “Transportation, agricultural emissions which travel distances to impact cities and industrial emissions are all common contributors across different areas,” the report reads. “Residential heating is an important factor in Eastern European countries.”

The world rankings focus on the levels of particulate matter in the air at 2.5 microns in size, known as PM2.5, which is widely regarded as the pollutant with the most damaging impact on human health of all commonly measured air pollutants. The microscopic size of PM2.5 particles makes it easy for them to penetrate and damage the lungs, the report explains.

While Prishtina appears high on the list of most polluted capital cities, it is much lower in the list of all the cities in the world that were recorded, at 371. This low ranking is largely a result of the high numbers of affected cities across China and India – 89 per cent of cities on China’s mainland exceeded the rates indicated by the WHO’s guidelines for healthy air pollution levels.

AirVisual noted throughout the report that much of their data is reliant on private and non-governmental monitoring of air quality, with some of the most polluted locations in the world providing no monitoring whatsoever. Entire areas such as Africa and parts of Southeast Asia are missing crucial data and monitoring of air quality, which is concerning given the escalating levels of urbanization these regions are affected by, according to the report.

The outgoing Minister of Environment and Spatial Planning, Fatmir Matoshi, has taken measures to raise awareness of the levels of air pollution in Prishtina, introducing screens across the city center that inform the public in real time about the levels of air quality in the city at the end of October.

The AirVisual report stresses the importance of continuous and reliable monitoring of pollution levels.

“Real-time, public air quality information is essential not only to empower populations to respond to current conditions and protect human health, but also is a cornerstone in generating public awareness and driving action to combat air pollution in the long-term,” the report reads. “More monitoring is needed in large parts of the world without access to this information.”

Kosovo’s annual average PM2.5 emission level sits at 30.4 micrograms per square meter, or ‘moderate’ on AirVisual’s Air Quality Index, or AQI. The index indicates the danger of the levels of PM2.5 emissions on a scale of 0-500, ranging from ‘healthy’ to ‘hazardous.’

The country suffers from concentrated exposure to high levels of PM2.5 during autumn and winter months, and has already reached levels higher than 182 micrograms per square meter (‘hazardous’) at the end of October. However, Kosovo’s air remains fairly clear during the rest of the year.

Other than staying indoors, reducing outdoor exercise and keeping windows closed for protection, the report suggested a number of personal choices that can have a significant impact on reducing pollution emissions.

“Choosing clean modes of transport (cycling, walking, public transport where available), lowering household energy usage and personal waste output, and supporting local air quality initiatives can all positively impact the air quality in our communities and on our planet,” the report concludes.