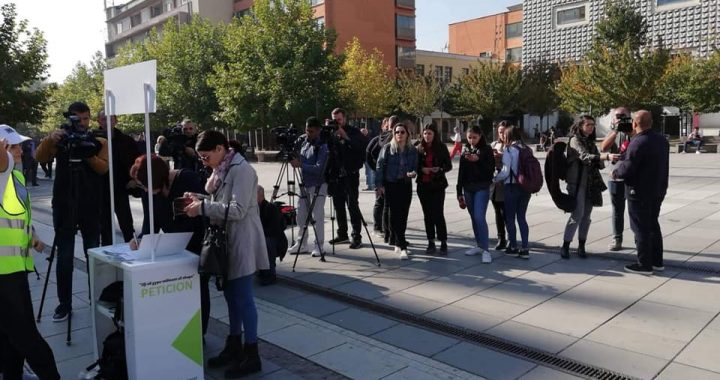 The Coalition for the Protection of the Environment launched their petition to halt hydropower construction on Tuesday. Photo: Kosovo Democratic Institute.

NGOs call for halt to hydropower

After violence broke out at a demonstration against the construction of a hydropower plant in the Municipality of Strpce earlier this month, a coalition of civil society organizations have launched a petition calling for a halt to power plant construction and sought an investigation into the actions of the police.

On Tuesday, a coalition of civil society organizations launched a petition in support of the wave of protests against the construction of hydropower plants in the Municipality of Strpce. One such protest on October 8 ended in violence against demonstrators, some of whom were children, with the Kosovo police using pepper spray.

The petition is directed at the incoming Kosovo Assembly and Government, and demands an immediate halt to the construction of numerous small-scale hydropower plants on Kosovo’s rivers. Volunteers collecting signatures in support of the ongoing petition faced threats in Prizren on Wednesday. An unidentified individual damaged a display giving details of the petition in the city’s Shadervan Square, and ordered the volunteers to leave.

Diana Metushi, project manager at the Kosovo Democratic Institute, KDI, one of the organizations that authored the petition, told Prishtina Insight that all previous campaigns against the damage done to the rivers had fallen on deaf ears until the media storm that followed the October 8 protests in the village of Biti.

“One petition was started by the inhabitants of the town of Strpce and one by the inhabitants of Bitija e Poshtme,” said Metushi. “They were initiated by the citizens themselves and were completely ignored by both local and central government. The citizens of this municipality have held over 200 protests since 2015 but their voices mostly went unheard or ignored by the government.”

Four hydropower plants have been planned in the municipality, including two in the territory of the Sharri National Park, one in a populated area in the town of Strpce, and one in Biti, where there are hundreds of fields, raising fears of serious losses to Kosovo’s agricultultural sector because of the lack of water resources in the surrounding areas.

Metushi warned that past mistakes related to hydropower construction are likely to be repeated if the incoming government does not take action. “We are still not aware of all the consequences as no scientific research has been done to evaluate the damage,” she explained. “However, when the plant in Decan was completed, two wells supplying water to the Municipality of Decan were drained.”

According to Metushi, this could have bigger consequences in Strpce due to the proximity of proposed hydropower plants to villages and the Sharri National Park. “The case in Strpce is even more sensitive. Taking into consideration the loss of underground water in Decan, it is only logical to assume there shall be consequences in the Lepenc territory, especially for the agricultural fields,” she said

Demanding a moratorium on hydropower construction

The petition demands a halt and subsequent radical reform of the process by which hydropower plant construction may be conducted. This includes a moratorium put in place on issuing construction permits for all mini hydropower plants until an “integrated study based on accurate data on water resources in Kosovo” is undertaken, and the creation of a plan to restrict both the construction of hydropower plants in certain areas and other projects which would have a damaging impact on Kosovo’s rivers.

A moratorium on the construction of hydropower plants was previously put in place by former Minister of Environment and Spatial Planning, Albena Reshitaj, who pledged in April 2018 that no more construction would take place until a comprehensive study of Kosovo’s available water resources was carried out.

According to Reshitaj, the last completed study was conducted in the early 1980s. However, Reshitaj resigned before a new study was ever completed. In September, outgoing environment minister Fatmir Matoshi lifted this moratorium, giving the green light to companies to go ahead with construction.

Diana Metushi from KDI expressed hope that things will change with a Vetevendosje-led government making decisions, as the party have expressed support for implementing measures for the protection of the environment.

Vetevendosje MP candidates Yll Rugova and Hajrullah Ceku attended a protest in Biti on October 11. “It’s over when private interests are put above the public interest, and all those who damage nature will answer to the law. Damaging nature is a criminal act,” Ceku said at the protest.

Metushi spoke of her despondence at the violent scenes three days earlier at the October 8 protest, as she explained how force was used by Kosovo Police to disperse the protesters. “When we arrived, citizens were waiting in line to be treated at the local medical center, and the image was terrifying: children crying, mothers and fathers being treated by an overloaded and over stressed medical team… I felt true sadness witnessing something like that in the 21st century.”

KDI has been in contact with the Kosovo Police Inspectorate, the Kosovo Ombudsperson and the Department for Children’s Rights, imploring that these institutions investigate the violence against protesters.

Two women were arrested following the demonstrations in Biti, both of whom carried visible signs of excessive force. While both were released immediately after questioning according to the Kosovo Police, Metushi said KDI ensured they reported the police’s behavior. “We also held presence when they gave their statements, to ensure police didn’t put any social or psychological pressure on them to change their statements,” said Metushi.

In the meantime, civil society organizations have organized numerous activities to stand in solidarity with the citizens who continue to protest. According to Metushi, no force has been used at any protest since October 10, despite demonstrations occurring on a regular basis.