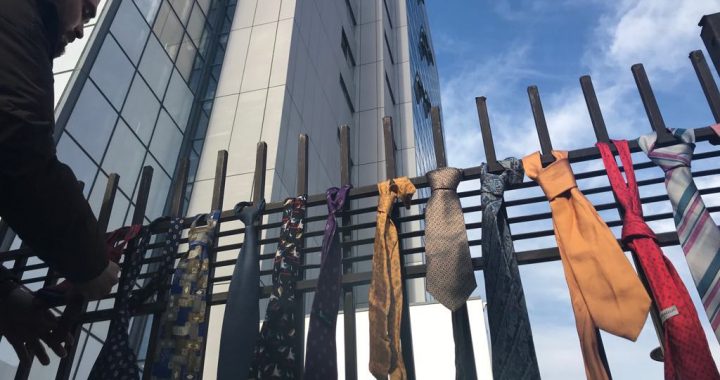 Kushtrim Mehmeti, one of the organizers of the ‘humanitarian action’ to ‘aid the Prime Minister’, places donated ties on the government fence. Mehmeti and his organization collected about 300 ties, in a humorous bid to ‘aid’ PM Ramush Haradinaj, who said he gave himself a salary raise because he has to purchase “ties and shirts.” “Don’t worry PM,” Mehmeti said. “If you need ties and shirts, we will provide them.” | Photo: Die Morina BIRN.

As Kosovo waits for the final outcome of the October 6 elections, political analysts give insight into the next steps a prospective Vetevendosje-LDK governing coalition should take to reduce waste and increase productivity across Kosovo’s ministries.

During the electoral campaign for Kosovo’s October 6 elections, Vetevendosje and the Democratic League of Kosovo, LDK, were the only two parties that signed a memorandum of understanding pledging to follow principles of good governance with the NGO Democracy Plus.

As part of the agreement, prime ministerial candidates for Vetevendosje, Albin Kurti, and LDK, Vjosa Osmani, promised to reduce the number of government ministries from 21 to 15, as a sign of good governance.

During the prime ministerial debates organized by BIRN prior to the October 6 elections, Kurti and Osmani promised an even greater reduction of ministries within their cabinet. Both candidates promised to make further cuts, reducing the executive to only 12 ministries.

BIRN contacted both Vetevendosje and LDK, but have not yet received a response concerning their future plans on how the executive branch would be restructured. Both parties have been holding meetings over the last week in the hopes of signing a coalition agreement.

The former government was heavily criticized during its tenure for the inflation of the number of ministries, which reached 21, and deputy ministers, which surpassed 80, along with other surplus staff hired during the mandate of the previous executive body.

In comparison, the previous government in power from 2014 to 2017 employed only 40 deputy ministers, meaning formed prime minister Ramush Haradinaj doubled the number of deputy ministers, and more than doubled the expense to Kosovo’s state budget through hiring extra advisers and administrative staff.

Experts from Kosovo’s civil society organizations have been insisting that significant reductions to the human resources in Kosovo’s government ministries be carried out, not only to save money but also to improve the efficiency of the functioning of Kosovo’s executive.

Artan Demhasaj, the executive director of anti-corruption and good governance NGO Cohu, views reducing the number of ministries and deputy ministers as a positive step. “Kosovo, a country with 1.8 million inhabitants, does not need such a huge cabinet,” said Demhasaj. For Demhasaj, where there are overlaps in the competences of different ministries, it makes it difficult to discover who is responsible for what, and who should be held accountable for omissions and mistakes made.

“It is good for each field to have a single minister, then both the damage and achievements can be attributed [to one minister],” Demhasaj added.

Jetmir Bakija from the good governance NGO Democracy Plus agrees, insisting that merging the ministries would contribute to savings in the budget, as well as better coordination between executive branches.

“We have observed that one of the biggest challenges of former governments has been coordination in the programs and strategies,” Bakija said.

In terms of how the new look executive could shape up, Blerim Vela, a political analyst and PhD candidate at the University of Sussex, provided suggestions for the ministerial reshuffling to BIRN.

Vela told BIRN that the reduction of the government’s human resources needs to be followed by a clear policy to ensure the effective functioning of the ministries that will find themselves with new capacities.

“The new government needs to find solutions and find workplaces for those officials that would be affected by such a policy,” he said to BIRN. According to him, this could be done by limiting new employment until the first government reshuffle is completed and those who would lose their jobs are accommodated for. Another suggestion from Vela was to provide early retirement for those over the age of 55.

With Vetevendosje and LDK in the process of discussing the formation of the new government, which may be completed as early as the next few weeks, it seems as though reshuffling and reducing the government’s executive branch is on the agenda in these talks, at least according to Kurti. “We started these talks with the idea to form a more efficient government and a stronger state,” the Vetevendosje leader said on Thursday.