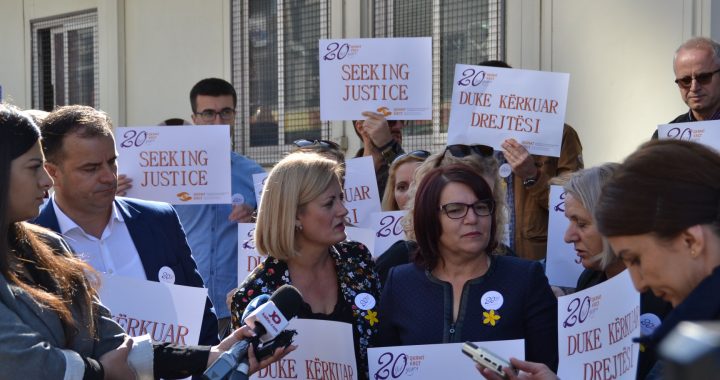 On Monday, Shyhrete Tahiri-Sylejmani announced that she has filed testimony detailing sexual violence perpetrated against her during the Kosovo war, in order to seek justice and encourage other survivors to follow her lead.

Shyhrete Tahiri-Sylejmani, a woman from Gjilan, announced on Monday that she has filed testimony detailing wartime sexual violence that was perpetrated against her to the Office of the Special Prosecution in Kosovo as part of an ongoing investigation.

Accompanied by Feride Rushiti, the head of the Kosova Rehabilitation Center for Torture Victims, KRCT, Tahiri-Sylejmani briefly gave thanks for the support she has recieved. “I am here with you to share my heartache and give courage to all those that suffer like me,” she said. “It is not at all easy to share the pain that breaks your heart. I am here to demand justice.”

According to Rushiti, Tahiri-Sylejmani’s public announcement is intended to increase public support for survivors of wartime sexual violence and battle the impunity afforded to its perpetrators.

“Today, 20 years after liberation, not a single person has been sentenced [in the Kosovo courts] for this war crime,” Rushiti said. “Thus, today, by submitting the story of Shyhrete Tahiri, we intend to mobilize women and men to demand justice for the crimes committed. We demand that insitutions make it a priority, as without justice there is no peace for wartime rape survivors.”

KRCT have also stated that Tahiri-Sylejmani’s testimony is part of an investigation that is already underway, and, as a result, the details shall not be made public.

According to Amnesty International, Kosovo’s judicial system has never successfully convicted any individual for wartime sexual violence. While three individuals have been prosecuted in Kosovo, each conviction has been overturned on appeal, with the courts concluding that it was impossible to verify the identities of the accused beyond reasonable doubt.

Vasfije Krasniqi-Goodman was another survivor in Kosovo to publicly share her story of wartime sexual violence. In an interview held in October 2018, Krasniqi-Goodman recounted her experiences during the war and also the struggle of attempting to bring the perpetrators to justice.

In 2012, the Kosovo Prosecution indicted two individuals for the rape of Krasniqi-Goodman. In 2014, the Court of Appeals held that there was sufficient evidence to convict both of the accused, handing down prison sentences of 10 and 12 years to each.

However, a second appeal to Kosovo’s Supreme Court resulted in the acquittal of both men, the court deciding it was impossible to verify beyond reasonable doubt that the two accused had committed these crimes.

In April 2019, Krasniqi-Goodman testified before US Congress, appealing for Congress to support the continued investigation of war crimes and sexual violence in Kosovo. “Twenty years have passed and justice continues to fail me. My torturer has not been held accountable for his crimes, and is still at large. I will never have true peace with my past until justice is delivered.”

The number of survivors of sexual violence from the Kosovo war is unknown but the World Health Organization’s Kosovo Health Sector Situation report published in 2000 stated that: “Local organizations estimate that approximately 10,000 to 20,000 women were raped between February 1998 and June 1999.”