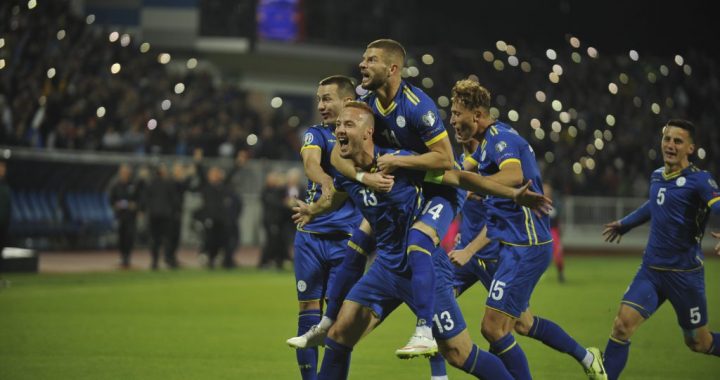 Dardanian dreams not dead yet

Kosovo comfortably beat Montenegro 2-0 on Monday night but remain in third place in the group following the Czech Republic’s surprise win against England on Friday.

Before the referee had even blown the whistle to pause the match for half time, a hearty rendition of Besa Bese, the song that is fast becoming the Kosovo football team’s unofficial anthem, was ringing out across the Fadil Vokrri stadium in Prishtina.

Kosovo were 2-0 up against Montenegro and looking comfortable, as for perhaps the first time in this remarkable qualification campaign, Kosovo did not just compete in but controlled a match.

The visitors had been restricted to just two shots from a distance, one which sailed over the crossbar and the other tipped over it by goalkeeper Arijanet Muric. Kosovo meanwhile had scored twice through Amir Rrahmani and Vedat Muriqi, and created two other excellent chances to extend their lead even further, both of which Muriqi and Milot Rashica will feel they should have taken.

While the halftime scoreline was comfortable, the opening exchanges had not been. In the first few minutes Kosovo twice conceded senseless set pieces before Muriqi was needlessly booked for squaring up to Vladimir Jovovic.

Just before Rrahmani opened the scoring in the 10th minute, ugly scenes had broken out in the area of the stadium housing the Montenegro fans, with stewards struggling to keep the two sets of supporters separated as off-field incidents threatened to overshadow the football. A ring of riot police encircled the Montenegro section for the remainder of the game.

When action resumed in the second half, more chances to widen the scoreline in Kosovo’s favor came and went. Florent Hadergjonaj, a surprise selection in the attacking right midfield position, was centimeters away from connecting with Mergim Vojvoda’s cross after Bersant Celina had split the Montenegro defence with a beautiful pass.

Less than ten minutes later Muriqi headed onto the crossbar before Celina dragged the rebound wide of the goal. Muriqi, Rashica, and Herolind Shala all shot wide before the final whistle confirmed the final score was 2-0.

Perhaps even more importantly Montenegro had few opportunities to get a goal back in the second period, restricted to just two headers which landed comfortably in Muric’s grasp. One fell to Peja-born Fatos Beciraj, who afterwards admitted that he would cheer on the country of his birth with “all of his heart” in their future matches.

This was the first clean sheet in a competitive match this year for Kosovo, who have always been able to create goal-scoring opportunities but have struggled to restrict their opponents, conceding 10 goals in five qualifiers before Monday night. That it came in Herolind Shala’s first start since March was no coincidence, the defensive midfielder received a standing ovation as he was substituted in the 82nd minute.

Before that game in March, at home Bulgaria in Prishtina, Kosovo’s campaign to qualify for Euro 2020 began with a stadium wide display encouraging the team to dream on.

At the time, qualification seemed an almost impossible aspiration for a country with a population of less than two million beginning their first ever attempt to reach a European Championship. It was a feeling only heightened after Kosovo failed to convert a positive performance into three points, drawing 1-1 with Bulgaria after dominating the game.

But more than half a year later the dream is still alive. Kosovo may still sit in third place in the group after the Czech Republic inflicted England’s first defeat in a qualifier in 10 years in Prague on Friday night, but the possibility of qualification is not gone yet, with Kosovo now just a point behind the Czechs.

Victories in Kosovo’s two remaining matches will guarantee them a top two finish in the group and a place at Euro 2020. Both matches will be played in November, with a trip to Plzen to face the Czech Republic on the 14th preceding the final match of the campaign, hosting England in Prishtina on the 17th.

Kosovo’s excellent performance in last year’s UEFA Nations League also ensures a potential second chance through a play off even if the side finish third. Georgia and Belarus are already confirmed as entering the League D play offs, while results in Group G on Sunday night mean that North Macedonia will likely also compete, and would host Kosovo in Skopje in the event that both sides require a play off.

In a press conference before the game, Kosovo head coach Bernard Challandes said he wasn’t thinking about the potential of a Nations League play off and was still entirely focussed on qualifying through the group. Milot Rashica meanwhile joked that the Czechs beating England had not changed things for the team, who had planned to win in Plzen anyway.

While qualification may still seem like a difficult task for Kosovo with the two top seeds in the group still left to play, the side’s record of three wins, two draws and just one defeat is more than anyone could have expected at this stage. The impossible still feels strangely possible.