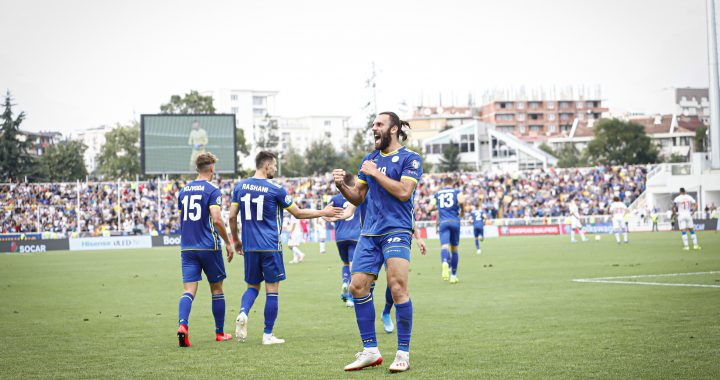 Kosovo extend their unbeaten run to 15 matches after defeating Czech Republic 2-1 in Prishtina, moving into the top two in qualification Group A for Euro 2020.

The full time whistle had blown but no one was leaving the Fadil Vokrri stadium. As the final minutes of the match ticked down, every free kick won, every catch from Kosovo goalkeeper Arijanet Muric, every shot that cleared the frame of the goal was cheered as though Kosovo had scored another goal.

The players gave a final victory lap as supporters celebrated Kosovo’s most historic victory yet, winning by two goals to one against the Czech Republic, a country that has qualified for every European Championship since it separated from Slovakia, a country that reached the final of the competition in 1996 and the semi final in 2004, a country 77 places above Kosovo in the FIFA world rankings.

While the whole team basked in the jubilant scenes, one name was sung louder than others. The three syllables of Vedat Muriqi’s surname came bellowing out of every stand, Kosovo’s lone striker the focal point of the ecstatic outpouring after the match.

He deserved every accolade. Muriqi fought belligerently to ensure Kosovo were on equal terms at half time, and intimidated the Czech defence throughout the game.

Kosovo had five key players missing from the team going into the match, with much of the focus being on the absence of attacking players Arber Zenli and Milot Rashica, who have scored more than a third of Kosovo’s goals since head coach Bernard Challandes took over in early 2018.

But as the game began, Kosovo felt its missing players more in defensive midfield. The typical defensive shield of Hekuran Kryeziu and Herolind Shala was completely absent with both players out injured, and the space left Kosovo exposed to attacks from the Czech Republic’s creative players.

Indeed, it was an attacking midfielder, Jabuk Jantko, that found himself in space on the edge of the penalty area after just 15 minutes, the Sampdoria player threading a pass through to Patrick Schick, who found room between the Kosovo defenders to score his third goal in three games and put Czech Republic a goal to the good.

With Muriqi leading the line though, Kosovo still posed a powerful threat going forward. The type of incisive attack that has become typical of Kosovo under Bernard Challandes was started and finished by Muriqi in the 20th minute, the striker angling his run perfectly to meet Elbasan Rashani’s cross and level the scores at 1-1.

Both sides had chances to take the lead before half time, but the better chances fell to the Czechs, with Muric denying Patrick Schick a second goal, and Muriqi having to work in his own penalty area to clear a dangerous free kick.

But if it was the man of the moment Muriqi that kept Kosovo in the match in the first half, it was a returning hero that won it for Kosovo in the second.

Valon Berisha, the scorer of Kosovo’s first goal in a competitive fixture against Finland three years ago, replaced Elbasan Rashani in the 51st minute, his assured presence in midfield giving a renewed purpose to Kosovo’s attacking play.

That 2-1 went on to be the final result felt like something of a miracle. Three times in the final 10 minutes the ball dropped to Czech players in the Kosovo penalty area. Amir Rrahmani made a goal line clearance, Muric saved, and Czech striker Michael Krmencik unbelievably miskicked the ball when it seemed easier to score to deny a second Czech goal.

In a frantic finish, there was still time for another header to clear the Kosovo crossbar and for Valon Berisha to be given the opportunity to add a third Kosovar goal, before the referee’s full time whistle signified Kosovo’s second consecutive victory in qualification group A, sparking jubilation.

Kosovo now face the group’s top seed, England, in Southampton on Tuesday. Speaking after the game, Challandes said that it was “a dream to beat the Czech Republic” but that didn’t guarantee that the team might not face “a nightmare in England.”

Despite hints of trepidation from the coach, Kosovo will go into the match unbeaten for over 700 days and occupying one of Group A’s top two positions, enough to make any Kosovo fan begin to dream. On Friday, Challandes spoke of the need for a “crazy game” in order to beat the Czechs. Can things get even crazier?