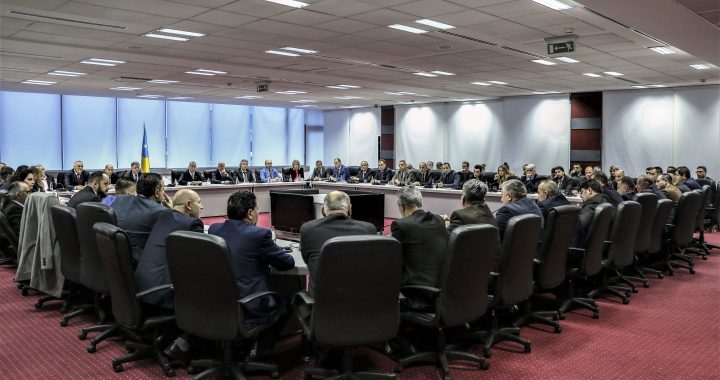 Kosovo PM Haradinaj meets with all the deputy ministers on December 28, 2017. | Photo courtesy of the Office of the Prime Minister.

As Kosovo prepares for the October 6 parliamentary elections, questions have been raised over the high number of government ministries, and whether a reduction would increase efficiency and combat waste in the state’s budget.

The start of the official election campaign on Wednesday saw some of Kosovo’s major political parties pledge to cut the number of ministries that make up the country’s executive, in order to avoid extra expenses. Kosovo’s government is currently comprised of 21 ministries, and critics have described an unnecessary proliferation of ministries which only create extra expenses that damage Kosovo’s budget.

This criticism found support among the opposition parties in the previous parliamentary mandate. Vetevendosje’s candidate for Prime Minister, Albin Kurti, has promised that in a government led by him, the number of ministries would not exceed 12, while each ministry would have only one deputy minister.

The outgoing government, comprised of the Democratic Party of Kosovo, PDK, the Alliance for the Future of Kosovo, AAK, NISMA, and the New Kosovo Alliance, AKR, has been widely criticized for increasing the number of deputy ministers to a total which surpassed 80.

A day before his resignation, outgoing Prime Minister Ramush Haradinaj appointed two more deputy ministers. This has been criticized not only by opposition parties but also civil society as a form of misuse of power, with the aim of accommodating party militants within state institutions. Each of the deputy ministers also employed staff members, from advisors to assistants and drivers, causing further expenses to Kosovo’s budget.

The Democratic League of Kosovo, LDK, has also made a promise to drastically reduce the number of ministries within Kosovo’s government. Their policy, outlined in their political manifesto for the upcoming elections, is that an LDK government would also comprise 12 ministries, with up to two deputy ministers in each.

The PDK-LDK coalition government, in power between 2015 and 2017, employed 44 deputy ministers, nearly double the number projected in the new program, while this government also faced criticism for not reorganizing the structure of the Kosovo executive, something both parties had pledged before.

It is not only opposition parties from the previous mandate calling for change. The coalition of AAK and the Social Democratic Party, PSD, is also proposing to cut the number of government ministries to 15. AAK’s Besnik Tahiri also outlined that no politician should serve as a ‘deputy prime minister’ without also being responsible for a ministry.

AAK’s former coalition partners in the previous government, PDK, NISMA and AKR have all been silent on the issue, not revealing any plans to reduce the number of ministries.

The outgoing government had proposed a draft law on the government which foresees a reduction of governmental departments. However, due to Haradinaj’s resignation, the plan remains on paper only, and could not be put before the Assembly for approval.

For Mexhide Demolli, executive director of Levizja Fol, a good governance and anti-corruption NGO, such initiatives are welcomed and reshuffling the government might bring more efficiency. “During 2018 we monitored the working program of the Government of Kosovo and only 64 per cent of the program was accomplished,” she told Prishtina Insight. “This made us realize that even though the government had many departments, the foreseen program was never  accomplished.”

None of the parties advocating change have explicitly stated which ministries will be shut down, nor the timeline for when the transition and merging of ministries will take place.

“There is a possibility to have a restructuring and merging of ministries and only political will is needed,” she added.

Another NGO, Demokracia Plus, has asked all candidates for prime minister to sign a pledge to adhere to seven “commitments of good governance,” the first of which is a promise to limit any government formed to a maximum of 15 ministries. While a number of parties’ programs are in line with this pledge, the only candidate to sign thus far is Vetevendosje’s Albin Kurti.

While political parties may be known for their astronomical promises, according to Demolli the plan to reshuffle the executive body after October’s elections is realistic and depends only on the will of the incoming political parties. “I think that within a year the plan of reshuffling could be accomplished, but only if parties that seek this plan are committed and offer a concrete plan how to do it,” she said.