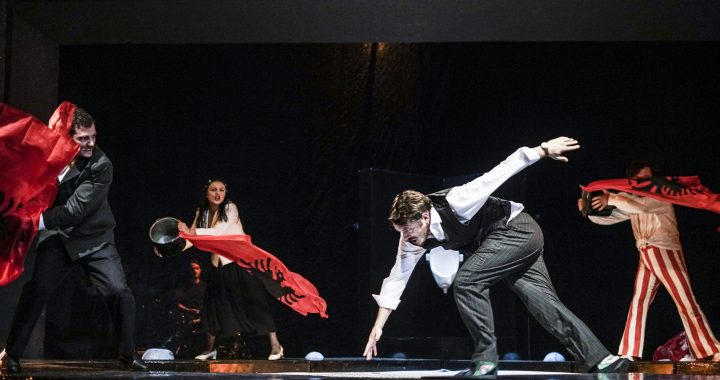 In Five Seasons: an Enemy of the People premieres in Prishtina

A new play, In Five Seasons: an Enemy of the People, finds inspiration in both Ibsen and the real-life story of assassinated former city planner Rexhep Luci, exploring the reality of post-war Kosovo and its impact on today’s young people.

A new theater production from director Blerta Neziraj and playwright Jeton Neziraj, titled In Five Seasons: an Enemy of the People, premiered at the National Theater of Kosovo in Prishtina on Tuesday night.

The play, which will be performed again at the Adriana Theater in Ferizaj on Wednesday evening, is based on the true story of a hopeful and well-meaning urban planner, Rexhep Luci, as he attempts to fix the uncontrollably expanding cityscape of Prishtina following years of destructive illegal building. Numerous forces stand in his way, however: the “construction mafia,” corrupt politicians, a manipulative media and a useless, underhanded UN administration.

The real-life Rexhep Luci was the Director of the Department of Planning, Reconstruction and Development in Prishtina following the war in Kosovo, and was directly responsible for implementing rules concerning illegal construction. After working as an architect for more than 30 years, he was murdered outside his home in Prishtina in September 2000 in what KFOR described at the time as a “mafia” assassination.

“For a long time, I was planning to write something that would describe and talk about post-war Prishtina, its urban transformation – or, to put it correctly, its urban degradation,” said the play’s author, Jeton Neziraj.

In Five Seasons: an Enemy of the People is also inspired by Norwegian playwright Henrik Ibsen’s An Enemy of the People, which features a protagonist who fought against dishonesty and corruption at all costs. According to Neziraj, the correlation between Ibsen’s play and Luci’s life was obvious. “Luci is the man who alone was trying to put order and protect this city, but then he was killed by this construction mafia.”

Actor Verona Koxha, who plays the daughter of Rexhep Luci in the play, said that bringing this blend of fiction and reality to life on the stage was a challenge. “It played a major role throughout our training because we were working so hard to get into our characters,” she said. “It made us aware of the reality that is on-going nowadays. We wanted to transmit a message, there is a clash between the reality and the show, it shows how society and politics has a huge impact on all of us.”

The play touches on the lack of an institutional response to the high number of recorded deaths in the construction sector, as well as the failure of the public to mobilize against illegal construction in Prishtina and the power that companies pushing illegal construction hold over politicians, international organizations and the people of Kosovo alike.

Luci and his daughter are manipulated and threatened by a scheming journalist, a wily and wine-toting UN administrator known as Pierre and the head of a construction company, who boasts a white hard hat adorned with concrete satanic horns. As the play’s characters fight over the construction of a new apartment block in the Bregu i Diellit (Sunny Hill) neighborhood of Prishtina, a literal pissing contest  ensues, assisted by the centerpiece of the play, a standalone urinal in the middle of the stage.

According to Koxha, the play’s title describes the situation of young people in Kosovo, like her character, who are left to deal with the repercussions of men who have exploited the country for economic and political gain. “Five seasons is a metaphor for her physical and emotional wellbeing,” Koxha explained. “She is looking and searching for something else, beyond what life and reality is offering her. She is searching for the ‘non-existent’ season.”

In Five Seasons: an Enemy of the People will be showcased on Wednesday evening in Ferizaj, and will be playing across Kosovo, Macedonia, Albania and Serbia this Autumn. For more information on upcoming shows, visit Qendra Multimedia’s website.