‘A people for justice’ march gathers thousands in Prishtina

Under the slogan “A people for justice,” thousands of demonstrators gathered in Skanderbeg Square in Prishtina on Tuesday to commemorate the third anniversary of the death of Vetevendosje activist Astrit Dehari, and call for justice for his family.

Dehari died in a Prizren detention center on November 5, 2016, having been held in custody for 68 days without interview after being arrested on suspicion of attacking the Kosovo Assembly. Early police statements claimed the activist died due to medication he had ingested, while a later autopsy report declared the cause of death as self-inflicted asphyxiation.

However, outside expertise compiled by the University Center of Legal Medicine in Lausanne and financed by the Kosovo Assembly contradicted the notion that Dehari committed suicide, and recommended that a new investigation was required. In response to the report’s findings, the Basic Prosecution Office in Prizren reopened the investigation into the case on October 24 to clarify the circumstances surrounding Dehari’s death, but the case was then transferred to Kosovo’s Special Prosecution on October 30.

The expertise was sought in part due to a series of protests in 2016 demanding an independent investigation into the activist’s death. Many of the same protesters returned on the third anniversary of Dehari’s death, continuing to seek justice.

Hamit Krasniqi, a 76-year-old who lives in Ljubljana, Slovenia came to Prishtina to join the march, as he did in 2016. “The reason I came is that I still feel pain for the death of Astrit Dehari,” he told Prishtina Insight. “If I don’t join the protest it is as though I wouldn’t do that for my own son. I have four sons and five daughters and I feel that the tenth [child] is Astrit.”

Krasniqi held out hope that a new investigation would resolve the case, but promised to return for further protests if the case was not closed. “I would come and commute the 1,000 kilometers whenever it is needed,” he said. “I’ll even pay for the bus for that.”

Fikrije Buzuku, a 53-year-old homemaker from Prishtina, was moved to join the demonstration by the plight of the Dehari family and to ensure that cases like this do not continue.

“We are really disappointed by our institutions who have not done much to shed light on this case,” she told Prishtina Insight. “We don’t want other cases to be repeated like this: to lose your life and not have any idea about the circumstances. We will not have a future if we don’t have the case closed. It causes the whole country pain, especially the Dehari family.”

Many members of the crowd expressed the idea that Dehari’s case could apply to any citizen of Kosovo, with placards proclaiming ‘Une jam Astriti’ (‘I am Astrit’) a common sight at the demonstration. 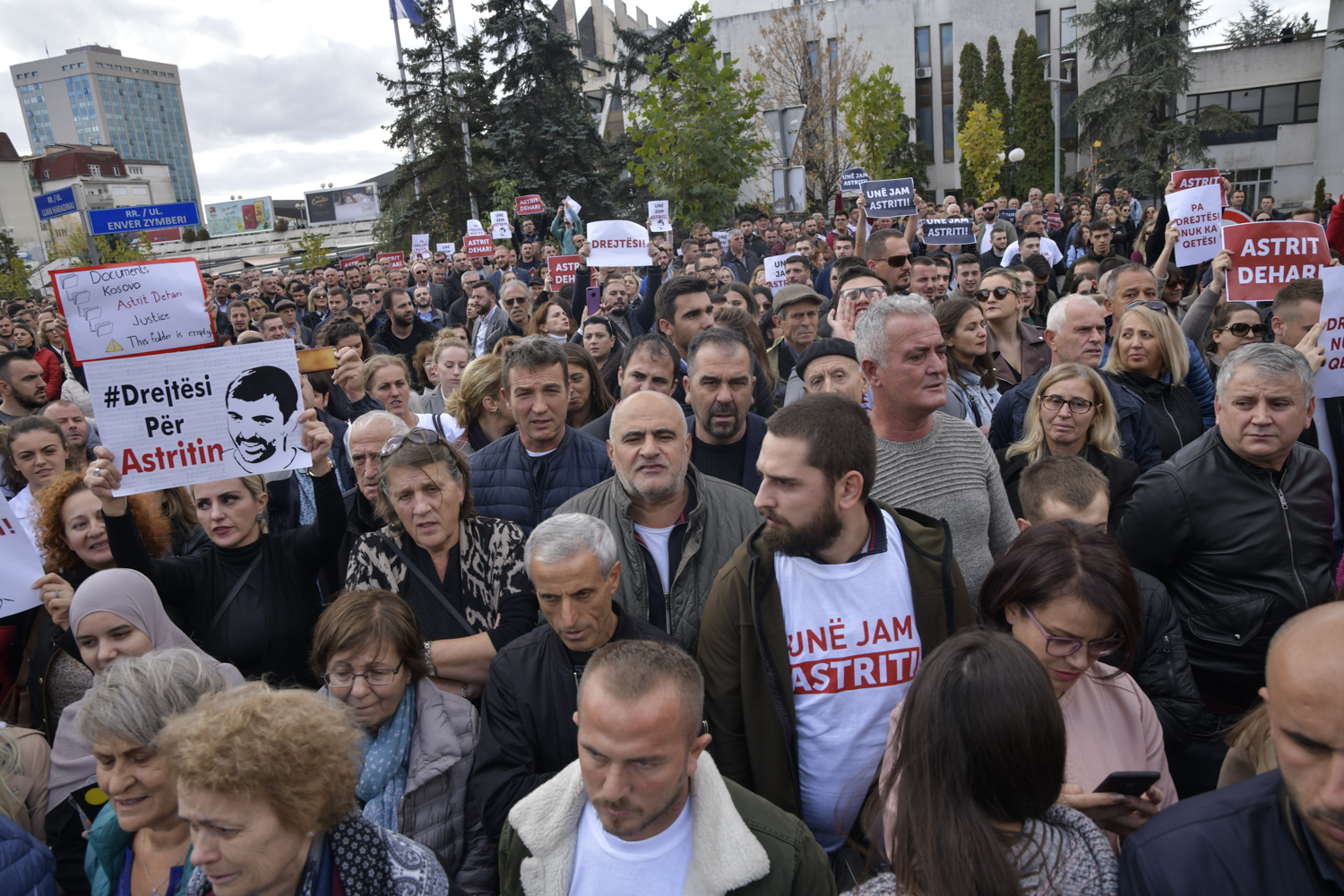 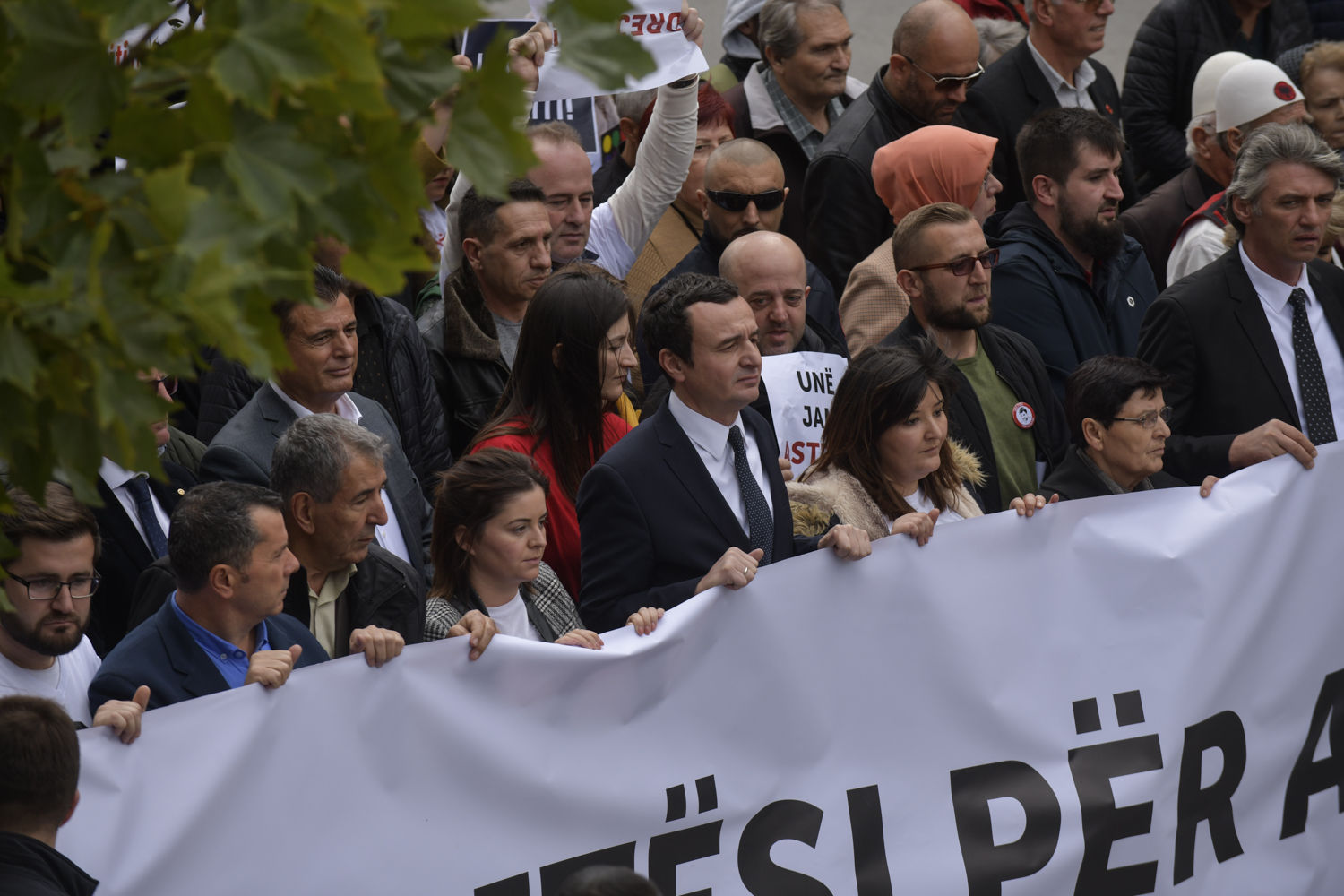 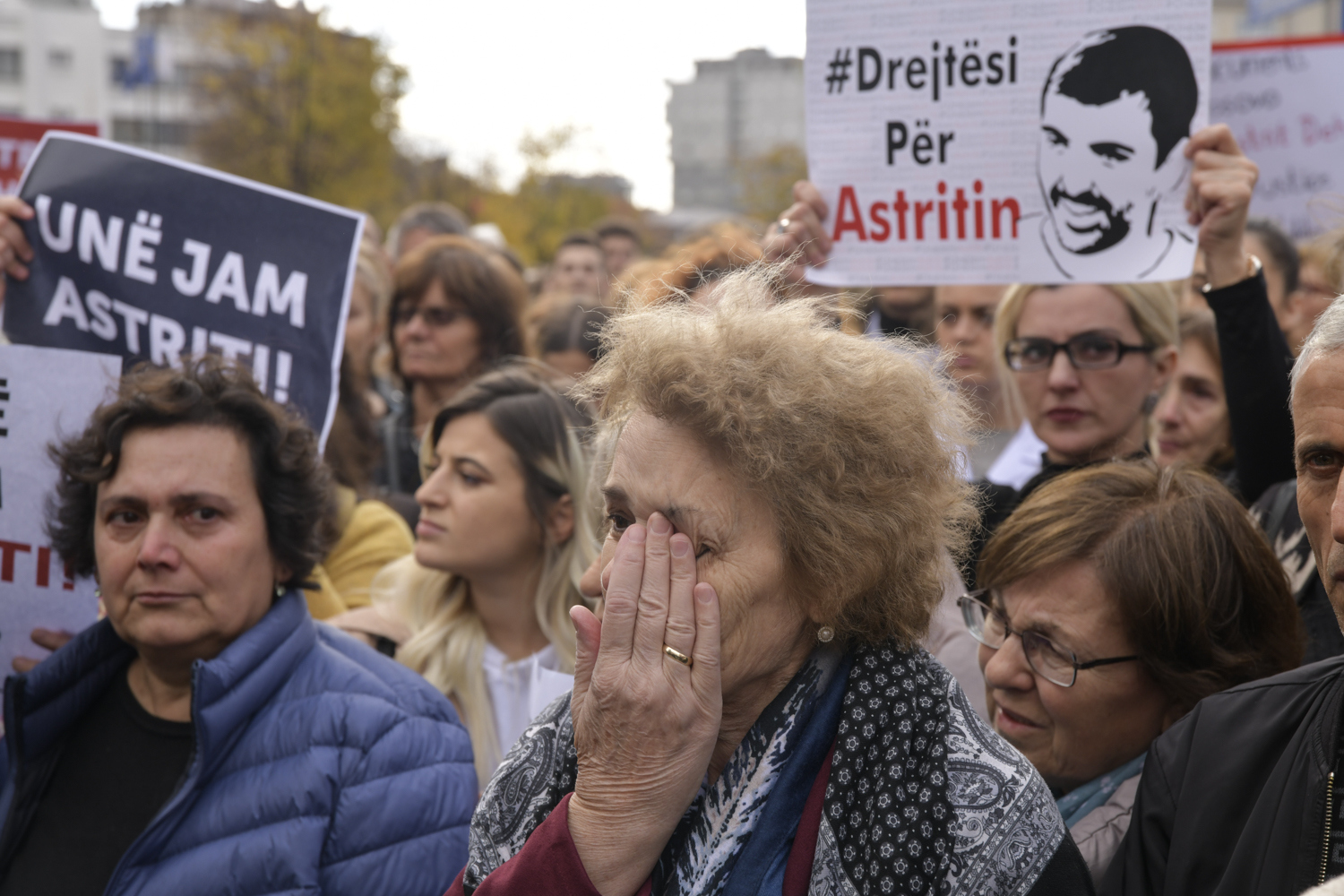 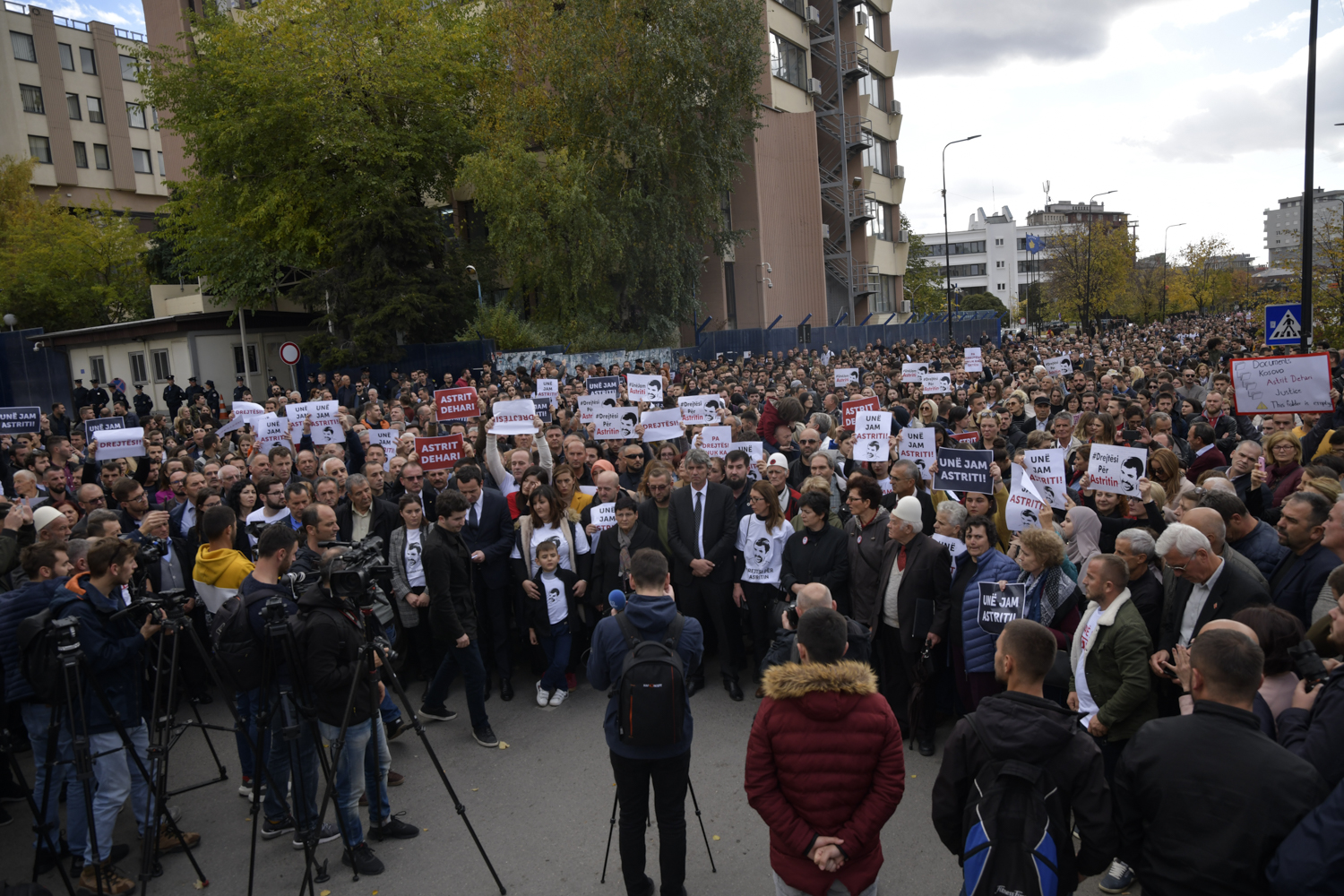 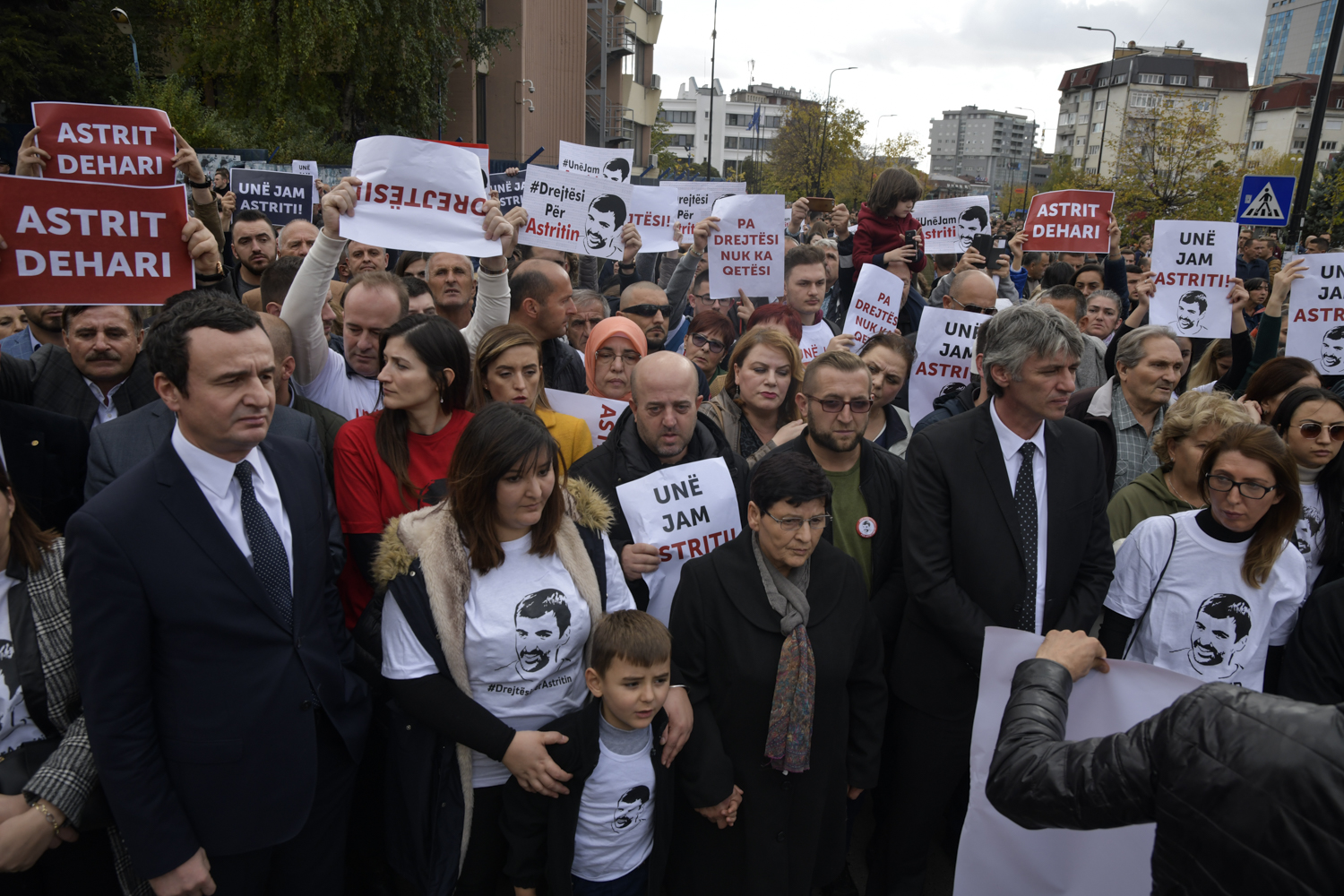 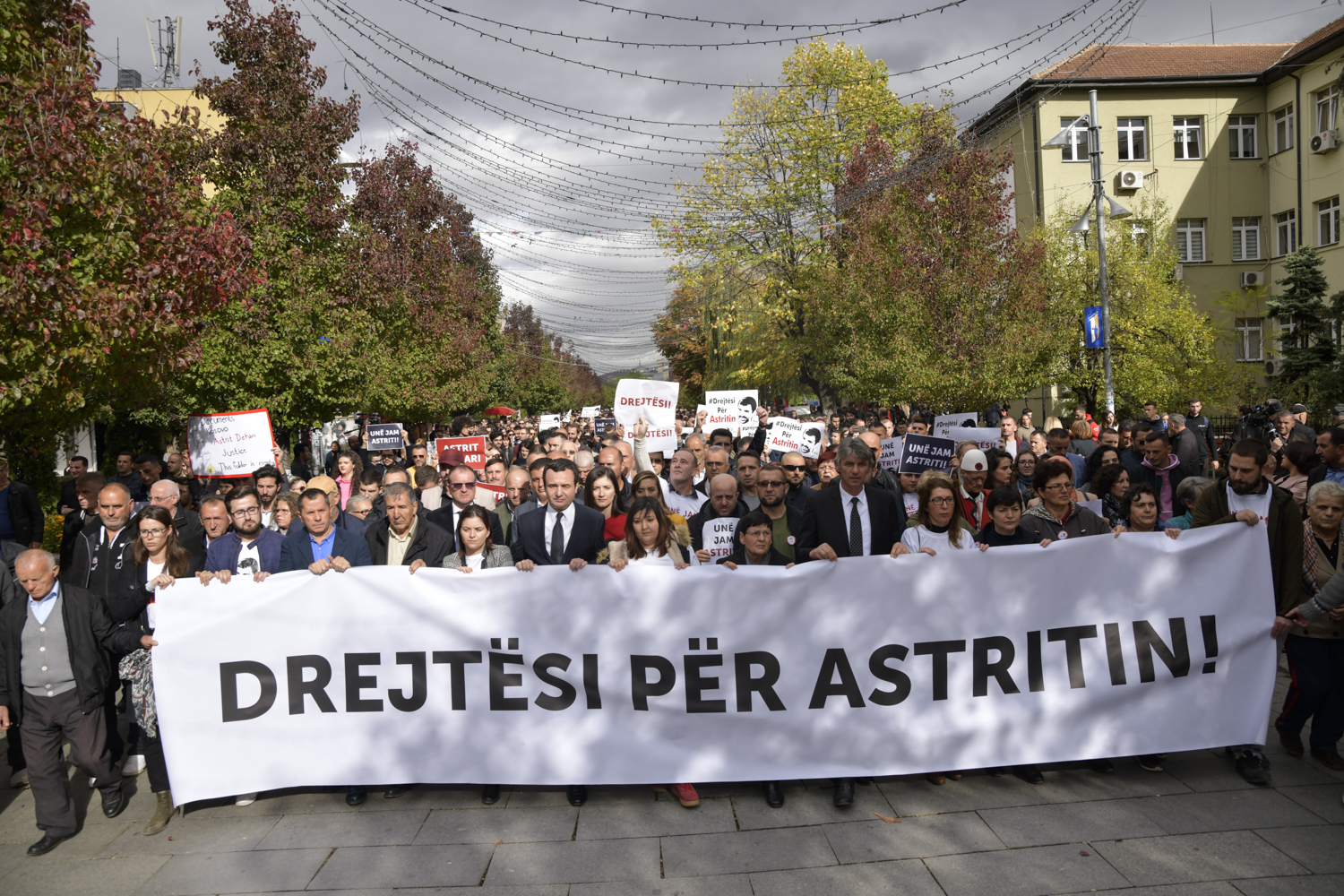 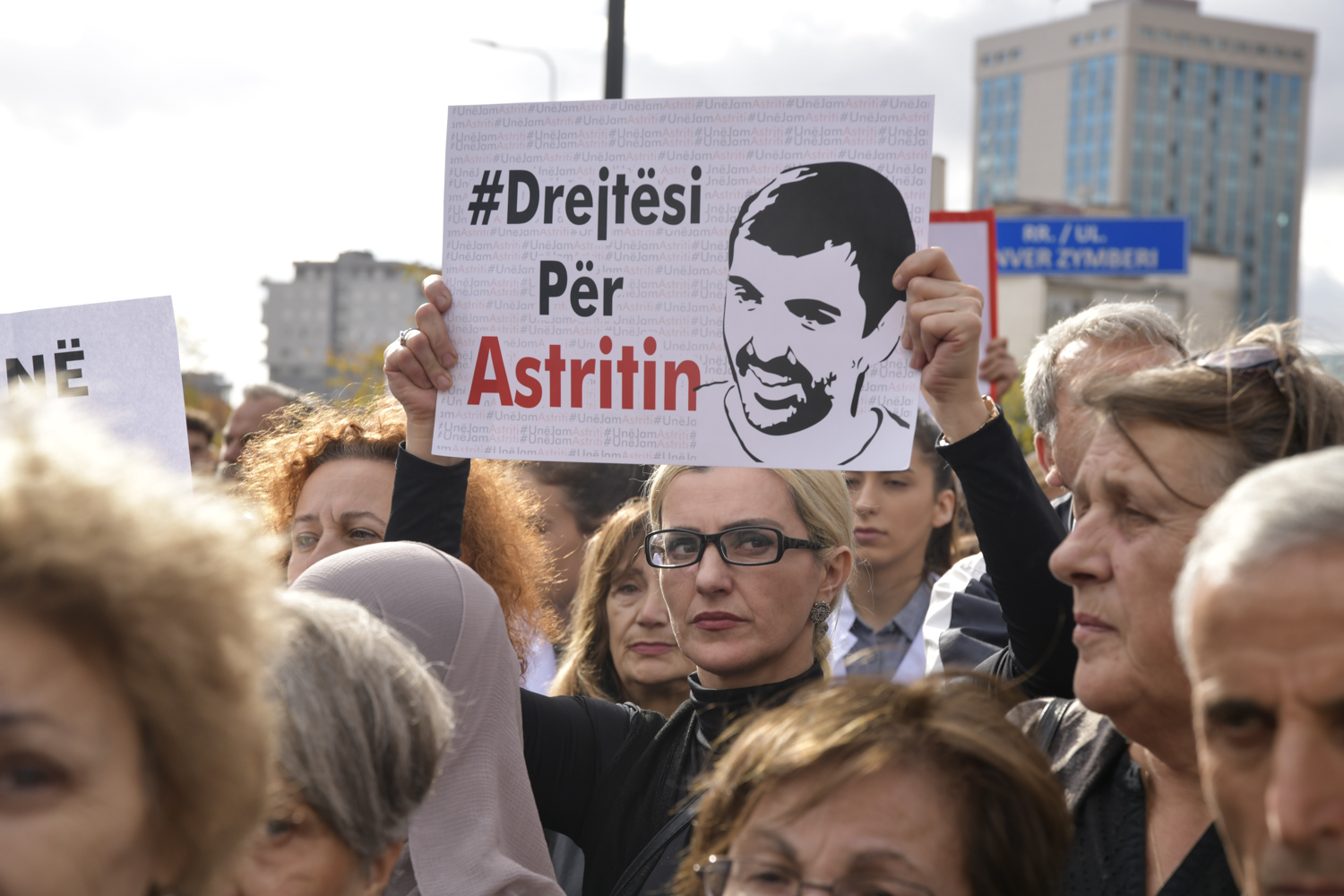 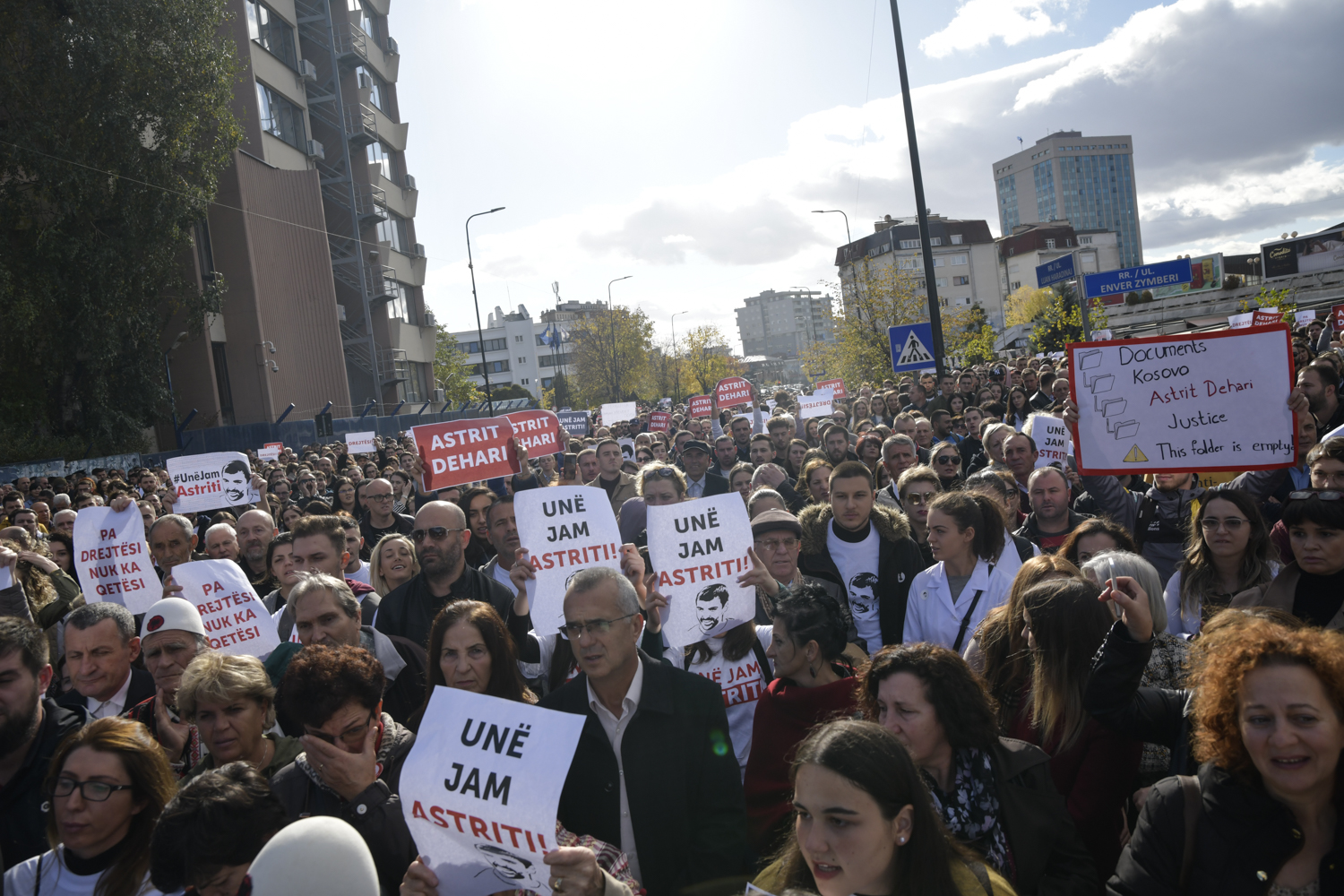 Protesters marched from Skanderbeg Square to the Special Prosecution Office on Luan Haradinaj street, where a series of speakers addressed the crowd on a specially constructed stage.

Rreze Hoxha from the Group for Legal and Political Studies, one of the civil society organizations behind the protest, opened the speeches, stating that the Dehari case is evidence of the state’s failure to guarantee minimal protections for those in its care.

She added that the Kosovo state’s failure to protect its citizens was also demonstrated by the years that followed. “In these past three years, the lies over Astrit’s death have peaked and freedom was guaranteed to his murderers,” Hoxha told the crowd.

Vetevendosje leader Albin Kurti, who is expected to be Kosovo’s next prime minister after the October 6 parliamentary elections, also took to the stage, speaking of the shock felt by those close to Dehari after the events of 2016.

“These three years without Astrit have been long,” Kurti said. “We were shocked on the first day Astrit was arrested. We were shocked when he was accused without any indictment, when he was held in jail without being interviewed and when we were told that we would never see him.”

Kurti added his conviction that justice will be brought in this case. “Astrit is the symbol of our unceasing battle for justice and in this battle we will definitely win.”

In memory of Dehari, Vetevendosje also organized numerous activities throughout the day in Prishtina, including a blood donation drive at the party’s main branch office. In Prizren, candles were lit at 14:00 to commemorate the exact time Dehari died three years ago.

Today’s activities follow a public memorial held on October 28 in Prishtina, in which hundreds of people gathered in front of a recently painted mural of Astrit Dehari following the news about the Swiss expertise.