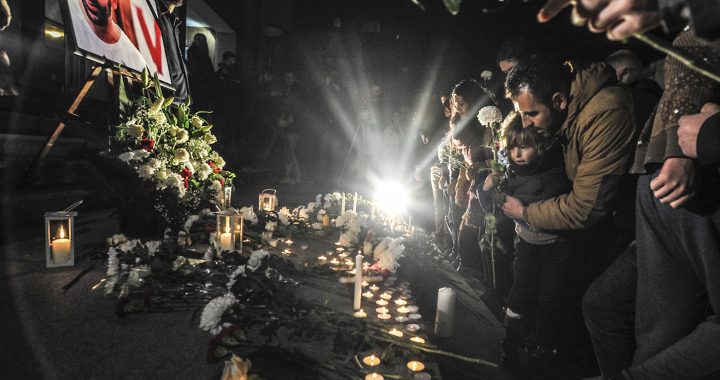 Crowds gathered outside of the National theater to hold a candlelight vigil for Astrit Dehari's death. | Photo: Atdhe Mulla

Vigil for Vetevendosje activist who died in “suspicious” circumstances

Opposition party Vetevendosje have demanded an investigation into the death of Astrit Dehari, an activist who died while in detention in Prizren.

Friends and family gathered in the central Skenderbeg square in Prishtina to pay their respects.

Earlier today, Vetevendosje leader Visar Ymeri and the party’s secretary Dardan Molliqaj blamed the death of Dehari on the government which had “persecuted him unjustly” and “the irresponsibility of institutions” including the correctional facility he was being held in.

Vetevendosje called for an investigation into the circumstances of his death, deemed “suspicious” by the Prizren prosecution.

The family of the deceased has also demanded that the autopsy be conducted in the presence of independent doctors appointed by them.

On Saturday, the Kosovo Police confirmed Dehari’s death, claiming he had died on his way to the hospital. The police also maintained that the death was caused by medication the deceased had ingested.

“The responsibility of the state cannot be ignored,” said Ymeri on Sunday. “We won’t rest until the case is clarified.”

The Ministry of Justice has started an investigation into the circumstances of Dehari’s death.