Young software engineers at Open Data Kosovo are designing a web platform with Amnesty International to research and campaign against human rights abuses in Darfur.

In January of this year, the Sudanese government launched a military campaign against militia groups in the Jebel Marra region of Darfur. Jebel Marra’s isolation and lack of access for journalists makes gathering evidence of the destruction extremely difficult, but according to Amnesty International, there is credible evidence that the government has used chemical weapons against the civilian population.

“The world has turned its eyes away from Darfur, but we need to bring this back to the attention of the international community,” declared Milena Marin, Amnesty’s senior innovations campaigner. Marin and her colleagues have just launched a new campaign called Decode Darfur, which uses crowd-sourcing to locate previously unmapped villages in the Jebel Marra region.

Though Amnesty is able to purchase costly high-definition satellite imagery in order to document destruction, it first needs to know where the villages are located.

Volunteers from all over the world assist in mapping villages from generic satellite images, making it possible for Amnesty International to later discover potential targets of military attacks and verify the situation on the ground.

“Petitions are useful for lobbying and pressure governments, but their meaning has become diluted. People want to contribute in a more meaningful way,” said Marin, adding excitedly that since October 12, when the project was launched, tens of thousands of people joined in. The second phase of the project will involve volunteers comparing imagery of active villages to document destruction over time. The developers of the platform who made this crowd-sourcing possible were taken aback too.

Egzontina Krasniqi, a Kosovar developer and one of the designers for Amnesty Decoders, stayed up late many nights this this month with her team of four to keep up with user hype and to keep the servers from crashing. Krasniqi works for the small Kosovo NGO Open Data Kosovo, ODK. Although ODK worked with other international NGOs in the past, this project is quite new for them too.

“I’m not only learning technical skills. I’ve also learned a lot about Darfur, and to be honest, before this project, I did not know about the challenges people are facing there. I feel that I’m part of a positive change,” Krasniqi said.

ODK’s collaboration with Amnesty is in tune with its values. ODK founder Georges Labreche describes the NGO as a civic tech organization: “we use technology for social good.” Though Labreche’s background is in software engineering, he studied international relations for his Masters in New York. His thesis research explored how government and non-government actors in Kosovo use digital technology to promote statehood and identity building.

While researching in Kosovo, Labreche began looking into founding a software development startup in Kosovo.

“My conclusion was that the market just wasn’t ready for the type of activities I wanted to do,” Labreche said. Though there exists an up-and-coming tech field in Kosovo–the Ministry of Education even suggests that Kosovo could be a potential hotspot for tech outsourcing–Labreche suggests that there is plenty of room to grow.

“But there was an opportunity to build this NGO—to teach software engineering skills within the context of the donor-community’s interests and the interests of statebuilding and capacity building for the country,” he said.

Over the past two and a half years, ODK has collaborated with donors on projects attempting to intervene in social ills, like though its products for the Walk Freely Campaign or E-prokurimi, which address gender-based violence and corruption.

ODK is passionate about addressing social justice issues in Kosovo, but the team is also eager for opportunities to work with international civic organizations. After a fruitful collaboration with international NGO The Engine Room last year, ODK won a bid to work with Amnesty Decoders by offering high quality expertise at very competitive prices.

ODK began its work with Amnesty Decoders in May of last year with the Urgent Actions project. The project was a success with Amnesty’s volunteer network. Still, the positive feedback could have in no way prepared the Decoders team for the sweeping response to Decode Darfur.

Marin agrees. “We’re feeling exhausted but rewarded. The data is quite high quality and the engagement in unbelievable.”

Once both phases of the Decode Darfur are complete, Amnesty researchers will conduct a rigorous assessment of the volunteer contributions before including the data in their reports. Though some people in the organization are still wary of this new crowd-sourcing research method, Marin believes this kind technology will be integral to Amnesty’s work in the future.

“We think it is a valid research method. We rely on various contributors and we have educators helping users in the chat forum–it’s peer reviewed, so to say. More hands on deck for the research helps us collaborate with our local contacts providing information on the ground,” she said. 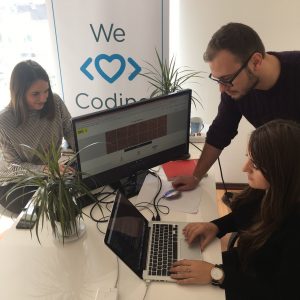 Meanwhile, ODK hopes to continue developing the expertise of young Kosovo techies through maintaining a balance between domestic ventures and projects from international clients.

“We want to be involved in youth engagement and workshops to teach people how to build platforms and contribute to open data projects. At the same time, we want to spot and train local talent that we can then put on board for projects like this. That’s how we generate revenue and continue the growth cycle,” Labreche said.

Vigil for Vetevendosje activist who died in “suspicious” circumstances